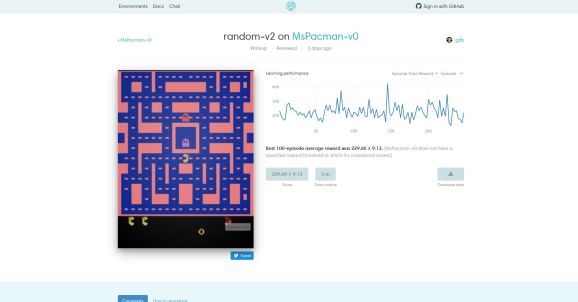 OpenAI, the nonprofit artificial intelligence research company established last year with backing from several Silicon Valley figures, today announced its first product: a proving ground for algorithms for reinforcement learning, which involves training machines to do things based on trial and error.

OpenAI is releasing tools you can run locally to test out algorithms in various “environments” — including Atari games like Air Raid, Breakout, and Ms. Pacman — and a Web service for sharing test results. The system automatically scores evaluations and also seeks to have results reviewed and reproduced by other people.

“We originally built OpenAI Gym as a tool to accelerate our own RL research. We hope it will be just as useful for the broader community,” OpenAI’s Greg Brockman and John Schulman wrote in a blog post.

To be sure, there are other online places for showing off algorithms, including Algorithmia. But that’s a more general purpose repository. OpenAI’s Gym, which is launching today in public beta, is more targeted to a long-studied but increasingly popular domain, one that recently got a lot of attention because it’s part of what Google’s DeepMind research group used in its AlphaGo program that managed to defeat top-ranked Go player Lee Sedol earlier this year.

But there are not very good benchmarks in this area and environments are not standardized, Brockman and Schulman wrote.

“OpenAI Gym is an attempt to fix both problems,” they wrote.