Personal assistants and software bots have enjoyed significant buzz in recent months. New assistants are launched every week, and the Slack App Store already lists more than 40 bots. Working with Opus Research, we have published an update of the Intelligent Assistance Landscape that looks into the implications of this trend.

This report features 110 companies (increased from the 70 participants in the initial report from October, 2015). 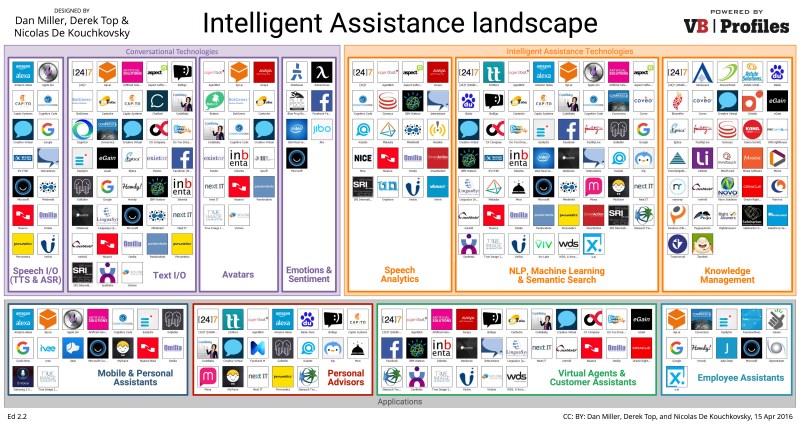 A high-resolution version of this landscape is available here.

The line between intelligent assistants (technologies and solutions combining machine intelligence and conversation to help people accomplish specific goals) and bots (automated or semi-automated tools that carry out repetitive and mundane tasks) has been blurry, making it hard to select truly intelligent assistants. Indeed, many software bots would more aptly be categorized as automated solutions, rather than intelligent ones, based on their ability to have a meaningful conversation with users. (I recommend reading Clement Vouillon’s blog series on the overlap between the two.)

We can point to three major trends that are driving changes in the landscape:

The overlap between knowledge management and intelligent assistance is not new. But consumers’ preference for self-service continues to grow. For example, the use of help or FAQs on a company’s website increased from 67 percent in 2012 to 81 percent in 2015 among US adults online. One of the reasons for this may be that customer service virtual assistants add conversational capabilities to FAQs and search. Also known as virtual agents, these assistants — Amtrak’s Ask Julie, Telefonica Mexico’s Nikko, and ING Netherland’s Inge — can find the most relevant answers by asking qualifying questions. They have emerged as one of the most effective ways for enterprises to share their information and engage users. And the results are powerful: Amtrak’s Ask Julie handled 11 million questions and saved the company over $10 million.

Messaging is the new conversation

Messaging has emerged as the dominant communication platform for any Internet-enabled device. By some estimates, we’re seeing 60 billion messages transmitted per day between Facebook Messenger and WhatsApp, 3X the number of SMS at its peak. On the investment side, venture firms like Andreessen Horowitz have been hunting for the ‘WeChat of the West’. These messaging platforms might evolve to become something akin to a fully-fledged mobile operating system, a funnel through which text, entertainment, payments, and other services all operate seamlessly. (Accordingly, we expanded “Text and Chatbot” into a broader “Text I/O” category in our survey.)

The emergence of bot platforms

IBM was the first to unveil a platform strategy with its Watson Ecosystem. In early 2014, it launched a $100 million venture fund to create an ecosystem of applications. Last September, it announced that more than 77,000 developers used its Watson Developer Cloud. Similarly, Slack, leveraging its Slackbot popularity, propelled itself to the forefront of the bot phenomenon. In December 2015, it introduced its App Directory, which includes a “Brilliant Bots” section. At its recent F8 conference, Facebook announced that the Messenger Platform will make it easier for companies to build their own bots. Microsoft has embraced the movement with its Cognitive Services, announced in March, while Google continues to make technologies such as TensorFlow available in open source. Other platforms are announcing their strategies as well, and will not just facilitate the creation of bots, but will potentially democratize access to conversational and intelligent technologies and unleash incredible innovation.