Moovit, the VC-backed local transit app that helps travelers find the best route from A to B on public transport, has rolled out Uber integration with its mobile app to more than 100 cities around the world. 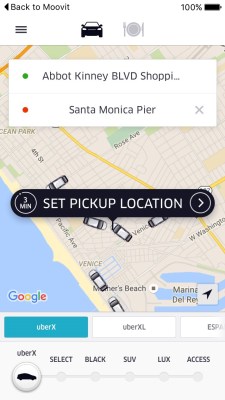 The San Francisco-based company has raised north of $80 million in funding — including a $50 million round last year — since it was founded back in 2011. It has amassed 35 million users across 800 cities since its inception. London-based transit startup Citymapper announced a similar feature in March on iOS, but Moovit is keen to tout the extensiveness of its latest rollout. While Moovit has offered multimodal transit options, with Uber lumped in alongside trains and buses in New York, Los Angeles, Rome, and London since last year, the latest update covers both Android and iOS in 131 cities across 22 countries.

It also signals Uber’s intent to be the de facto, omnipresent taxi service around the world.

“We want to make multimodal transportation an attractive option for everyone, whether they are commuting daily or traveling outside of their home city,” said Andrew Salzberg, global mobility policy lead for Uber. “Our integration with Moovit helps us advance that goal around the world by allowing an entire journey — combining Uber, public transport, and other modes — to be coordinated from one convenient place.”

The benefits of lumping Uber into a transit app are plain to see. Rather than figuring out the optimum route to get to a place by public transport, then checking this separately for a cab, the multimodal approach enables you to include a cab as part of your overall transport options. For example, a cab might not make sense if part of the journey involves going through a city center during rush hour, meaning Moovit may recommend a train for part of a journey, then an Uber car for the rest. It’s all about finding the best route while considering practicalities such as time and price.

“Our goal is to provide our users with the best possible experience on public transport, but there are times when it’s quicker for users to get around via car,” said Nir Erez, Moovit CEO. “By now offering the option to order an Uber for all or part of a journey, we’re able to give our users even more freedom in deciding how they want to get from point A to point B.”