Virtual reality headsets have debuted, but now they need VR content. That’s why HumanEyes Technologies is launching a 360-degree Vuze camera today that can capture images in VR. The camera is available for preorders from today and will ship this fall.

Vuze captures and renders 3D and 2D VR content in near real time. It claims it has a super easy interface and offers the highest quality 2D experience, using 8 FHD cameras. It can seamlessly transfer between 2D and 3D output. And it automatically optimizes VR content for any platform, VR headset, or device to facilitate one-click sharing.

The device is portable and lightweight. It comes with a software studio that captures and renders the images with one click. It also has a ‘selfie stick’ and tripod, a stylish carrying case, and a handle for alternative ways to hold the device.

It can stitch images together for VR, thanks to a proprietary technique called Adaptive Blending that mimics the way the human eye interacts with the brain to form pictures in the mind. Vuze content can be viewed and enjoyed on any VR platform, headset, 3D device, or TV. 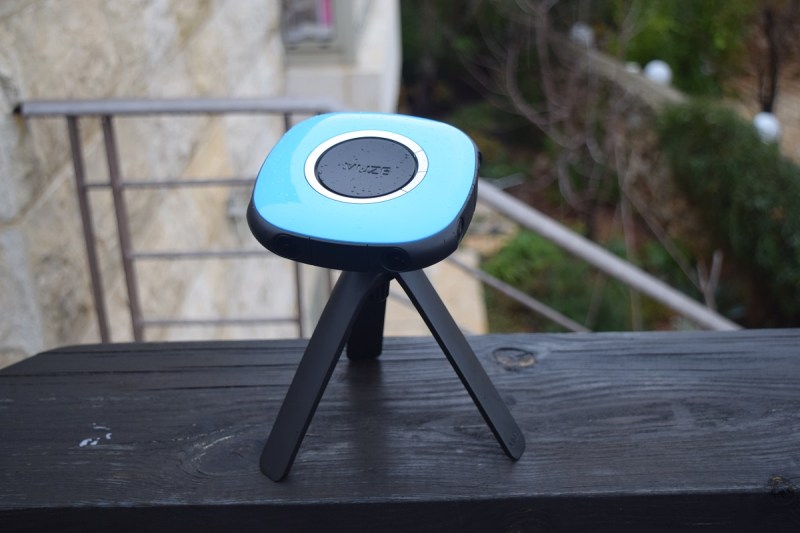 “We are excited to be taking orders of Vuze and believe it will help fuel the creation of immersive content, something all VR platforms are trying to encourage,” said Shahar Bin-Nun, CEO of HumanEyes Technologies, in a statement. “Current VR cameras either require advanced editing skills or in the case of other 3D solutions, demand Hollywood type budgets. With Vuze, we are democratizing VR content creation and putting it in reach of everyday consumers.”

The camera’s battery and removable SD card allow for up to one hour of video capture. The internal processing and compression capabilities produce H.264 HD video files for editing. The camera is available in red, yellow, black, and blue.

Founded in 2000, HumanEyes Technologies currently holds over 70 patents in various fields of 3D-associated technologies. The team created Vuze after more than two years of research and development at the Hebrew University in Jerusalem.

The company’s leadership includes industry visionaries such as Shmuel Peleg, a world expert in computer vision and image processing, and Benny Landa, known as the father of digital printing and former founder and CEO of Indigo Digital Printing, which was acquired by HP in 2002.