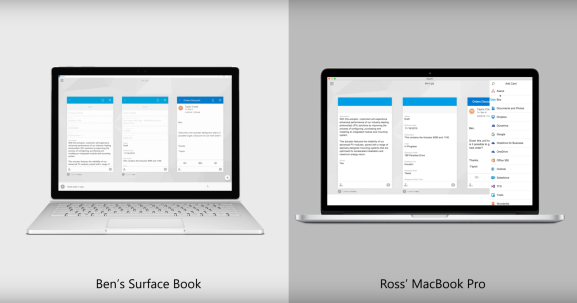 Microsoft today said it’s expanding the preview for GigJam, an application that lets people briefly share parts of what they’re working on with colleagues in order to get their input.

GigJam first appeared last summer. A private preview began two months after that. Now, Microsoft is letting more people try it out, through an “invitation preview” for those who asked for access through GigJam’s website. (If you haven’t signed up, you still can today.)

It’s now available on OS X and Windows, and it will be coming to iOS. Before the end of the year, it will be part of Microsoft’s Office 365 cloud software suite, right alongside Word, Excel, PowerPoint, OutLook, OneNote, OneDrive, and Sway, Vijay Mital, general manager of Microsoft’s Ambient Computing team, wrote in a blog post on the news.

“GigJam helps you spontaneously and momentarily involve others in your work,” Mital wrote. “You just summon all the live information you need, divvy it up by circling what you want to share and crossing out what you don’t and control what others can see or even co-work with you in real time. Now you can finally involve others inside and outside your organization to help you get work done in the moment.”

GigJam has a clean and simple graphical user interface; rather than show entire email or customer relationship management (CRM) windows, it just displays a rectangle with the most essential text boxes from the app, and multiple apps can be used at once, side by side. It supports speech recognition, and it can be integrated with several cloud services, including non-Microsoft applications like Asana, Dropbox, Salesforce, and Trello.

While the software does let multiple people work together, it’s meant for ephemeral interactions, and not everything has to be shared. And the entire team doesn’t have to be working on a single task at the same time. Which is to say it won’t exactly replace Microsoft’s other apps for communicating, like Skype and Yammer. It’s different. In fact, there isn’t a whole lot of software out there that’s directly comparable with it — unlike, say, Microsoft’s Word Flow keyboard that landed on iOS recently, whose functionality is eclipsed by the newly launched Gboard from Google, or Microsoft Flow, an IFTTT competitor. (The use of the word “flow” in the names of the two products is, as far as I know, coincidental.)

Microsoft did not specify whether GigJam will be coming to Windows 10 Mobile or Android.