A new paradigm is rocking the mobile world. It’s the unstoppable shift to artificial intelligence and messaging and away from apps as we know them.

It’s changing the way we use our devices, and it’s allowing brands to interact with customers with more immediacy and ease than ever.

That’s why we’re dedicating our ninth annual MobileBeat 2016 event entirely to telling this exciting new story, hearing from the experts and the brands who are leading the way, and generally debating which platforms, technologies, and strategies are working and which ones aren’t. We’ll do all this through a fully immersive experience at the modern Village space in downtown SF, with the first nationwide botathon (yes, a hackathon for bots — Apply here!), nosh pits, oxygen bar, beer garden, interactive sessions, and a killer party.

We’ll even have an event bot that interacts with participants and manages the botathon. 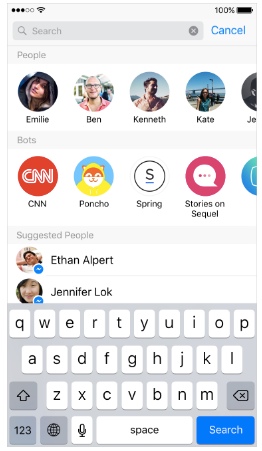 The chat field is in extremely early days, but it’s coming on fast. Facebook launched its chatbot program last month and says “tens of thousands” of developers are building bots for it already. These developers hope to engage with  the near-billion users of Facebook’s Messenger app. We’ll showcase the bots grabbing the most attention.

Facebook has provoked excitement because of its broad reach with consumers. But the revolution is fomenting beyond just Facebook. A host of other companies are driving the massive sea-change toward what insiders are calling the “conversational user interface.” WeChat, in China, is the strongest protagonist here and was much earlier on the scene than Facebook. It’s providing 700 million monthly users with something approximating an operating system for their lives – offering them conversations with businesses directly through APIs. Then there’s India’s Flipkart, which has 46 million users and is experimenting with group commerce chat for 30 million products. (Flipkart’s CTO will be speaking at MobileBeat, too.)

Race to dethrone Google as front door to commerce

We’ll also be learning more about the Slack bot platform, upon which hundreds of developers are building business applications. And, of course, Amazon has its Alexa project, Microsoft has Cortana, Apple has Siri, and Google has Google Voice and Google Now (and will divulge more at its IO conference May 18-20).

Google’s reign is under attack. The company won the first era of web commerce with search. But now there’s a race to become the new front door to commerce, to dethrone Google. All of these other players are rushing to help provide users with a simpler but more powerful way to interface digitally and get things done – through either voice, or text, or a mix. We’ve invited representatives from all of these platforms to speak.

This will be the first independent, significant meetup for senior developer, marketing, and product executives to assess where this industry of AI and messaging is going. It’s designed for leaders to network and compare notes: Which platforms are working well, and for what? Which AI technologies are relevant and ripe for bots? What monetization, analytics, attribution, support, and security solutions should they be using? We’ll have early answers for all of these questions.

Just as important, we’ll be looking at the thriving ecosystem of newer companies springing up all over the place. Just like when Uber, Dropbox, Airbnb, Instagram, WhatsApp, Snapchat, and Supercell became huge companies by dominating the app paradigm, there will most likely be companies that explode with this shift to the conversational interface. In fact, WhatsApp and Messenger are already prime examples. There’s also Kik, and we’ll be hearing from Kik’s business head, Josh Jacobs. These companies all moved so quickly that they became platforms in their own right.

We’re also building the world premier MobileBeat Botathon to see what innovations come from a weekend of developer creativity across the country. We’re planning a nationwide botathon, starting in San Francisco. The other cities will be announced over the coming days (contact us if you’d like to host a local botathon). Finalists will be recognized and rewarded at the event.

Beyond that, we’ll be showcase the most interesting of the new generation of bot companies – those solving specific problems, regardless whether they’re launching independently or riding on the backs of existing platforms (Facebook, Slack, etc).

To be clear, this isn’t just about bots. With the use of artificial intelligence (natural language processing, machine learning), and widespread APIs, workflows are moving toward feed-based and interactive formats where some of the best communication derives from the messages not sent. The bot knows what you want without even asking. Related technologies like Google Now are starting to surface information only when it is relevant for you in the moment. For example, Zillow real estate “cards” surface in a stream when you show interest in searching for homes.

We’ll also have leading brands showcasing what they’re doing (or not doing, and why) when it comes to bots and artificial intelligence: Uber, Sage, Yelp, DoorDash, Airbnb, Weather.com, Booking.com, and more.

Look forward to seeing you there!