Google today unveiled Android Instant Apps, a new project the company is experimenting with that offers users a subset of an existing app. The pitch is simple: Instant apps just launch, no installation required. Tapping a URL can open an Instant Android app even if the user doesn’t have the full app installed.

Google envisions use cases related to visiting a place infrequently, or even just once. An app could offer a superior experience to a mobile site, such as when you want to pay for parking, when you’re visiting a museum, or when you’re spending the day at an amusement park. But most people don’t want to download a full-blown app for such times, nor do they want it to stay on their phone after they’re done with it.

If you close an Instant App, it’s essentially gone. It technically lives on in your cache for a few hours, in case you want to open another such link again, but there’s no app on your home screen. Android can reclaim the space if it’s needed. And, if you do want to keep it around, you can install the full app using the Install button in the instant app’s top right corner.

Although mobile users spend the vast majority of their time in apps, they still visit more websites than apps. This isn’t exactly surprising, as the Web simply has a lot more to offer, but at least some of the reason for this comes down to the friction of app installation. After all, visiting a website can be done in just a tap and in a few seconds, while installing an Android app can take multiple taps and several minutes of going through installation process. That’s a big frustration for developers who have invested significant amounts of time building beautiful and powerful apps.

Android Instant Apps are designed for developers who have already built an existing Android app, not those looking to build one from scratch. “It’s the same Android APIs, the same source code, the same project,” Android Instant Apps product management director Michael Siliski told VentureBeat. “In fact, it’s taken some developers as little as a day to get up and running.”

That said, developers have to modularize their app so that users only download the necessary bits from Google Play. For some, that could take quite a bit more time to complete — it very much depends on the complexity of the app and how the code is structured. 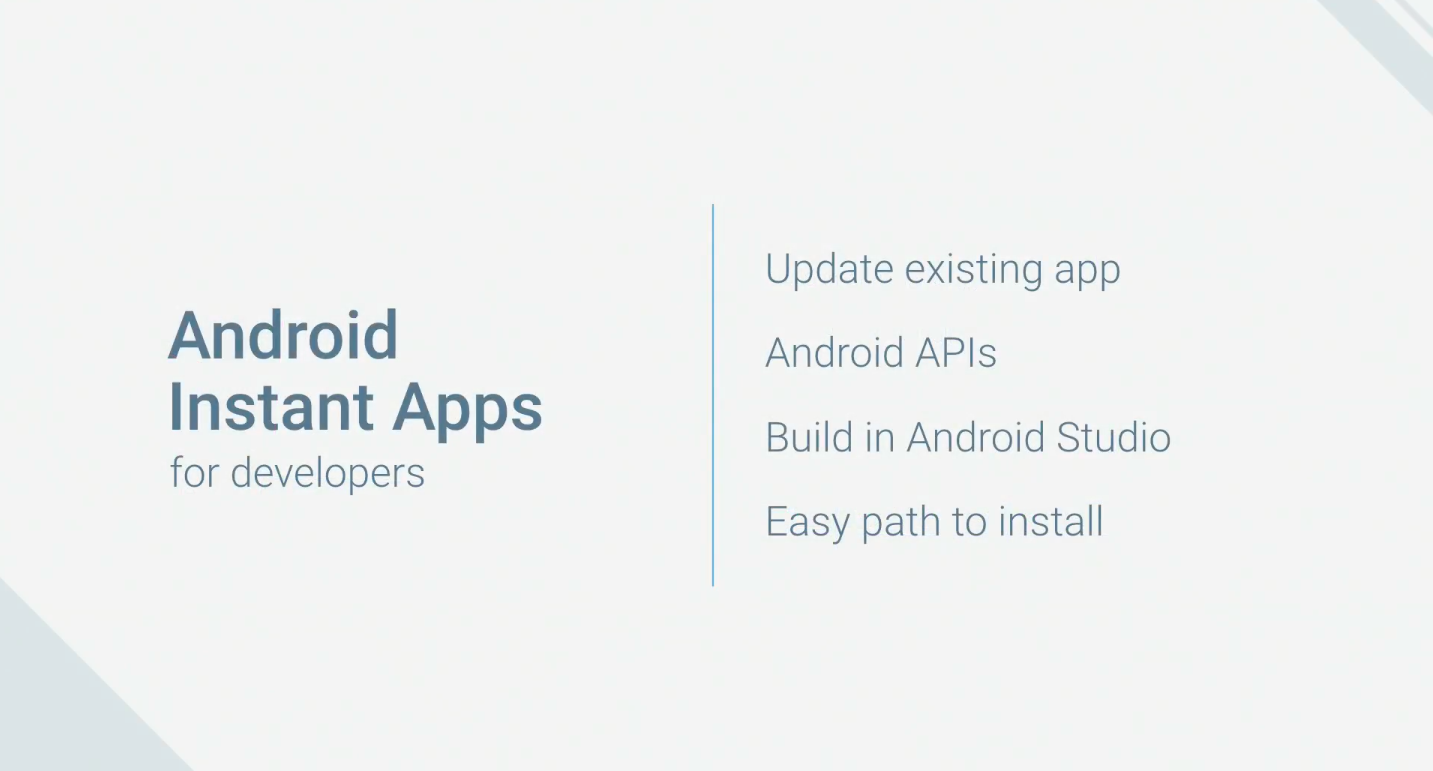 The big surprise for me was that this is not tied to Android N. It works on Android Jelly Bean devices and up, Android Instant Apps engineering director Ficus Kirkpatrick told VentureBeat, meaning over 1 billion users.

While there is no limit on the number of Instant Apps that developers can make, they need to use Android Marshmallow or Android N permissions. But the biggest restriction is that each module cannot exceed 4MB.

The goal is to have Instant Apps launch in a timeframe that is “comparable to a mobile webpage,” Siliski said. That’s “typically a few seconds,” but there is no hard set requirement that Google dictates because the team expects developers are already incentivized to get their load times as fast as possible.

Instant Apps are also compatible with Android app links. That means existing links can be used to launch Instant Apps — Google Play Services does all the work behind the scenes.

That means this is very much a Google Play affair. Android devices that don’t have Google Play installed (including many Android phones and tablets in China, Amazon’s Fire line, and so on) won’t be able to use Android Instant Apps.

Google sees this as a new way to discover apps outside of the Google Play store. The company is offering a massive tease to Android developers, because unlike most announcements at I/O, they can’t actually go out and try it. Google wants to progress very gradually with Android Instant Apps, as this is a big change for both developers and users.

Right now, “about a half dozen” partners are trying Instant Apps: Buzzfeed, B&H Photo Video, Medium, Hotel Tonight, Zumper and Disney. Google plans to gradually expand access and roll out to more partners over the next few months. Android users will start to see Instant Apps “later this year.”