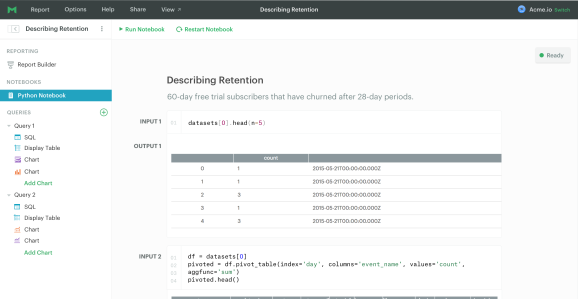 A Python notebook in Mode Analytics.

Mode Analytics, a startup with a cloud service that data analysts can use to query and visualize data, is announcing today that it’s going beyond the SQL query language and adding support for the Python programming language that’s popular among data scientists.

The startup is also announcing new prices. Rather than charging $250 per month for every analyst and giving free access to everyone else within a company, Mode will now charge $19 per month for every user through a new “standard” plan. A more feature-rich and more expensive “plus” plan is also now available. The change reflects the fact that many people start off as regular users and gradually ascend to analyst status.

“Everyone should have access to the same level of analytical tools. You shouldn’t be limited to only being a viewer,” Mode cofounder and CEO Derek Steer told VentureBeat in an interview.

The arrival of Python support indicates that Mode is expanding its relevance beyond SQL jockeys. The startup is trying to appeal to a wider audience. And that could mean competing more directly with data science collaboration tools such as Adatao, Domino Data Lab, and Yhat. When asked about the potential for overlap, Steer said Mode tends to be used for communicating findings to shareholders, while other services focus more on helping people build, deploy, and maintain models.

And Mode could presumably be used as a business intelligence tool. Some of those services require would-be users to connect with salespeople before getting access, but that’s not the case with Mode; if you want to try it, you can just sign up and start right away.

Many Pythonistas are accustomed to working iteratively inside Python notebooks, but those take time to set up, and they’re not very accessible for non-technical people. So Mode has built full-featured Python notebooks into its cloud service. It has also made them the basis for shareable and code-free reports that people can tinker with even if they lack Python know-how.

To help people get up to speed with Python, Mode is adding an extensive tutorial for the language. This sits right alongside the SQL tutorial introduced a couple of years ago. The new educational material in itself could lure users; more than 250,000 people have checked out the SQL material, Steer said.

San Francisco-based Mode started in 2013 and announced a $7.5 million funding round last year.