360-degree videos are all the rage right now.

Whether you’re watching Space X land a rocket, being awed by a massive tornado, or flying with the Blue Angels, the ability to control the viewpoint while watching video makes for an immersive experience.

As I discussed at length during my speech at the recent VRX Europe event in London, the technology has prompted industry-wide conversations around what advertising will look like in this new space.

Today, Adtile — provider of multi-sensor advertising technology — has revealed its latest offering: Adtile 360. The solution offers one possible direction for advertising, interaction, and control in a 360-degree environment.

Adtile 360 allows creators to develop 360-degree videos that are viewed using a mobile device and can track movement and adjust viewpoints based on how the device is being held.

Importantly, Adtile’s technology works on almost any device, from a smartphone to a tablet. It is also browser-agnostic, something that Adtile claims makes it is the most scalable 360-degree video technology available today.

“Currently 360 degree videos are getting a lot of buzz but are not delivering on their fiscal promise to brands in terms of scale (due to devices sensors versus hardware versus browsers versus OS configuration issues),” Nils Forsblom, CEO and founder at Adtile Technologies said. “The two leading ways to browse, discover, and view 360-degree video content are through YouTube and Facebook. Both have limitations (walled garden native apps, and no browser support).”

The product combines outputs from three mobile sensors — inherent to most devices —  to control the video: the accelerometer, the gyroscope, and the magnetometer. The video content responds to rotation, pitch, and tilt with almost no latency, helping the viewer immerse themselves in the experience.

But while 360-degree video itself is not new, and neither is controlling these experiences through motion control, Adtile has some tricks up its sleeve. Adtile 360 adds the ability to overlay emojis and other interactive graphic elements on the video.

Users can place emojis, animations, or specific graphics into the video by simply tapping the screen. This allows them to engage emotionally, adding their own personal creative decisions to the 360 experience, a feature Snapchat users can relate to.

“The appeal of 360-degree videos is that they put you smack in the center of the action,” Forsblom said. “The user is no longer a passive observer, but actively in charge of the medium. That is an extraordinary gift to give to the user and a dynamic vehicle for brands to tell beautiful stories.” 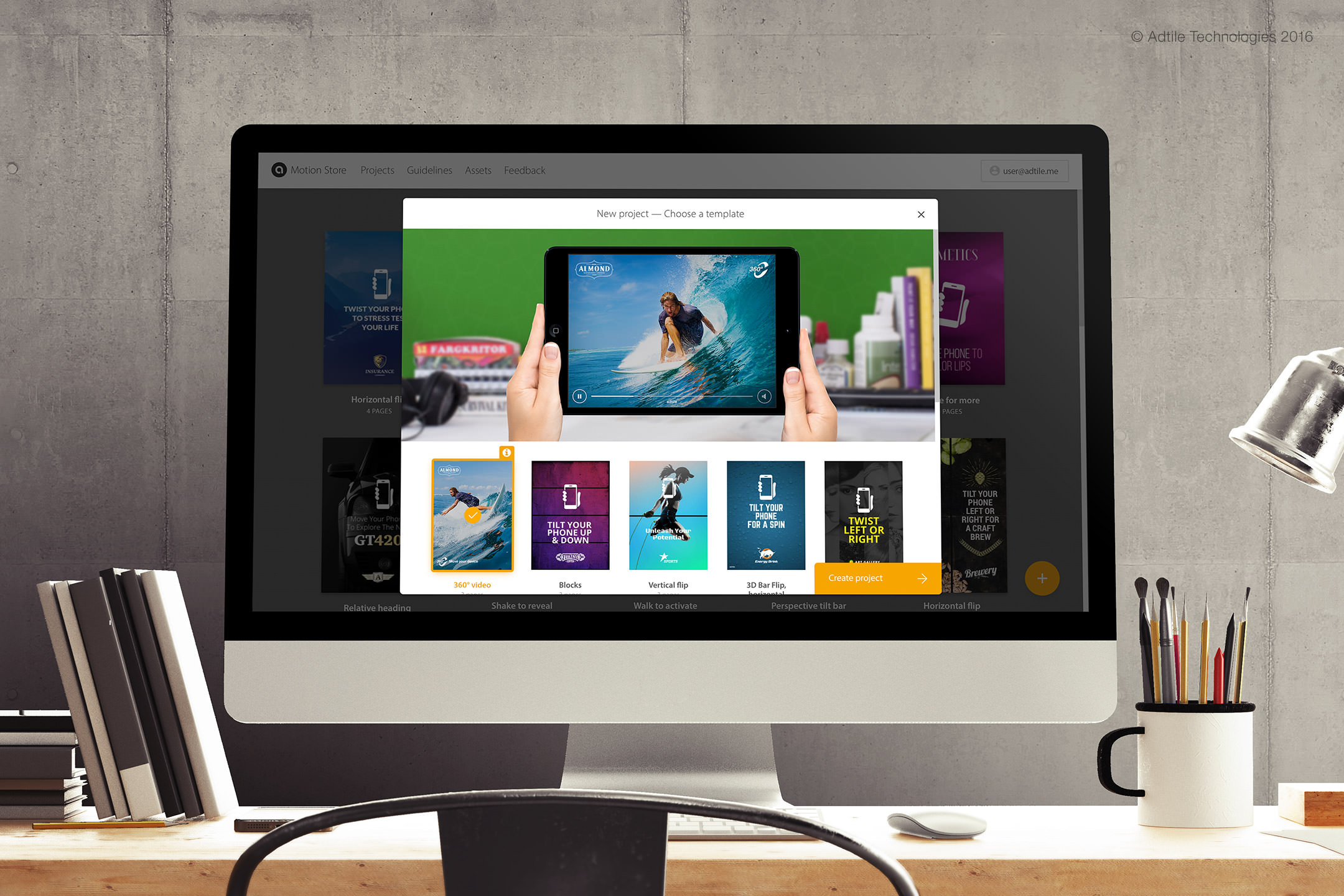 For creators, Adtile’s Motion Store gives media outlets and agencies access to a self­-service, editable video template. Once you’ve created your video design, the Motion Store generates a responsive build for iOS and Android. You can then request standard mobile web and/or MRAID tags for any major ad server with the Adtile analytics automatically baked in. That means Adtile 360 can be served as an interstitial, expandable, or in other custom ad formats.

In other words, ads can become fully immersive, interactive experiences, allowing the consumer full motion control of the view, with the ability to interact via graphics and emoji.

Adtile 360 is available from today as part of Adtile’s Motion Store.