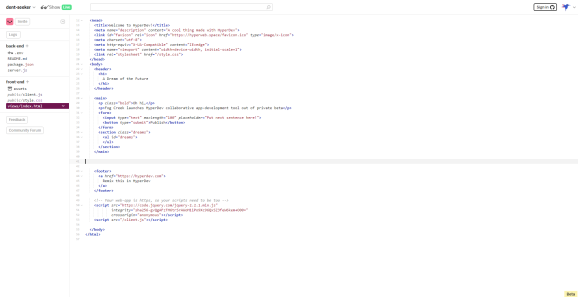 Fog Creek Software, the New York company that came up with Stack Overflow and Trello, is announcing today that its new HyperDev service, which provides an online playground for developing and instantly deploying Web apps, is now available to anyone in open beta. Previously people had to ask Fog Creek for access to a private beta.

HyperDev is fascinating because it takes care of many steps of getting a Web app live and updating it. From the moment you navigate to the HyperDev website, you get an app that’s already running live, complete with a URL and an environment for editing client- and server-side code. You can invite other people to collaborate on the code with you. If you like the project enough, you can save the code to a repository in your GitHub account.

And HyperDev automatically pushes the changes to your app. There is no deploy button. You can see the new code your teammate is adding, just like in Google Docs. And if someone is looking at the actual app in a browser window, they’ll see it change dynamically, no refresh necessary.

“Literally as you type each keystroke, it can be rebooting, the whole server gets deployed,” Fog Creek cofounder Joel Spolsky told VentureBeat in an interview. “We hope to get it down to like 100 milliseconds, ultimately.”

HyperDev is hardly full-fledged, highly flexible cloud infrastructure. It’s not even a standalone platform as a service (PaaS). In other words, it won’t be the ideal hosting service for every application. But for little bits of code that you want to try out to see if they work, this is perfect.

And it’s free — at least for publicly visible projects. Over time, it will be possible to keep projects private, for a fee — just like GitHub.

There is some precedent for HyperDev. JSFiddle lets you edit and deploy code, and Stack Overflow introduced the Stack Snippet feature in 2014. But these services can’t run live websites.

Currently HyperDev only works with JavaScript. Fog Creek is adding Python support, and additional languages will be supported in the future, Spolsky said.

Spolsky is a wizard of software development; his blog Joel on Software has long been a must-read among developers. But that doesn’t mean Spolsky knows everything. He’s not above Googling something, heading over to a Stack Overflow page to find some code that might work, and then plunking it into his file.

In fact, he did that recently when he wanted a feed for a certain type of podcast from a radio station. Over the span of a five-hour plane trip from New York to San Francisco — with Wi-fi all the way, thank goodness — he built the project in HyperDev. The for-loop portion in the app “was the most cut-and-pastey code I had ever done in my life,” Spolsky said. But it worked. And that’s exactly the type of quick programming where HyperDev can shine.

“My goal in life is always just to sort of slap down developers who want to complicate things,” Spolsky said.