A bot platform called Sequel today launched a way for you to build bots with personas, including ones that mimic your own personality.

The Sequel software, which had been in beta testing for months, joins several competitors in the market that have launched over the past year. However, Sequel’s bots are designed to have personality, unlike most bots, which are built to do discrete jobs, like helping you order pizza or order flowers.

In case you missed the news, bot makers are rushing into the market to help design bots that help businesses engage with users on massive messaging platforms like Facebook Messenger and Kik, where an estimated 3 billion users are active. 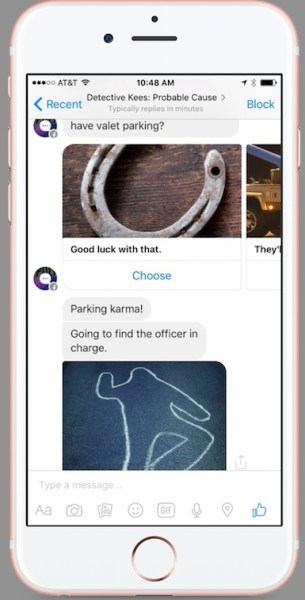 Above: Sequel’s Detective Kees bot was featured on Facebook Messenger

And Google is also expected to get involved later this year by offering a bot platform that competes with Sequel’s. Google director of engineering Ray Kurzweil, speaking recently at a Singularity Conference, said Google is building a way for anyone to create their own unique chatbot by feeding it a large sample of your writing — for example, by letting it ingest your blog. This would allow the bot to adopt your “style, personality, and ideas.” (Kurzweil’s comments, recorded in a video posted by Verge last week, may not have been ready for public release, because the video was suddenly made private last night.) He said elements of the bot project would be ready this year, but didn’t specify details.

Meantime, Sequel has beat any such Google project to the punch. For now, it caters mainly to brands and creators in the entertainment and media industries, helping them build bots that converse with their followers.

A creator without a technical background typically needs about 15-20 minutes to learn the basics of creating a bot conversational flow with Sequel’s software, according to Omar Siddiqui, CEO of Kiwi, the company that built Sequel. After the creator’s initial onboarding, it’s then up to them to write up the conversational creative they want their bot to have. The software offers drag-and-drop tools that let creators employ text, photos, videos, audio, GIFs, emojis, quizzes, and polls.

Sequel designs the flow so that the bot can respond to any question, and to have answers ready (ideally witty ones) in case the bot doesn’t understand a particular question.

Sequel uses natural language processing, which lets the creator’s bot understand as many questions as possible posed by users. It also lets the creator integrate links to web services through APIs. So, for example, if you are a chef, and want to create a bot to share recipes with followers, you can integrate a recipe API. While that does take some technical acumen, Sequel is working to automate these processes for non-technical users. 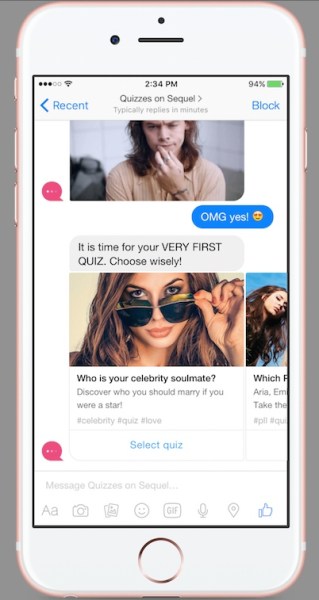 Taking the example of a writer like myself, I asked Siddiqui how much work it would take to build a bot to engage my readers. He responded, “With a couple of hours effort, you’d definitely have a solid bot experience — for example, quite adequate to provide deep dives on a series of issues that matter for that particular day in a news bot, for example.” He continued, “With a day’s effort you can build something quite robust.” The main bottleneck, he said, is in how extensively I want to craft the conversation. If I want to refresh the content every day, it takes some work on the bot each day.

Kiwi was founded in August 2011 and raised about $21 million from Sequoia Capital, DFJ, Northgate, and others. It originally built games with a focus on Android, but has spent the past year focused on this platform for easily building bots. The bots are designed to run on messenger platforms Facebook Messenger, Kik, and Telegram.

Sequel also offers analytics software that lets creators review the behaviors of users and to improve the experience.

Notably, Sequel is offering the service for free to creators and developers. The company makes money by charging premium services for larger partners for whom Kiwi is building custom experiences.

Sequel says it has worked with more than 30 authors, screenwriters, and developers to deliver entertaining experiences in various categories, including adventure, sci-fi, crime, thriller, romance, news, and gossip. Here are a few examples Sequel is showcasing in its press release: