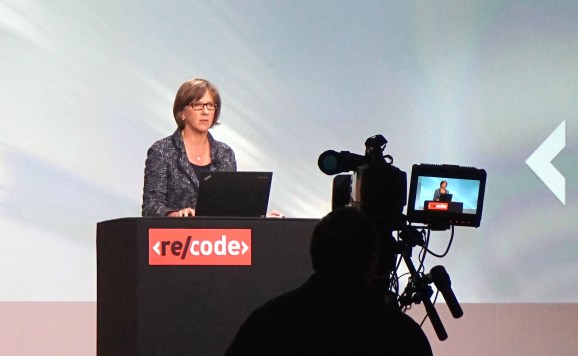 Once upon a time, there was a humble Wall Street investment bank analyst named Mary Meeker.

Yes, I’m aware this is the first time in history that “humble” has been used in a sentence with “Wall Street” and “investment bank.” But stay with me.

Way back in 2001, Meeker was working for Morgan Stanley covering Internet companies. And, like many people who rode the first dot-com bubble to become Internet famous, she was just beginning to try to make sense of the wreckage and ask: What’s next?

That year, Meeker appeared at a conference for a magazine called “The Industry Standard.” For you kids who were born after 2001, a “magazine” is a publication printed on glossy paper with lots of shiny pictures. The Industry Standard was a tech magazine that was briefly a big deal and had lots of cool parties but then imploded when the dot-com bubble went poof!

In any case, that first slide deck was a mere 25 slides and was entitled: “The State of Capital Markets And An Update On Technology Trends.”

Over the years, Meeker’s Internet Trends reports have become a thing.

Eventually, she moved over to presenting her slide deck at the Web 2.0 Summit and then at All Things D conferences, which have now, of course, become the Code Conference, since All Things D became Re/Code before it was acquired by Vox Media and turned into ReCode.

Meeker, meanwhile, went from being an analyst to being a partner at Kleiner Perkins Caufield & Byers, one of Silicon Valley’s most revered venture capital firms. But as Meeker’s star has risen, along with her profile, so have the size of the slide decks.

Shakespeare once wrote that “Brevity is the soul of wit.” Let’s hope he’s wrong for Meeker’s sake. Because when the latest report was posted yesterday, the first thing that caught my eye was the size: 213 slides!

But geez, 213 slides? Maybe it was just my imagination. So I went back and looked at her previous presentations on the KPCB website. And sure enough:

Even more amazing, her slides seem to deliberately ignore the very reason for doing such presentations in the first place. Rather than summarize and simplify, they are crammed full of numbers and charts and bullet points. They dare you to pay attention and absorb an insane amount of data and analysis.

The real question is whether more slides means more insight. That’s hard to measure, of course. If you didn’t know that Internet adoption rates are slowing, smartphone sales are slowing, China is big, India is growing like a weed, video is a big deal, or that smart and autonomous cars could be disruptive, then yes, you might learn a lot here.

However, for the insiders at the Code Conference, I wonder how much of this was really news and how much of the social media applause was just reflexive.

In any case, one thing that can be said is that the slide inflation certainly is an indicator of the expanding role tech plays in every corner of our lives. Certainly, many of the areas mentioned in 2016 were on no one’s radar in 2001.

That said, grab a nice, big coffee and take a look for yourself and see what you learn:

Or, just sit back and watch: