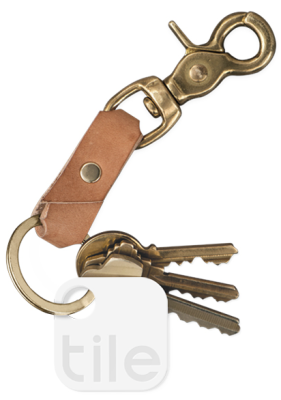 Founded in 2012, Tile makes little fobs that can be attached to almost anything and work in conjunction with a mobile app to help you find keys, wallets, you name it. It also works in reverse, meaning you can find your phone by pressing a Tile. The company says it has sold more than five million of the $25 devices to date, drummed up $43 million in revenue last year, and is gearing up to double that number in 2016.

Mike Farley, cofounder and CEO at Tile, said that the new cash influx will help the company take “aggressive steps” toward achieving true global scale. “Tile’s addressable market is growing rapidly — by 2020, there will be 34 billion connected devices in the world, up from 10 billion last year,” he said. “We aim to give all of those connected devices — as well as the billions of analog items in the world — the power of smart location.”

Farley added that plans are afoot to introduce new Tile styles — covering a range of shapes and sizes — and the company will push to garner greater exposure in third-party retail outlets. It will also open its smart location technology platform to other companies so they can embed their own wares.

Tile is one of a number of companies to receive VC backing for such a device, with the likes of Trackr closing an $8 million round back in October. But today’s news takes Tile past the $30 million mark — it raised $13 million in 2014 and a $2.6 million crowdfunding round before that.

“Smart location is an enormous opportunity and has the potential to become the most valuable application for connected devices,” said Byron Deeter, partner at Bessemer Venture Partners. “With powerful network effects, a foothold in retail and a platform that solves the problem of location for other companies, we are confident Tile will win this emerging category.”