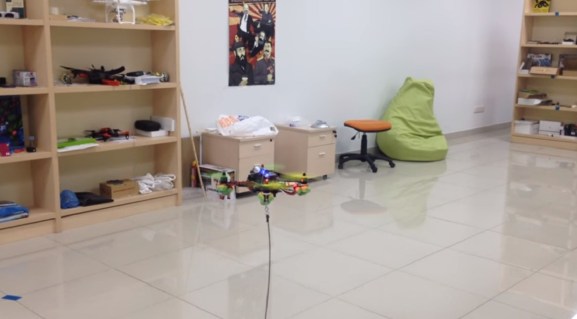 Satellite navigation has been a boon for drones. But there are a lot of places, such as indoors, where you can’t get a signal for the global positioning system, which messes up drone flights.

That’s where Augmented Pixels has provided a solution. The Palo Alto, California-based company has created a way for both robots and flying drones to navigate in GPS-denied environments, both indoors and outdoors.

Instead of GPS, it uses computer vision. And the improved accuracy will lead to a broader range of possible services drones and robots can provide in the future, the company says.

Right now, toy drones are used for very basic operations and games. More expensive custom drones — costing more than $100,000 — are often cost prohibitive. But Augmented Pixels believes it can get cheap drones to fly offline with high precision, or accuracy within one to two centimeters. And it will not require trained pilots or specific knowledge of drone operations.

Augmented Pixels has developed software and other technology that uses a camera to help a drone navigate better.

“We started developing our own technology in 2014 and initially included the robust performance during fast movement and the support for a wide range of sensors in the specifics of our technology architecture,” said Vitaliy Goncharuk, founder and CEO of Augmented Pixels, in a statement. “In 2015, these characteristics turned out to be of critical importance for a number of industries, including car, drones and household robots manufacturing.”

“In the first six months of private demonstrations of our technological platform, it became clear that the leaders of all markets from automotive industry to drone and household robots understood that the future belongs to companies that can simplify the use of its gadgets to the level of an app for the smartphone,” Goncharuk said. “This requires a fundamentally new way of thinking about the design of future systems and user interfaces. Our company’s technology and the platform play key roles in this technology stack.”

Ideally, users do not even need to know how to control a drone/robot, as interaction should take place via an application on their mobile phone.

Founded in 2011, Augmented Pixels has raised $1.5 million in seed funding from The Hive.