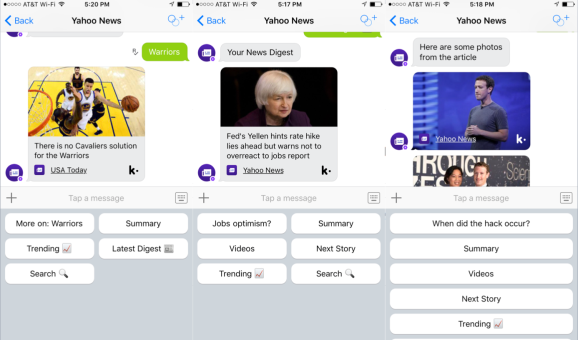 Apple, Amazon, Facebook, Google, Microsoft… and now, Yahoo.The onetime leader of all things Internet is just the latest large tech company to enter the bot and messaging fray. Today, Yahoo unveiled three bots for the Kik platform: @yahoonews; @yahooweather; and @MonkeyPets, a virtual emoji-loving companion. It’s the sort of scrappy move that deserves attention, an act of entrepreneurial defiance by a company facing an uncertain future with the likely sale of its core assets.

Above: Yahoo’s weather bot on Kik seeks to make forecasts a social experience.

Even while some may argue that Yahoo is late to the bot game, the market is still very much in its infancy, and the company’s choice represents a pilot project of sorts. “We chose these three bots in part as a way to learn as much as possible, to test each of the three hypotheses around them and their functionality,” said Jon Paris, senior product director of Yahoo. For instance, @yahoonews is an information bot, @yahooweather is a utility with social sharing aspects, and @MonkeyPets is plain fun.

In the near future, Paris and his team will be monitoring user behavior to learn more about the power of design and suggestive remarks (or prompts) in order to better understand how people interact with Yahoo’s bots. Paris said that the suggestive prompts of @yahooweather are what will distinguish it from other weather bots. The Weather Channel already has a bot on Kik, and, of course, there’s Poncho on Facebook Messenger — which was pilloried for its out-of-context suggestive remarks.

“Internally, we’re working on how to launch better bots faster,” Paris said, though he declined to reveal what bots are in development. “Additional bots could come sooner or later, depending on what we learn.”

Above: Yahoo’s @monkeypets Kik bot is an emoji-loving virtual companion.

By selecting Kik as its initial messaging platform, Yahoo is skirting the platforms of companies with whom it competes directly or indirectly. Paris points to Kik’s early embrace of bots, with more than 6,000 bots in its Bot Shop and 300 million registered users. “Kik provides a meaningful, scaled user base,” Paris said. “We’ll be happy to launch bots on other platforms, but we’re not stating how fast.”

With today’s news, Yahoo enters a rapidly evolving bots and messaging space that is forcing a reconsideration of the primacy of mobile apps as a way to reach consumers. It’s a market that resembles the early days of the App Store, with scores of bots being created daily. The promise of bots is still largely untapped, however, as they offer ways to seamlessly integrate a wide variety of tasks through running chat conversations. “We think it’s just the beginning with bots,” Paris said. “[Next] we’ll be looking at the new types of experiences that get built differently than what you’ll see in an app. We’re definitely seeing new opportunity in the broader messaging space.”