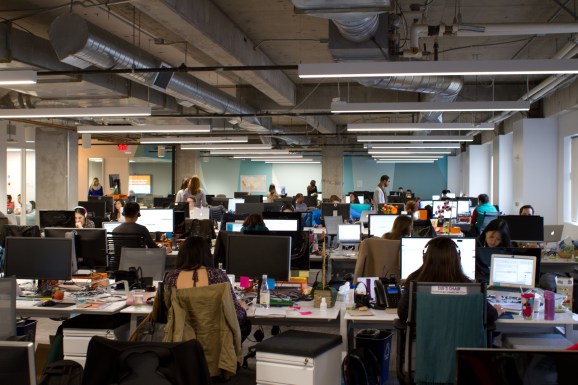 Way back in 1992, I had just been hired for my first professional newspaper job at The News & Observer in Raleigh, N.C. At that point, the paper was still independently owned by the Daniels family, and as part of the new employee orientation, we were scheduled to hear from the publisher.

Frank Daniels Jr., white-haired and attired in a business suit, walked into the room and looked around at all the excited faces eager to hear some inspiring words from the scion of this great Southern family. After a few introductory remarks, Daniels got right to the point.

“I hope that you are all very happy working here,” the publisher said. “And if not, I hope you’ll leave. There’s no sense in making all of us miserable.”

Effectively, Zenefits, the San Francisco-based HR and payroll platform company, just delivered the same message to the 1,000 or so employees it decided not to fire earlier this week. After months of turmoil following a compliance scandal, CEO David Sacks wrote in an email that his attempts at a turnaround were working.

But he made it clear in very polite terms that it is time for employees to get behind these efforts or hit the road:

“I recognize that the new Zenefits may be a very different company than the one many of you joined. I want to be respectful and realistic of that fact. And if you are not motivated by our mission to make entrepreneurship easier, or if you do not agree with the new company values, or if your role has changed in ways that you cannot support, then you can take The Offer.”

According to Sacks: “The Offer is a voluntary separation package consisting of 2 months severance and 4 months of COBRA. Every employee who joined before Day One (February 8, 2016) is eligible and has until noon on Thursday to consider it.”

So, two days to think it over.

The offer is a bold move for Sacks, as he continues his fight to save the once high-flying Zenefits. And it is a remarkable dare that has put the entire future of the company on the line. In fact, in throwing down this particular gauntlet at this particular moment, Sacks is taking a risk that could torpedo the entire company.

Yes, it’s probably quite unlikely. But imagine if the majority, or even all, of the employees were to take The Offer.

Sacks is certainly well-respected throughout Silicon Valley. Yet, there was no talk of resetting option values, and it could be a longshot now for any of those to pay off. And despite reports of growing layoffs in the region, it’s still a pretty tight labor market.

Many of these folks, certainly the most talented ones, would have a pretty easy time finding new gigs. Most likely, headhunters and recruiters have already been circling like vultures for months. Now that this offer is public, I wouldn’t be surprised if there have been a frenzy of phone calls with job offers to tempt them.

As for Zenefits itself, there’s no way to know how much that compensation would cost. I’d estimate it to be around $500,000 based on going salaries in Silicon Valley. But the disruption to the company could potentially be immense.

Though it’s probably quite unlikely, imagine if most employees did leave. Operations would grind to a halt. And hiring to fill those slots would take months, hampered by skepticism that the company is really clear of its problems.

Of course, Sacks probably feels he has his finger on the pulse of employees’ feelings. I’m sure he is confident about how things will go tomorrow.

Yet it’s remarkable that Zenefits, which just one year ago raised $500 million, giving it a valuation of $4.5 billion, finds itself at this dramatic crossroads.

Everything seemed to be going up and to the right for the company until Parker Conrad, cofounder of Zenefits, was forced to resign as CEO this past February amid charges that Zenefits had violated all sorts of compliance regulations. Sacks declared February 8 to be “Day One” and laid out an ambitious plan to salvage the company’s reputation.

That already included firing 250 employees to trim costs. On Tuesday, Zenefits said it was closing an Arizona sales office and firing another 106 people, or about 9 percent of the staff.

Still, Sacks insisted that the turnaround was gaining traction. Revenue had not fallen after the scandal. Customers were sticking with the company. Now he wanted make sure employees were on board.

“I have no idea how many people will take The Offer,” he wrote in the email, “but I’m certain that I want to work with people who want to be here and who are unified in the purpose of what we’re trying to achieve. I’m excited about The Offer for that reason.”

On Thursday, we’ll find out if his faith in himself and his employees is rewarded. Or if Zenefits is headed to the unicorn burial ground.