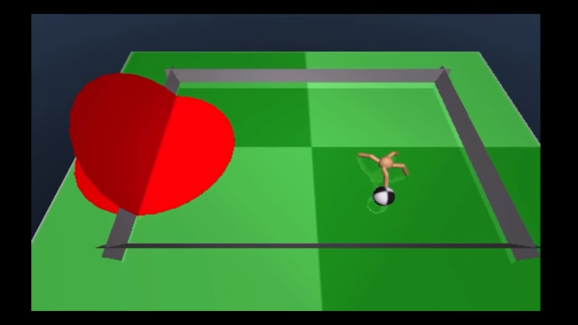 But now the DeepMind software is looking more versatile. Today, the Google DeepMind lab unveiled another feat that looks off-the-wall but is actually evidence of the strength of Google’s A.I. The experiment involves training a little bug to kick a soccer ball into a goal. It’s particularly meaningful because other major technology companies, like Amazon, Apple, Facebook, and Microsoft, are also rushing to enhance their capabilities in this area.

DeepMind largely does its own thing within Alphabet, Google’s parent company. But the technology is being implemented into real products.

“We have also built a massively distributed deep RL [reinforcement learning] system, known as Gorila, that utilizes the Google Cloud platform to speed up training time by an order of magnitude; this system has been applied to recommender systems within Google,” Google DeepMind’s David Silver wrote in a blog post today.

Reinforcement learning generally involves trial and error learning. Google DeepMind combines this method with deep learning, which implies training artificial neural networks on lots of data and getting them to make inferences on new data.

In today’s blog post, Silver described some of the lab’s most recent research.

“We have also developed a number of deep RL methods for continuous control problems such as robotic manipulation and locomotion,” he wrote. “Our Deterministic Policy Gradients algorithm (DPG) provides a continuous analogue to DQN, exploiting the differentiability of the Q-network to solve a wide variety of continuous control tasks. Asynchronous RL also performs well in these domains and, when augmented with a hierarchical control strategy, can solve challenging problems such as ant soccer and a 54-dimensional humanoid slalom, without any prior knowledge of the dynamics.”

The DeepMind group will be releasing its Labyrinth software under an open-source license in the next few months, Silver wrote.