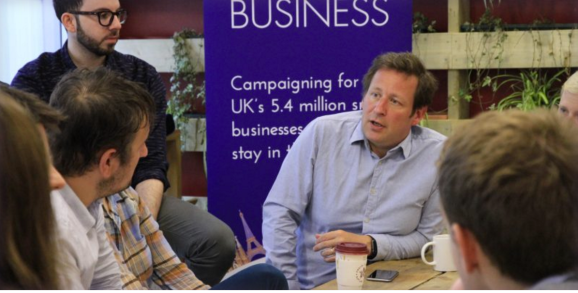 Leaving the European Union would be a “complete disaster for our country”, according to Ed Vaizey, HM Minister of State for Culture, Communications and Creative Industries.

Speaking at an event yesterday at tech members club Runway East, Vaizey shared his views on the impending referendum with a number of technology entrepreneurs and journalists.

The Conservative politician, who is responsible for digital industries, explained how the UK has worked with other EU countries to create regulations that have benefitted both consumers and businesses.

“We pushed through, for example, lowering mobile roaming charges … and we agreed to introduce net neutrality regulation,” he said.

Vaizey went on to say Britain is seen as a leader in shaping the regulations that will lead to the digital single market, which will help businesses as well as consumers, for example in making purchases from websites in different member states.

“So we do pool our sovereignty, but we pool it in a good way to create opportunities for citizens and businesses,” he stressed.

Vaizey is concerned about what would happen to the UK economy if the nation’s voters decide to opt for an exit from the EU.

“Pretty much any serious piece of economic analysis shows that there’ll be a major impact on the economy if [Brexit] happens,” he said.

He claimed the UK is currently the leading tech nation in Europe with great investment opportunities for businesses in the sector, however, this would all change following a Brexit.

“If you’re a big inward investor from the US and you’re looking at Europe in a year’s time after Brexit, you’ll be looking much harder at places like Berlin and Paris than you would at London.”

A great deal of Europeans have come to the UK to set up tech companies, but Vaizey fears they would all immediately begin thinking about moving the day after a Brexit vote.

Vaizey highlighted that the cornerstone of the Leave campaign is the issue of immigration.

“People have strong views about immigration,” he said, “but it’s worth noting that the majority of immigration still comes from outside the EU.”

“There’s a myth peddled that somehow 500 million Europeans are waiting at the border to come into Britain, well they’re not – clearly, we’ve had free movement for many many years,” he added.

Vaizey also mentioned the myth that people coming here from elsewhere in Europe are “spongers or criminals”, and said the tech community knows first hand that this isn’t the case, as most of the people coming from Europe are those who want to contribute to the UK economy.

Additionally, he said European immigrants are not a burden on our health service. “In fact,” he added, “European health services spend five times as much on Brits living in Europe than we spend on Europeans living in the UK.”

Vaizey admitted he has always been, to a certain extent, a Euro-sceptic. He said he follows developments in European regulation closely and has always hoped Europe would not go too far in this respect. However, he went on to say: “Throughout this campaign I’ve become more and more convinced that Brexit would be a complete disaster for our country.”

Concluding, he said: “The facts speak for themselves.”

“Our economy is doing well. We’ve got the lowest level of unemployment for a decade, we’ve grown faster than any G7 nation since we joined the European Union. So the myths peddled about Europe don’t stack up with the facts.”

Present at the event were tech startups Streetbees, which connecting businesses that need data with those who have access to it; Sup, a mobile app that helps users find friends who are available immediately; and fashion, lifestyle and beauty site Grabble.

Rich Pleeth, founder of Sup, explained two French developers work at his company and the only paperwork he had to fill in to get these highly skilled workers over to the UK was the fight booking form on the Easyjet website.

He said this ease of movement of skilled workers within Europe serves to make the UK much stronger.

“We are the future the fifth largest economy in the world. We are doing very well for a small country, and we’re all obviously immensely proud to be British, but I’m also hugely proud to call myself European,” he added.

Daniel Murray, co-founder of Grabble, is a born-and-bred, and extremely proud, Londoner.

“One of the greatest things about being a Londoner is you absolutely believe in multiculturalism and you believe in a being part of a metropolitan society where people from all walks of life merge.

“I’ve been very fortunate to go all over the world and never seen anywhere with a better sense of culture than London. I think it’s an amazing thing and a poster for what the future of the world should be.”

Tugce Bulut, founder and CEO at Streetbees, is from Istanbul, Turkey.

“I started Streetbees in London, but I had the choice to go anywhere. After thinking about Berlin, Istanbul, Lisbon, New York, I chose London to start this business.

She said the reason for this is because of the easy access to international talent, explaining that, of the company’s 22-strong team, 14 are European.

“If we lose this ability to stay here, due to our employees from being all over Europe, we will have to relocate. It’s not up for discussion. We can’t lose this talent,” she added.

Fintech Times’ Bird Lovegood added his two cents, hypothesising that, if the UK decides to exit, there would still be ample opportunity to create policies that would attract foreign talent to the UK.

Vaizey wasn’t convinced, though. He reiterated that one of the main arguments of the Leave campaign is that the UK needs tighter immigration controls, so it’s unlikely such a policy would be backed.

Regardless, even if that’s what the government did decide to try and push forward, we would have to start from scratch and negotiate the kind of frictionless regulation that currently exists across Europe, and hope we can ensure a situation where UK companies can easily trade across the continent, Vaizey concluded.