Virtual agents and chatbots will be the top consumer applications of artificial intelligence over the next five years, according to a consensus poll released today by TechEmergence, a marketing research firm for AI and machine learning.

The emphasis on virtual agents and chatbots is in many ways not surprising. After all, the tech industry’s 800-pound gorillas have all made big bets: Apple with Siri, Amazon with Alexa, Facebook with M and Messenger, Google with Google Assistant, Microsoft with Cortana and Tay. However, the poll’s data also suggests that chatbots may soon be viewed as a horizontal enabling technology for many industries.

“The most unexpected result was that so many founders who were not directly involved in the chatbot space or smart home/device space were very excited about these areas,” wrote Daniel Faggella, founder of TechEmergence, in an email interview. “Of course x.ai is excited about their technology, but many other founders expressed interest in this area (for consumer applications), particularly in chatbots — it seemed that many founders had thought through a lot of the provided use cases and there was a general sense of optimism in this space.” 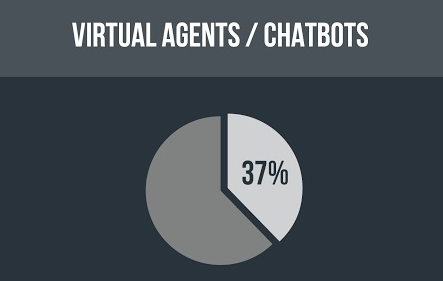 Above: 37% of executives surveyed say virtual agents and chatbots will be top consumer application for AI over next 5 years.

TechEmergence gathered data from 35 executives from artificial intelligence companies in April and May of this year. Faggella described the findings as representing a “hive mind” of the AI industry. “When it comes to applying AI in general, the direction of AI, I find that founders and executives, whether 50 or 25 years old, tend to ask ‘what is Facebook doing, what is Amazon doing’, and these things are to them indicative of where the industry is going, including smart homes and chatbots,” Faggella said.

The survey also points to the growing importance of the intelligent assistance market and the battles to come between the likes of Amazon, Google, and Apple. “Amazon’s Echo was massively successful for what it was, a very early adopter product, but it got much broader adoption; they sold it well, sold it succinctly, and now Google is going into [the] same game,” Faggella said. “The smart home needs a brain and it won’t be hubbed in your washing machine, appliances will never be the brain. [It will be] the thing that sits in the center of your kitchen that the whole family can talk to, that thing is now the hub of the smart home, a place where it all gets plugged in.”

While 37 percent of respondents selected virtual agents and chatbots as the top consumer applications for AI, other applications included smart objects/environments (20 percent) and physical embodiment (11 percent), which describes robots, movement, and sensors.