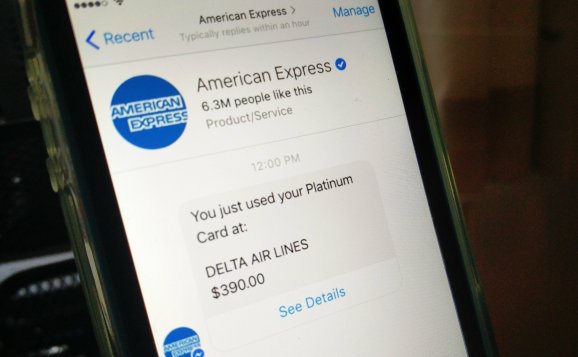 American Express today unveiled plans to introduce an Amex bot to Facebook Messenger that would let customers receive real-time purchase alerts and key information about benefits related to their purchases.

The finance giant was at the Cannes-Lions Innovation festival in France to discuss some of its bot-related plans, though it didn’t give any specific details about the roll-out beyond an intended pilot phase for card-holders in the U.S. in the coming months.

Among the examples provided, users buying an airline ticket to New York would not only receive an alert direct to Messenger confirming their purchase, but they may also receive a reminder that they have complimentary access to an airport lounge, or even one with restaurant recommendations.

Based on the company’s demo video, Amex’s new assistant wouldn’t adopt a conversational approach like many of the chatbots around at the moment — it appears that the bot asks “yes/no” questions with answer buttons for the user to click.

Rise of the bots

Facebook first unveiled plans to expand Messenger beyond a simple messaging app and into a platform at its F8 developer conference last year. The idea behind the move is that Messenger will be used to underpin myriad third-party services, effectively replacing email between businesses and consumers. Retailers Everlane and Zulily were among the first partners announced, while KLM became the first airline to jump on board earlier this year to enable travelers to receive boarding cards, flight confirmations, and customer service through Messenger.

A growing number of companies have embraced the chatbot trend since — just today travel-planning search engine Hipmunk joined the party with an A.I.-powered assistant that gives automated advice to would-be travelers.

Amex and Facebook have long worked in partnership together, including a program that analyzes what you “Like” on the social network to serve up tailored offers. But now, the duo are looking to take things to the next level.

“We know our card members appreciate the convenience of receiving information from Amex on digital platforms where they’re already spending time,” said Dave Wolf, vice president of digital partnerships and development at American Express. “The concept demoed today shows how we could help them stay on top of their purchases and take advantage of their card benefits. The scale and flexibility of the Messenger platform makes it a powerful channel for us to explore new ways to connect with card members.”