BitTorrent has announced an overhaul of its Bundle platform, with a new name, mobile-focused apps, and ad-supported streaming monetization for creatives.

To recap, BitTorrent launched Bundles back in 2013 with the promise of giving artists control over how their work is distributed and how they connect with their fans. In a nutshell, a BitTorrent Bundle is akin to a new file format that lets musicians, moviemakers, and others distribute their creative content — not through iTunes, YouTube, or Spotify — but in bundles that are shared directly between users. The peer-to-peer approach works in much the same way as the traditional BitTorrent file-sharing protocol commonly associated with piracy, except Bundles add commerce to the content and community mix to ensure creators get paid.

In the years since the launch of Bundles, a number of high-profile artists and companies have turned to the BitTorrent model to publish their wares, from Radiohead’s Thom Yorke to Sony Pictures Classics and the BBC. BitTorrent launched paygates back in 2014 to let publishers set the price for their handiwork and keep 90 percent of the proceeds.

Now, the San Francisco-based company is doubling-down on its efforts by changing the name of the Bundle platform to BitTorrent Now and opening up to ad-based revenues with pre-roll ads that net creators 70 percent of revenues. 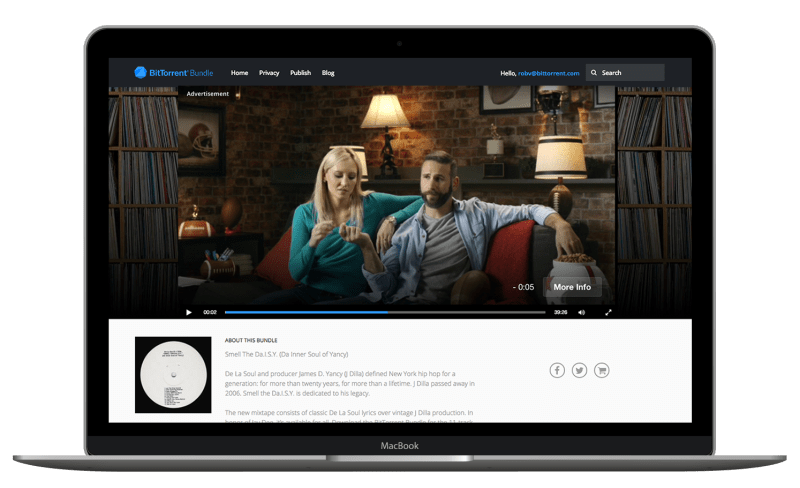 In addition to ads, BitTorrent is also now pushing to build a cross-platform media experience encompassing desktop, TV, and mobile. Part of that involves new streaming apps, which are rolling out today for Apple TV, iOS, and Android.

BitTorrent (full name “BitTorrent Inc”) is better known as the company that develops the BitTorrent peer-to-peer (P2P) file-sharing protocol, as well as the uTorrent app that’s built on the protocol. Once synonymous with illegal file-sharing and piracy, BitTorrent has long since moved to establish itself as a media distribution company, with multichannel video streaming apps and original TV shows emerging from its vaults.

In 2013, BitTorrent launched a new product called Sync to let users share folders and files without relying on the cloud. But last week, BitTorrent announced that it was spinning out its Sync business into a standalone company called Resilio, as it looked to refocus its efforts on the consumer media realm. And the latest shift in that direction comes with the repackaging of Bundles, a move that comes two months after BitTorrent replaced CEO Eric Klinker with two new co-CEOs — Jeremy Johnson and Robert Delamar.

“We believe we can help solve some of the most troubling problems facing creators in the digital age,” said Johnson. “The internet has the promise of a direct connection between creators and fans: the ability to facilitate a dialogue and a collaboration. Yet, in the digital age, art has increasingly become commoditized. Existing platforms impose business models, format restrictions, algorithmic discovery; all of which are barriers between artists and fans … the creative vision and connection to fans is not a priority.”

The BitTorrent Now apps support ad-supported streaming for both video and music, while the web-based incarnation additionally offers email subscription and transactional streaming and downloads. Ad-supported streaming is launching initially as a pilot program before being made available to all publishers at a later date.