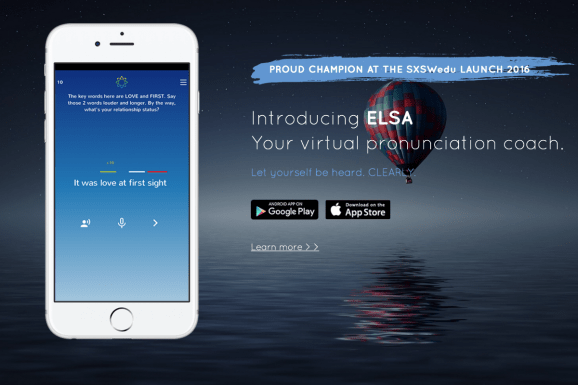 Want to learn to talk like you’re from Kansas? Pick up Elsa Speak. It’s an app that uses machine learning to teach the pronunciation of a Midwestern accent.

”We chose a Midwestern accent because we talked to a lot of speech therapists and they said this is the most commonly understood accent that people should learn,” Elsa founder Vu Van told VentureBeat.

Using machine learning, Van plans to extend Elsa to other accents. The same app that Van used to reduce her native Vietnamese accent could help an American moving to Vietnam learn a local Vietnamese accent. The company has received several requests from Americans who want to learn a British accent.

Van was inspired to create Elsa because she has seen the income gap that can occur due to a lack of proficiency in English and believes research that says a thick accent can negatively impact a person’s credibility. “Growing up in Vietnam, speaking English is a big advantage. You can go into a job interview and just because you speak better English they automatically give you a better job,” she said.

Since March, Elsa Speak has been downloaded 90,000 and has more than 70,000 users. In April the app was named winner of the SXSWedu Launch 2016 startup competition. Elsa stands for “English Language Speech Assistant” and is available for both iOS and Android.

The app is trying to walk a fine line – change people’s speech and accents, but encourage them to keep their identity. On some level accent is a practical matter. Thick accents can be incomprehensible or cause non-native speakers to lose confidence. Accents can also carry connotations of culture and class.

“We don’t want to give anybody an American accent. What we want to do is give people that certain level of understandability and fluency so you step over that hurdle of being not talented and people judge you. We say you should keep your own accent so you can keep your own identity, and that brings certain truth to what you say,” she said.

Elsa users are primarily from the non-English speaking world but there are also users from say, Atlanta, as well as other native English speakers, Van said.

In the future Van wants to use machine learning to improve recognition of accents for the Siris and Alexas of the world and work more closely with speech pathologists to assist people with speech impediments. “We build our own voice recognition technology that give us that unique ability to detect the errors when people speak English,” she said. “And when they do their pronunciation we then tell them exactly what sound or vowels or consonants they don’t pronounce correctly after their say the sentence.”

Elsa Speak users are primarily professionals and students, but love is also a chief motivator. Open Elsa Speak and the initial topic you’ll discuss with the app is a first date, and that’s no coincidence. “On our first release we pushed three topics: business, travel, and love, and we see a double engagement on love topic,” Van said.

Elsa Corp is based in San Francisco. The company closed a $1 million seed round in May and has raised $1.25 million from investors since it was created in 2015.