Millennial job search company FirstJob debuted its recruitment automation bot Mya today. The company says Mya automates as much as 75 percent of the recruiting process, and in doing so makes life better for job seekers and businesses.

FirstJob works with a mix of tech companies, like Fitbit and Evernote, along with startups and legacy Fortune 500 companies.

The application assistant uses artificial intelligence and natural language processing to ask a few questions, verify qualifications, and answer questions from job applicants about things like company culture, policy, and benefits. Initial tests found that applicants who engaged with Mya were over three times more likely to hear back from a recruiter or hiring manager, the company said.

After a person finishes a traditional application, Mya works natively in FirstJob, as well as in Facebook Messenger, Skype, email, and SMS.

If Mya finds that an applicant fails to meet job qualifications, the bot may say something like this: 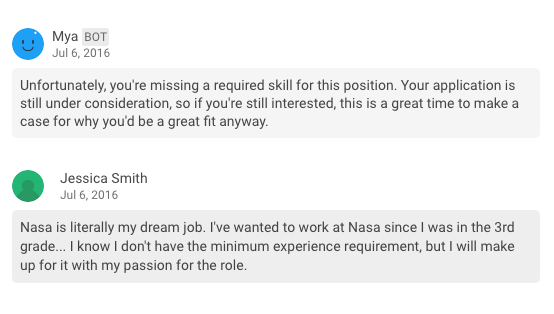 After Mya finishes asking questions and screening for qualifications, the bot will deliver updates to the applicant during the hiring process. Ultimately, a live person from the company will inform an applicant whether they move on to an interview.

The purpose of the bot, its creators said, is to give recruiters and hiring managers more time to focus on interviews and closing offers. 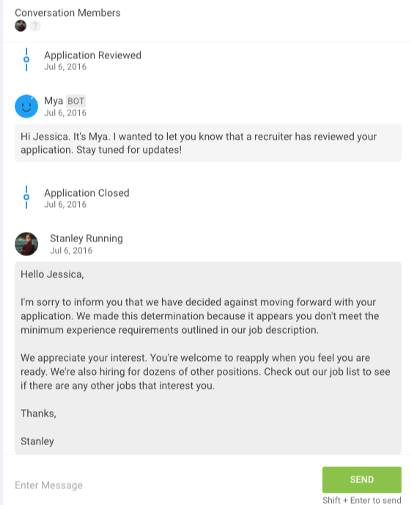 At the end of the application process, Mya ranks candidates top to bottom based on weighted factors like qualifications, recent activity, engagement, and other metrics.

FirstJob gives weight to the school a person attended but gives other factors more weight.

“There are other, much stronger predictors of performance, such as grittiness, passion projects, internship experience, interest/engagement, competency, etc,” a FirstJob spokesperson said.

Mya is not the first A.I. company in the enterprise space to combine artificial intelligence and natural language processing to automate the recruitment and hiring process.

Bots don’t just work for companies in the hiring process. There are also bots that work on behalf of the candidate.

EstherBot and personal assistant bots like MessinaBot are designed to tell anyone it speaks with more about a person’s interests and passions, as well as sharing their resume, and it will schedule a time to speak with them.

FirstJob raised $3 million in a November 2012 seed round. The company was created in 2011 and is based in San Francisco.