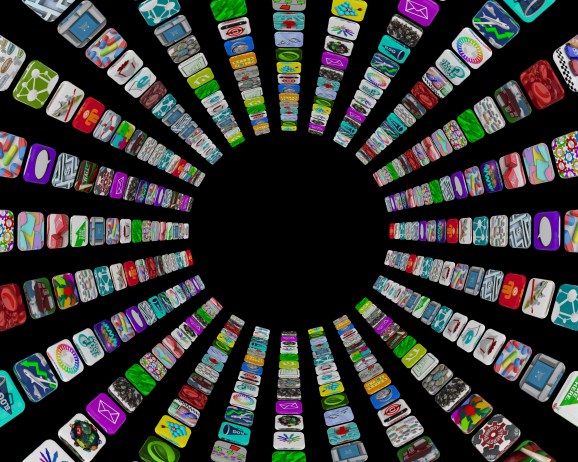 A lot of dominoes had to fall into place for mobility — and more specifically, mobile apps — to effectively take over the SaaS market. Of course, that’s “software as a service” — think Dropbox, Concur, Jira, Salesforce and many others.

First, there was the general rise in smartphone penetration across the world and into the enterprise, which then dovetailed into a very related decline in on-premise software that continues to this day. One need only compare SaaS’s growth rate with the spending trend for on-premise software. While SaaS applications enjoy an average 17.6 percent CAGR, on-premise software spending is suffering through a decline of -2.8 percent CAGR over the same 2013-2018 period, according to IDC.

Then there was the oft-remarked-upon “BYOD” (bring your own device”) trend that flooded enterprises with iPhones and Android devices, which further decreased reliance on on-premise software. BYOD users of SaaS mobile apps like Slack and Dropbox are constantly moving around, doing their work in a variety of locations. Perhaps it’s at the office, yet it’s just as likely to be in a coffee shop or traveling between locations on an Uber ride.

SaaS mobile apps are taking hold fast, as they benefit from a classical marketing “pull” environment. The “pull” is coming from enterprise employees who have downloaded useful SaaS mobile apps and are demonstrating the value to their CIOs. In many enterprises, this is happening even before the CIO has yet to approve any mobile app usage.

This underscores a huge advantage that SaaS mobile apps hold over SaaS delivered over mobile web browsers. Without a connection, your web-based SaaS is dead in the water, and BYOD users will abandon it and forever work around it. Yet, when they use a properly designed mobile app, they continue being productive at all times, even when they’re offline.

Unlike the original SaaS market, which was made up predominantly of applications focused on horizontal tasks that applied to any industry, vendors of SaaS mobile apps are succeeding with both industry-specific and horizontally-focused apps. A full one-third of mobile SaaS start-ups happen to be industry-specific, in sectors like healthcare, real estate, or construction.

A quick review of SaaS vendors’ product descriptions and customer reviews in the iOS App Store and Google Play Store reflects the popular use cases and benefits these apps provide. Among the most cited benefits by users is the ability to perform work “in the field”, as they rely on their SaaS mobile app to manage and perform tasks, communicate with individuals and groups, as well as rapidly retrieve and/or share content.

The overall SaaS mobile app market is expected to see strong growth for years to come. Yet nowhere is the current growth stronger than in productivity apps (i.e. Slack, Box, Dropbox etc.). Nearly all of the Top 20 productivity apps in the iOS App Store are SaaS apps, and these apps are riding a wave of investment – with Slack alone now valued at $3.8 billion, and having recently launched its own app investment fund.

The performance of SaaS mobile app companies around the globe seems nearly unstoppable. They are selling into a world in which 80 percent of employees are non-desk workers, 50 percent of APAC workers will have smartphones by 2020, and many important markets such as China, India, and Brazil are already characterized as “mobile-first.” Yet a key challenge remains that SaaS mobile app developers are finding important to address.

Next SaaS challenge: A laser focus on in-app performance

While product managers and developers can team up to solve any UI/UX challenges, outside help is needed to solve in-app performance problems such as sluggish load times, churn due to app timeouts and latency when navigating from screen to screen. Solving these problems is a crucial lever for success, as performance on-the-go and in-field productivity will make or break SaaS mobile app success. In the aforementioned “mobile-first” countries, as well as in the U.S. and Western Europe, app performance has a dramatic impact on user retention.

Retained users tend to recommend their apps to other users, and upgrade from free to premium versions of apps. In this way, robust app performance not only helps retain users, it also boosts SaaS mobile app revenue. With SaaS contracts generally being of short duration, and in many cases nonexistent, enterprise users have an exceptionally easy time dropping one app in favor of another. If an app is slow, users will delete it from their phones. However, if an app performs well and delivers robust functionality, a fast-growing base of satisfied end users will happily advocate for it in the app stores.

Additionally, reliance on the cloud and content delivery networks (CDNs) does little, as those infrastructures were designed for the legacy Internet of the 1990s, not for mobile app users. CDNs were designed to help speed websites, and as such, to accelerate TCP/IP with a reliance on web technology, not mobile-focused technology. With no mobile-first features, such as a mobile-specific communications protocol or mobile last mile acceleration features, CDN acceleration capabilities quickly dwindle and do virtually nothing for SaaS native apps. The high-speed transmission to the edge of the Internet suddenly slows to a crawl over the mobile last mile — which happens to be the most critical stage in the app delivery process, and the place where 70-90 percent of all latency occurs.

SaaS mobile apps that now move to investing in improved mobile app performance in 2016, delivered via simple purpose-built SDKs, will over time see steady increases in user retention, free-to-premium revenue growth and a higher volume of enterprise contracts. Expectations from users are always rising, but, alas, mobile networks aren’t dependable enough to consistently match these expectations, nor to to quickly process the many third-party calls embedded in today’s mobile apps.

It’s clear that for SaaS mobile apps to continue their seemingly inexorable rise, a turn to focus on back-end mobile infrastructure — the app’s “function”, as opposed to its “fashion” — will be warranted.

Jay Hinman is VP of Marketing at Neumob.