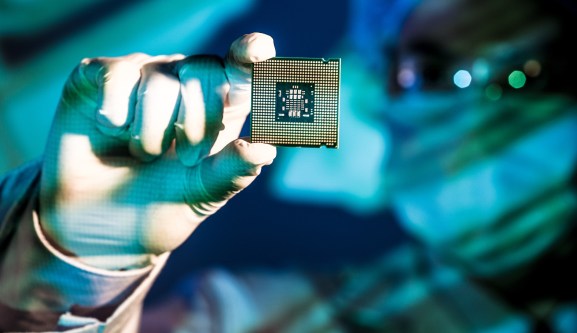 Cropped image of an engineer holding computer microchip on the foreground

This deal represents Softbank’s biggest acquisition since the $21.3 billion buyout of U.S. telecoms company Sprint, and the biggest-ever acquisition of a European tech company.

Founded out of Cambridge, U.K., in 1990, ARM powers the processors in most of the world’s smartphones, including iPhones, and with its low power-consumption and cost the company is also pushing hard into the burgeoning Internet of Things (IoT) industry.

ARM, originally called Advanced RISC Machines,before switching to its acronym in 1998, was a joint venture between Apple, VLSI Technology, and Acorn Computers, and was chosen by Apple for use in its Newton PDA device, which was a flop.

In the wake of Softbank’s acquisition, the Tokyo-based company said that it will maintain ARM’s Cambridge HQ, double its employee headcount in the U.K. over the next five years to six thousand, and retain its current partnership-based business model and senior management structure.

Masayoshi Son, chairman and CEO of SoftBank, said in a statement:

We have long admired ARM as a world-renowned and highly respected technology company that is by some distance the market-leader in its field. ARM will be an excellent strategic fit within the SoftBank group as we invest to capture the very significant opportunities provided by the “Internet of Things”.

This investment also marks our strong commitment to the U.K. and the competitive advantage provided by the deep pool of science and technology talent in Cambridge. As an integral part of the transaction, we intend to at least double the number of employees employed by ARM in the UK over the next five years.

SoftBank intends to invest in ARM, support its management team, accelerate its strategy and allow it to fully realise its potential beyond what is possible as a publicly listed company.  It is also intended that ARM will remain an independent business within SoftBank, and continue to be headquartered in Cambridge, U.K..

This is one of the most important acquisitions we have ever made, and I expect ARM to be a key pillar of SoftBank’s growth strategy going forward.

Today’s news comes less than a month after Softbank offloaded Clash of Clans-maker Supercell to Tencent for more than $10 billion.

Softbank’s ARM acquisition represents one of the biggest tech acquisitions of all time, after Dell’s $67 million buyout of EMC last year, and beats out Microsoft’s $26.2 billion acquisition of LinkedIn last month.

Though ARM’s board has approved the deal, its shareholders still have to give the green light — a 75 percent vote in favor of the scheme is required for the deal to proceed.

“It is the view of the board that this is a compelling offer for ARM Shareholders, which secures the delivery of future value today and in cash,” said ARM chairman Stuart Chamber. “The board of ARM is reassured that ARM will remain a very significant U.K. business and will continue to play a key role in the development of new technology. SoftBank has given assurances that it will invest considerably in the business, including doubling the U.K. headcount over the next five years and maintaining ARM’s unique culture and business model. ARM is an outstanding company with an exceptional track record of growth. The board believes that by accessing all the resources that SoftBank has to offer, ARM will be able to further accelerate the use of ARM-based technology wherever computing happens.”

Softbank’s investment in ARM is indicative of the value it sees in the Internet of Things, which is expected to see around two billion devices connected by 2020. We’re already seeing all manner of random connected products, including fridges, doorbells, and beds, and with ARM’s licensing model — which has led to it becoming used almost exclusively in the smartphone realm — Softbank is eyeing a future in which everything is powered by ARM’s technology.