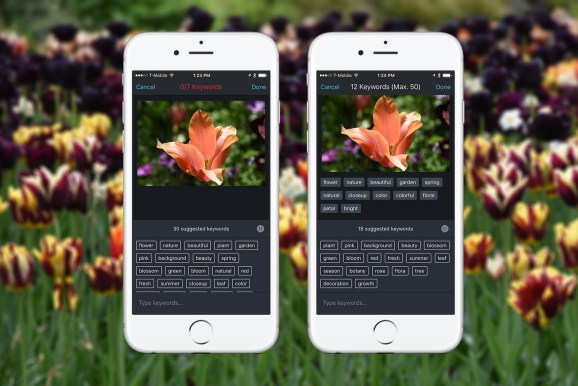 Shutterstock, a publicly traded company that provides premium stock images, music, and video content, today is announcing the launch of a feature that will speed up the process for contributors submitting new images through the iOS app dedicated for them. The app will suggest several keywords that contributors can tap on and select for the images they upload.

That way, people don’t have to peck out keywords with their fingers. The change has definitely saved time for Michael Petry, owner of mobile product at Shutterstock, in his tests of the new version.

“I would say generally it would take me probably a minute and a half or two minutes to add a photo and submit. Now I can do it in about 30 seconds,” Petry told VentureBeat in an interview.

While the update will improve user experience, it should also lead to more downloads of images. That’s important because Shutterstock contributors are paid based on the number of times their images are downloaded. And more downloads could make contributors want to stick around and contribute more, and better, images in the future.

Shutterstock does not have a warehouse full of people thinking of appropriate keywords for new uploads. It’s relying on a type of artificial intelligence called deep learning to recognize what’s contained in images and to figure out which words would be representative of them. Deep learning involves training artificial neural networks on lots of data, such as previously uploaded Shutterstock images, and then having them make inferences about new data. That’s what’s happening with the proprietary convolutional neural network that Shutterstock has developed internally.

Previously, Shutterstock has used this approach for the reverse image search it rolled out earlier this year, and deep learning is also behind the tool in the Shutterstock app that picks out visually similar images, Lawrence Lazare, product director for Shutterstock’s search and discovery team, told VentureBeat.

But in this case, Shutterstock in also factoring in the tags that lead to more downloads, Lazare said.

Shutterstock is not unique in calling on deep learning in the domain of image recognition. Apple, Baidu, Facebook, Google, and Microsoft, among others, have also done so.

A few years ago, though, “all the big companies came” to Shutterstock, Lazare said, because these companies had lots of data, specifically images, that can be useful to train on. Nowadays, Shutterstock has 93 million images to build up the understanding of its neural network for automatic keyword generation.

A blog post has more detail on the app update.