It’s fair to say that Slack hasn’t had all that much trouble coming up with cash, with over $540 million raised in the past few years, including a $200 million round at a $3.8 billion post-money valuation in April of this year. So what happens when a meteoric growth stage startup has more operating capital than it needs? You reallocate some money and start a fund — totaling $80 million — to foster and support your already impassioned developer community. And Slack has been busy doing just that, announcing 11 new portfolio companies today. This is the first the company has publicly revealed details of startups in the Slack fund. (More information is available at slack.com/fund.)

At the latest figures, Slack’s high valuation is based on the growth of its user base, both paid and free. We charted it below. 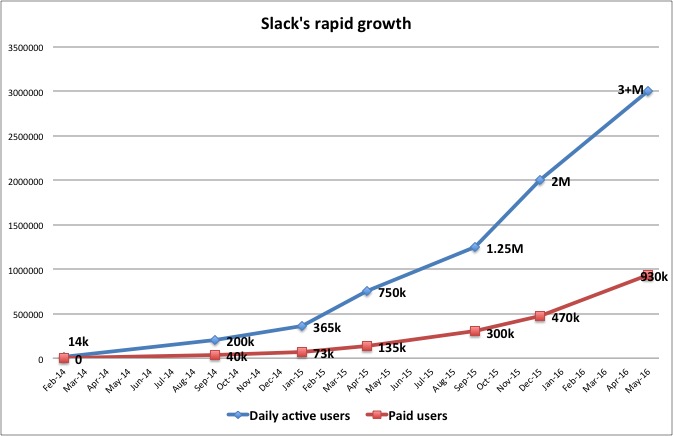 Above: Unofficial chart of daily active users and paid users based on Slack’s publicly disclosed figures.

Let’s do some simple math. Slack’s $3.8 billion valuation breaks down to about $1,250 per daily active user or a whopping $4,085 per paid user, given Slack’s latest figures. That there is a pricey chat app. Slack needs to close the gap between paid and free users to justify that valuation, and the types of services the Slack fund will hopefully create is clearly aimed at doing just that.

But Slack’s most passionate users will defend Slack by saying it offers far more than just workplace chat. The 600+ apps in the Slack App Directory offer credence to that claim — representing around 400 percent growth since its launch seven months ago.

In this light, Slack is sounding more and more like the enterprise “operating system” it promises it can be than the best way to share funny GIFs with coworkers.

This chatbot phenomenon the Silicon Valley echo chamber is hyperventilating over is getting to be a bit much, no? After all, most bot experiences I’ve tried, especially on consumer messaging apps, have left me a bit…

But the description of companies officially blessed by the Slack fund sound way more promising than a clunky talking WeatherBug thing — like bots that help you get your job done faster by automating repetitive tasks.

Take Butter.ai, for instance, a bot that promises to artfully help you find all your company files hidden away in various drives. Or Birdly and Sudo, both bots that radically cut down the need to log into the platforms salespeople love to hate (we still like you, Salesforce).

The fund is designed to back companies who are solving problems for professionals using the Slack platform. There isn’t a target number of investments, just steady bets on exciting teams building apps for Slack. This isn’t a new concept for software companies with a lot of users. Yammer and Jive did it in the mid-2000s (somewhat unsuccessfully). Salesforce is doing it now with a huge venture and M&A arm (leading the rounds of a number of inside sales tech startups, quietly or publicly). Box and Domo are trying it on a smaller scale. And most notably, Slack’s direct competitor Atlassian had huge success generating cash for and from its developer community when it launched a marketplace — hitting over $120 million in sales as of December.

A spokesperson at Slack wouldn’t give specifics about the number of pitches or timetable on when the company plans to deploy the remaining $78 million or so from its fund, but it did say they’re only focused on seed or series A rounds, helping young products get off the ground successfully.

If I were to approach this as a cynical analyst, I’d say it feels like Slack is getting the lion’s share of the value here, while the portfolio company’s upside will only go as far as Slack does. But the newly minted startups see it much differently. “We don’t see it as them getting all the value,” Jack Hirsch, CEO at Butter.ai, told me in an interview. “Imagine if Apple reached out to the best app makers and offered them exclusive support, access to their team … and money. Slack is going above and beyond for their ecosystem. My team at Butter.ai is beyond thrilled to work with them.”

Here are all the companies being announced:

Butter.ai is a bot that makes all of your company knowledge easily accessible. Butter is in private beta.

Growbot gives channels or groups the ability to immediately share team “kudos” or “props” to grow appreciation and recognition. Growbot is used by 2,000+ teams today.

Abacus is an intelligent expense reporting platform that uses data and behavior analysis to automate expense creation and approvals.

Automat is a platform to bridge human expertise and artificial intelligence to make it easier for anyone to build a conversational bot. Automat is in private beta.

Birdly is a bot connecting teams to Slack and Salesforce. Birdly helps your team stay up to date with latest Sales metrics, helping you build a transparent culture where everyone can access Salesforce information.

Candor helps people improve their relationships at work by facilitating caring but challenging personal feedback. Candor is in private beta.

Konsus is a service that gets you access to on-demand freelancer business support 24/7 via Slack.

Sudo is a bot that provides a natural language interface on top of a company’s CRM system. Sales reps can send a Slack message, call, text, or email Sudo after a meeting and Sudo takes care of data entry.

Howdy is a virtual digital coworker, automating repetitive tasks so you can do the real work. Howdy asks questions, collects the responses, and delivers a report back to you.

Small Wins created Bugbot, a bot to track and work on GitHub issues in Slack — and is working on a new productivity product in stealth, led by Ryan Block, former editor in chief of Engadget.

If you’re building a bot and interested in an investment from Slack, you can email the team at slackfund@slack.com.