The rise in usage of Facebook Messenger continues unabated, and today the app marks a major milestone: 1 billion monthly active users. Facebook hasn’t been shy about touting the benefits of its messaging service, especially as it extends to businesses and bots, so in honor of this occasion, the social networking company has revealed some growth statistics. 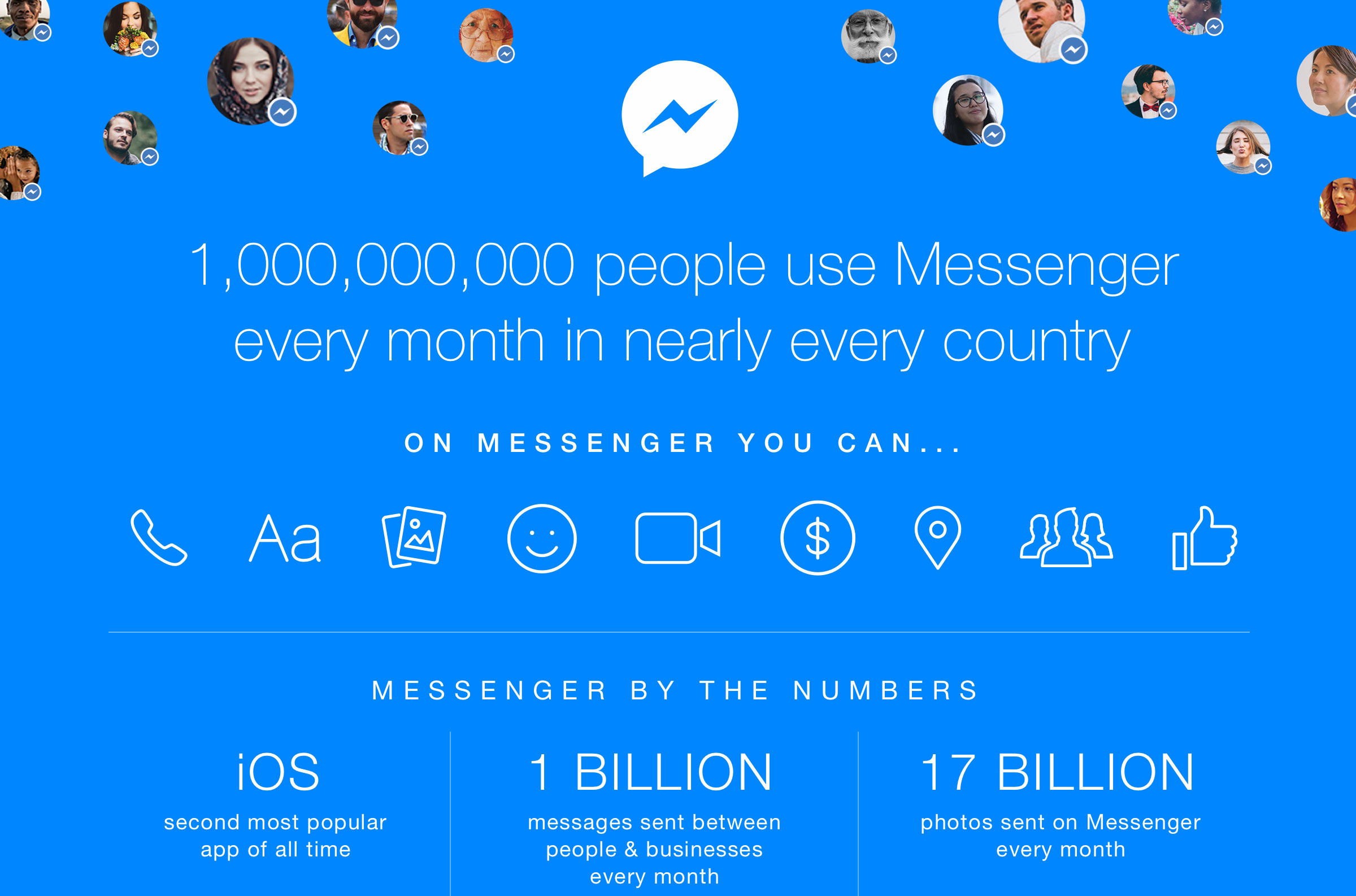 It’s apparent that people have come to grips with messaging services and are comfortable with Facebook’s offering, in fact, Messenger is considered the second most popular iOS app, behind Facebook’s main app, and its Android version has been downloaded more than 1 billion times.

People are also doing more with Messenger, including making phone calls to friends, colleagues, and loved ones. In fact, the company claims that 10 percent of all Voice over IP (VoIP) calls made globally take place within Messenger. Telephony service is something Facebook has been working on for a while, with peer-to-peer calling introduced in 2013 and group calling rolled out last April. The rather large percentage of people using Messenger for calls highlights the work Facebook has done with the technology, fulfilling a promise CEO Mark Zuckerberg made last year that the quality of calls would increase as more people used the service. 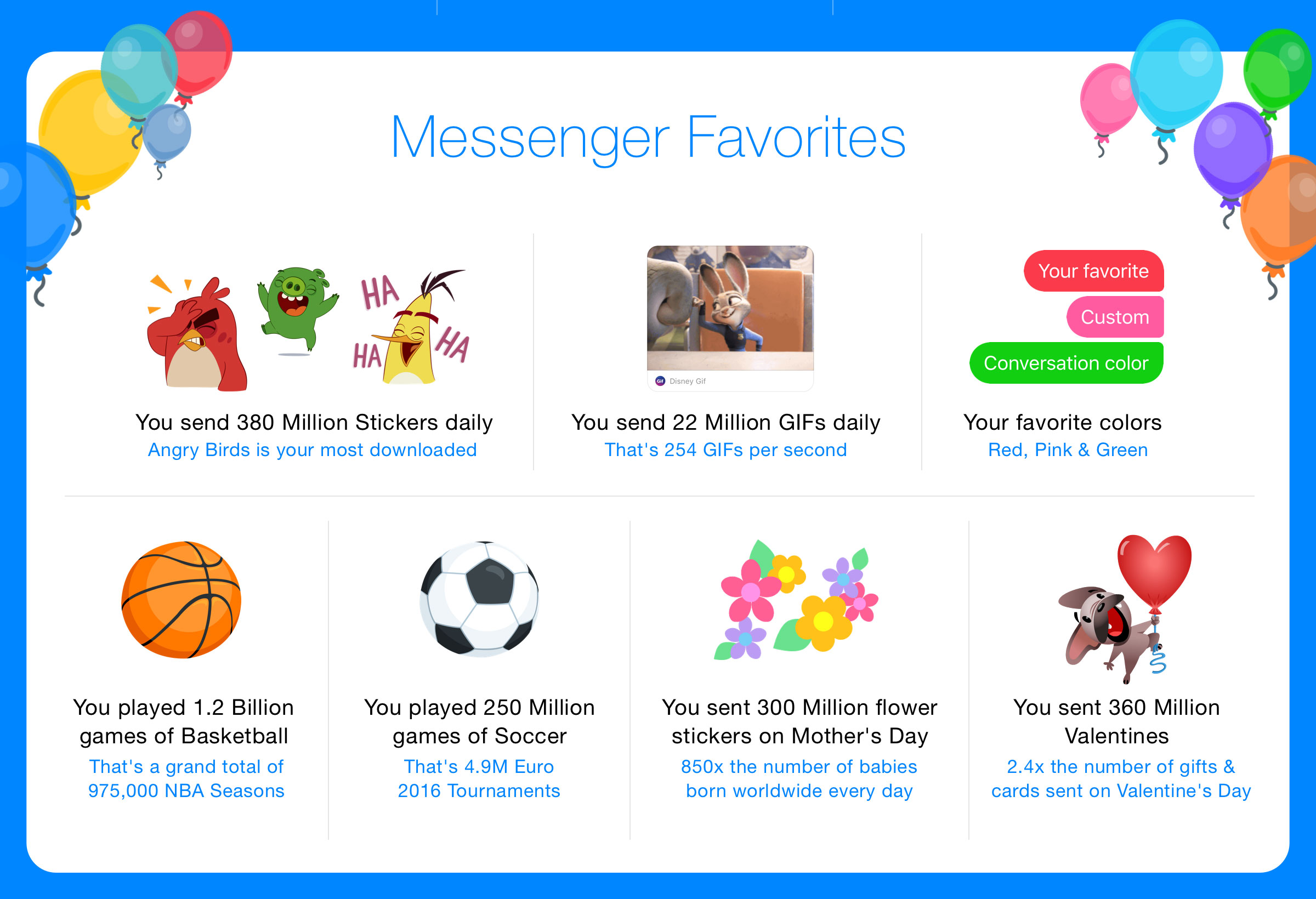 Beyond voice calling, people are more engaged within Messenger, regularly sending photos, stickers, and GIFs to each other. Facebook said that more than 17 billion photos are distributed by Messenger each month, with 22 million GIFs shared every day, the equivalent of 254 GIFs per second.

And let’s not forget about entertainment, since Facebook has been getting into the game space. In March, the company released a basketball game within Messenger that has since been played more than a billion times. Last month, it followed that success with a soccer game, just in time for the Euro 2016 tournament.

But beyond interpersonal communication, Messenger has seen its role evolve to facilitate interactions between people and businesses. At F8 in 2014, Facebook launched a platform around the app with the intention of encouraging merchants and companies to leverage the technology as a way to correspond with customers in the manner they’ve grown accustomed to. Today, more than 1 billion messages are sent each month between customers and businesses, a number that Facebook states has doubled in just the past year.

This figure will likely continue to grow as Messenger sees a proliferation of bots on its platform, something Facebook recently started supporting. Today, there are more than 18,000 bots launched in the app, a 63 percent increase from June, when Facebook claimed there were 11,000 bots on its platform. Developers are certainly showing interest in the potential of bots within Messenger — more than 23,000 have signed up to the company’s Wit.ai bot engine to leverage its natural language processing capabilities.

“As part of this journey to 1 billion, we focused on creating the best possible experiences in modern day communications,” said Facebook’s vice president for Messenger, David Marcus. “We remain focused on helping connect people to the people and businesses who matter most.”

To show its appreciation for the way people have embraced Messenger worldwide, Facebook said it’s adding a balloon gift in the app that you’ll be able to send to friends to add “a touch of whimsy and delight” to conversations.