Toward the end of 2014, comScore announced that the average number of apps most American smartphone users download per month had reached “zero.”

It was a “too good to be true” stat that sparked a slew of articles from the likes of Quartz, Business Insider, and Time. The citations continue today, with articles as recent as June 2016 parroting the “apps are dead” mantra.

But it was a statistic that didn’t seem wholly reasonable to me, just like many others that I’ve had the pleasure of debunking, such as the amazing sales touchpoint stats you used to see dotted around LinkedIn, or the number of CRM installs that fail.

Now, thanks to new data released in the opening keynote speech by Tune CEO Peter Hamilton at Postback 2016 in Seattle today — data based on a report authored by John Koetsier, a mobile economist at Tune — we can debunk this one too.

Importantly, Tune’s new report isn’t affected by Pokémon Go, although outliers like that ubiquitous smartphone game will have a positive effect on future research. The data included in this study is pre-Pikachu, so Niantic and Nintendo’s app doesn’t skew the results.

Of course, the articles that sprouted from that original study did have a grain of truth — growth within the most popular apps is in decline.

According to the report, Facebook Messenger is growing 18.4 percent slower than last year, YouTube’s app is seeing a 20.1 percent year-over-year drop in growth, and Google App’s growth rate declined by 30.6 percent. But that is to be expected. That is expected. It is easy to create triple-digit growth when you don’t have an audience to begin with. That said, while the most popular apps are seeing a slowing in terms of new users, Facebook Messenger still joined the “one billion club” this week.

“Messaging is huge, and bots are going to be big,” Koetsier told me. “Personal digital genies such as Siri, Cortana, Google, and Alexa are also going to occupy increasing roles in the future of mobile. But it’s important for mobile publishers, brands, and game studios to know what’s actually happening right now. Pokémon Go shows us just how viral apps can be, and how quickly an app can emerge from effectively nowhere to be a global phenomenon.”

Tune’s new study sheds light on the app economy, and the results pass the “gut check” for being more realistic and accurate.

In addition to measuring one month’s worth of app install data for 74 million smartphones and tablets owned by 48 million Americans, Tune surveyed 3,000 American smartphone owners to understand app install behavior.

The survey data shows that an average of 2.3 apps per person per month are downloaded to smartphone devices. Only 25 percent of the respondents failed to download an app during June 2016 — the surveyed month.

In fact, almost 20 percent of the respondents had downloaded four or more apps that month. 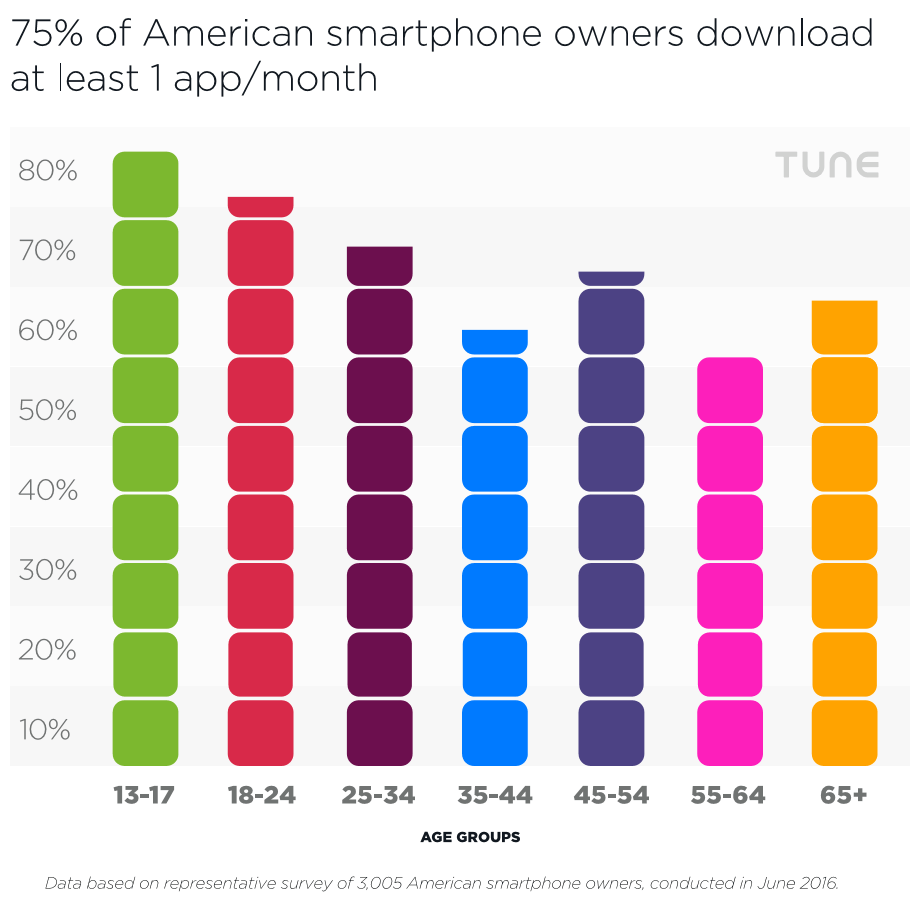 The report does include a number of caveats. The month chosen for the massive data set was September 2015. While that could have skewed the results somewhat, September isn’t a traditional “spike month,” and so it is likely to be fairly representative of the whole year. That said, the report attempts to balance out the results and comes to a realistic conclusion:

Looking at all the data, it seems that a reasonable — even conservative — level for the average number of app downloads by American smartphone owners is 1.5 per month.

The app ecosystem will continue to be challenged in the forthcoming months as we see conversational UI — in the form of chatbots, Google’s Assistant, Amazon’s Alexa, Apple’s Siri, Microsoft’s Cortana, and more — disrupt the two major app stores. That, honestly, is a good thing. We need to challenge the status quo on occasion to see if there’s a better way of doing things.

“I think Siri 2.0 will be a big eye-opener, but it’s still not the future personal assistant that we thought we were getting when Apple bought Siri in the first place,” Koetsier said. “There’s probably another year or so of development before Alexa, Cortana, Google, and Siri (plus other startup competitors) get to the point where we can task them with essential, but tedious, parts of our lives that currently — on mobile — take three to five apps. For example, booking a trip with tickets for a show, hotel, flights, and transportation to the hotel all in one fell swoop.”

But to say that apps are dead, and to parrot a two-year-old study that never sat well in the first place, is not healthy. There’s still a long way to go before the App Store and Google Play need to start quaking in their boots.

Tune’s full report is available from today on its website.