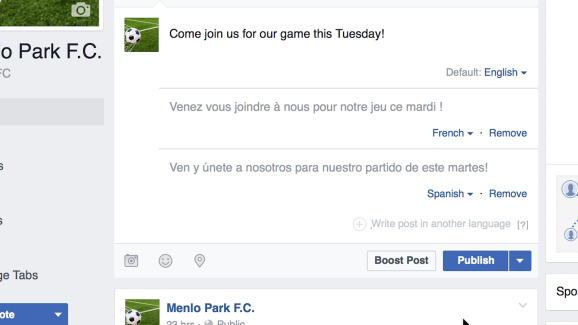 The chatbot marketplace is growing fast.

As Satya Nadella, the CEO of Microsoft, said at Microsoft’s World Partner Conference earlier this month, “Pretty much everyone today who’s building applications … will build bots as the new interface.”

Over the past year, we’ve seen a proliferation of bots, from news apps to scheduling assistants to integrations on top of Facebook Messenger or WhatsApp. It’s clear bots are here to stay.

The bots we hear about are primarily built and designed for the U.S. market or Asia, however. That’s unfortunate. If you don’t speak English, Chinese, Japanese, or Korean, you’ll be pretty disappointed with the bots you find on the market.

Most people expect these bots to spread to the rest of the world in the next few months, but, as any localization expert can tell you, it’s just not that easy. If spreading the proliferation or use of a bot was as easy as adding multilingual support, I could add multilingual support to a bot in dozens of languages in just five minutes using APIs from WolframAlpha, Bing, or IBM Watson.

Upgrading your bot to work in multiple languages and for multiple audiences requires the same iteration, patience, and cultural awareness necessary to grow a mobile app into an essential part of a user’s daily habits in a new country. We can learn a lot from the updates popular mobile apps have made over the past 10 years in order to grow into new markets overseas.

As you look to support languages and countries, here are a few questions to ask. These are the same questions app developers had when that market started to grow.

What input method do your users prefer?

Currently, chatbots are all the rage, but people in some cultures prefer speaking to typing. For example, in Brazil, WhatsApp saw a surge after adding voice memos because they resonated with the Brazilian culture.

What is the most appropriate response in a chat?

It’s important to tailor your response to your audience. For example, in most of the world, automated voices are female, but BMW famously had to change its GPS to a male voice due to complaints in the German market.

Do you need to disable, change, or add any features to grow into a new market?

Not all cultures want a new feature. Google Street View was heralded as a fantastic update in most American cities but faced major opposition when it tried to expand into Greece and Japan. Interestingly, in Japan, the company ultimately had to reshoot all its photos from a lower camera angle so that it wouldn’t infringe on private yards. To grow into the Indian market, Google had to build an entirely new way to give directions for Google Maps. Since names for streets and intersections were not reliably available, the team built a direction system based on landmarks and casual instructions.

How does your app work with poor service?

In the U.S., we’re blessed with fast and regularly available internet service. In most countries, however, internet connections are not as fast and not as regularly available. It is important to test your app in less-than-optimal situations, such as with a 2G connection, with minor packet loss. If possible, the app should also be built to fail gracefully, with partial offline support. A great example of an app that works under the most extreme circumstances is WhatsApp. In situations where chat apps such as Google Hangouts or Slack fail miserably, WhatsApp is able to navigate inconsistent internet coverage and enable users to continue to send and receive messages. That may be one reason the app is so widely popular.

As bots continue to gain popularity, they will only continue to proliferate in our everyday lives. In fact, Gartner predicted that by 2020, 85 percent of customer interactions will be managed without a human involved. When you’re ready to grow your bot into a new region, don’t think of the task as a translation project and an opportunity to add new jokes — think of it as a new feature or a total redesign.

Take a step back, analyze the core traits that have made your bots most successful, and bring that experience to the new version of your bot.