It’s called the “makeup counter panic,” and we’ve all experienced it. At least, those of us who wear makeup. I’m at the store, trying to find a new foundation or shade of lipstick, but I have no idea what to go with. The tester samples look gross, and not one counter person is in sight. Do I steal a sample from an actual container, trust the color on the label, and hope for the best? It can be a mess.

Luckily, makeup has a new weapon in the fight against makeup counter panic: augmented reality.

Tech developers are teaming up with makeup, hair, and skincare companies to create augmented reality beauty simulators. Creative agency Holition recently paired up with Rimmel London to create an app, set to come out this September, where customers can test out makeup they can then purchase through the app. Mary Kay has a makeover app, and you can find independent apps like YouCam Makeup and ChouChou: Virtual Hair Makeover.

Makeup tech developer ModiFace has made apps for Urban Decay, L’Oréal, Avon Beauty, and other companies. Jennifer Tidy, ModiFace’s vice president of partnerships, said it gives makeup wearers the ultimate tool in “try before you buy.”

“Having the option to explore and try on an orange lipstick or a purple hair color really stretches the boundaries,” Tidy said. “[You can] have some fun with it without being horrified with the results.” 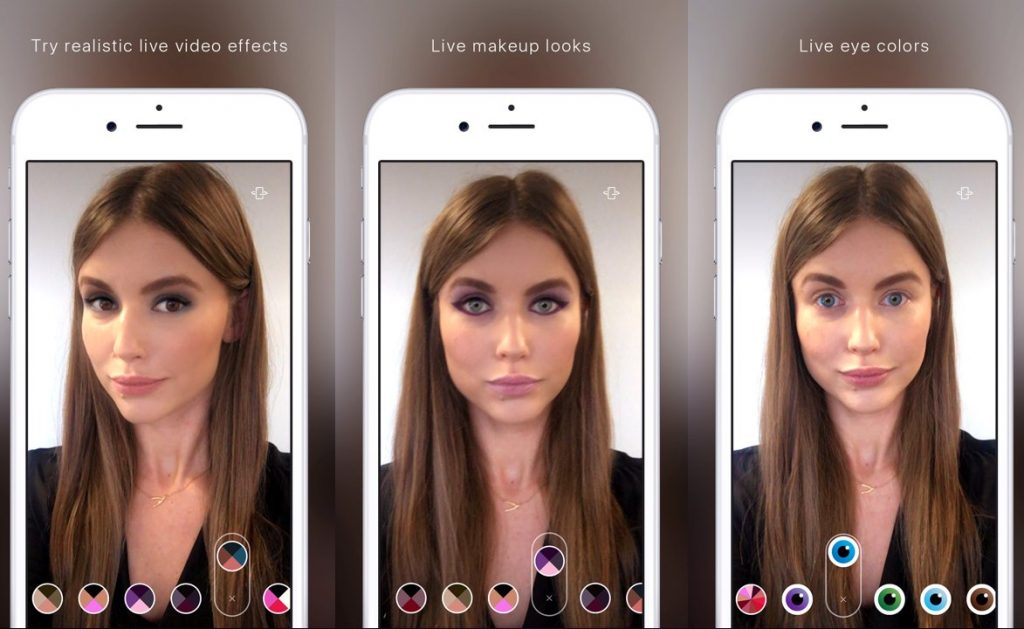 Above: How ModiFace’s live effects work.

Tidy said augmented reality makeovers are great for people who buy their makeup or hair products online, or if they’re shy about getting professional consultations in person. ModiFace mostly licenses its product to outside makeup companies, but it also has several apps of its own for trying on things like makeup, hair and cosmetic surgery procedures. They have in-app purchases like more contact lens colors or celebrity hairstyles, but Tidy said the apps are more like product testers, showing beauty companies the type of work that they can do.

Makeup technology first came around in the late ’90s with Cosmopolitan Virtual Makeover CD-ROM, which The New York Times hailed as “part of a growing way of interactive computer applications directed at women.” The CD-ROM, which I owned as a teenager and used on a regular basis, let users upload a photo of themselves and create different “looks” from the safety of their computer. It was fun but rudimentary, definitely encouraging more outlandish, garish looks than realistic makeovers.

“Everything,” she laughed. “That Cosmopolitan CD you can put into your computer and upload is a bit of a dinosaur, but it was the original. The technology now has a level of accuracy that makes showcasing the products in a realistic way easier. We’re light years ahead compared to where we started in 1999.” 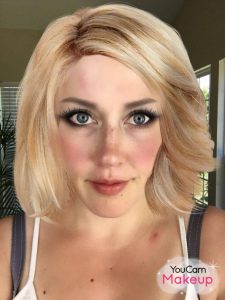 Above: YouCam can add hair and makeup to your face for an AR makeover.

Computer programs like Virtual Makeover required users to visibly trace their eyes, lips, and eyebrows, which mostly yielded troublesome results, but augmented reality apps like ModiFace use assisted tracking to shape those difficult areas. After a user takes or uploads a picture, ModiFace has them move targeted points around to frame where the eyes and lips are, as well as hair if you’re adding a new color to your existing style. Other apps like YouCam don’t even require you to make adjustments; it will automatically map your face and put the makeup on. It’s not as precise as others like ModiFace, but it still works well.

Having tried some of the latest makeup and hair apps, I was impressed. Augmented reality has taken makeover technology to the next level. I tried out a couple of looks and sometimes couldn’t tell what was real and what was digitally added. I was especially surprised to learn I could pull off mauve lipstick. Tidy herself said she discovered a new look thanks to the technology.

“I tried some hairstyles and I realized I looked good in bangs, which I wouldn’t thought of before,” Tidy said.

Even with all the advancements, the technology isn’t perfect. It absolutely depends on good positioning and lighting. When you use a bad photo, it’s easy to see the makeup as just being piled onto the face. Tidy recommended taking the photo in a well-lit area without a lot of shade or wind, ideally indoors.

“The thing with this type of technology is really, the type of photo you upload it does impact,” Tidy said. “If you’re in a shadow or your hair is covering up your face, there’s only so much compensation we can do to help that.”

The hairstyles also tend to fall short of the Uncanny Valley. While hair colors are surprisingly easy to integrate into your natural hue, as well as contact lenses, hairstyles end up feeling a bit layered on. ChouChou works all right, with cute hairstyles from Tokyo, but it still falls short of looking like your actual hair. It’s more a prototype than something to fool the neighbors. Even though the hairstyles don’t look the most realistic, the app did help me discover my inner Khaleesi.

Several of these apps don’t offer many, if any, options for men. A few have men’s hairstyles, but they definitely have less than those that focus on female beauty. And I couldn’t find any apps where the makeup or cosmetic surgery sections had comprehensive male options. That’s something companies should definitely take note of and improve in the future.

But the technology is constantly changing, and new features are being added all the time. Tidy said ModiFace’s newest venture was Live Video, where makeovers can be shown in real-time on the face with adjustable mapping. ModiFace’s Urban Decay app uses Live Video for trying on new lipstick shades, shown a few paragraphs above. Other apps like YouCam include tutorials for how to achieve the different looks, including costume makeup like “Queen Cleopatra.” We’re also seeing better brand integration and purchasing options, like with the upcoming Rimmel London Get the Look app. Tidy said it’s all about giving people a way to experiment with their look, and possibly discover something new about themselves in the process.

“You’re not committed to having to purchase something without trying it on first,” Tidy said. “You can explore every single color of lipstick or eyeshadow or eyeliner, with that zero commitment factor. It’s an entertaining way of exploring the brands.”