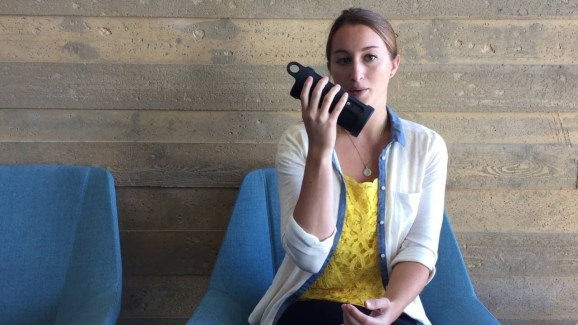 A Next IT employee speaks into an Amazon Screenshot. Credit: Next IT

Some of the biggest names in air travel and health care, as well as the U.S. government, may soon bring their virtual assistants to Facebook, Amazon’s Alexa, and Twilio, as Next IT announced today that bots created with its Alme platform can now join the popular chat app platforms.

Next IT is by no means a newcomer to chatbots. The Spokane, Washington-based company that specializes in virtual assistants for large businesses and governments was created in 2003, and some of its artificial intelligence-enabled bots have been active on clients’ websites for more than a decade.

Sgt. Star, for example, a virtual assistant that has answered millions of questions posed by U.S. Army recruits, has been active since 2006.

Approximately two dozen virtual assistants have been built using the Alme platform, the company said, including:

Merrill Lynch and WebMD have also created chatbots using the Alme platform, a Next IT representative said.

Next IT plans to extend the Alme platform to more voice and text chat platforms soon.

“In this world now where there’s this big storm about being able to provide conversational interface and conversational dialogue through all these different channels, we can very quickly repurpose that,” Rick Collins, president of enterprise at Next IT told VentureBeat.

Though Next IT has more than a decade head start on those who’ve just entered the chatbot space in recent months, the company waited until now to allow integration with popular chat apps.

Next IT has been speaking to Alme platform users since February about allowing their assistants to join popular chat app platforms, said Next IT Vice President Jennifer Snell.

“Although we were ready and able to showcase, we really wanted to test it out with some of our clients to see how they thought of it, if they had an appetite for it, and some of them actually are a bit concerned about even going in that direction,” she said. “We wanted to make sure enterprise had the chance to process information and not just think let’s throw a bot at everything and it’s going to work because bots are quickly becoming the new apps and we’re going to have a lot of bots out there.”

Another reason for the delay: Until now, some Next IT clients have utilized Facebook for human-to-human interaction with customers instead of bots, Collins said.

NextIT believes years of experience have given the company several advantages, Collins said, like how to distinguish between questions in a conversation.

Next IT personal assistants have the ability to share images in chat but have primarily been made for text interaction. In sync with the evolution of platforms like Facebook Messenger, buttons and more media may be incorporated into Next IT-made virtual assistants in the future.

“We still think the conversation itself is really important,” Collins said, but added that “my view is we would implement buttons later in the process where you’re down to and very clearly understand what the options for action or outcome might be, and then you use it to simplify that.”

VentureBeat attempted to reach Alaska Airlines, Aetna, and the other aforementioned companies for comment but haven’t received a response. We’ll update here, if we do.

Update 8:30 a.m. July 25, 2016: The U.S. Army contacted VentureBeat shortly after this story was filed to state “At this time, we are not working to include Sgt. Star on any other platforms besides goarmy.com.”