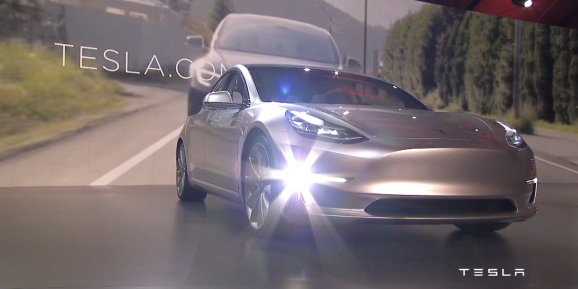 Elon Musk, cofounder and CEO of Tesla Motors, today elaborated on his vision for the shared fleet of autonomous Tesla vehicles during a speech marking the grand opening of Tesla’s Gigafactory battery manufacturing plant in Nevada.

The remarks came a week after Musk unveiled his plan to turn existing Teslas into a “shared fleet,” with the help of distributed learning of autonomous driving.

Here’s what he said:

Whenever you’re not using your car, you’ll be able to just tap the Tesla app on your phone and then add it to or subtract it from the the shared fleet. And you’ll be able to define, like, well, you know, who can use it, like only five-star users, or anyone, or only family, or whatever. And then whenever you want it back, you can just tap it, and it will return to you. So most of the time when you look at cars, they’re sitting in a parking lot somewhere, and they’re not being used, and this has the potential to massively amplify the utility of vehicles and offset the cost of ownership. And it’s going to be totally up to you when you want to do it, or not do it. It’s all yours.

“Will it find Pokémon for us?” someone in the crowd asked.

“It will find Pokémon for you, Musk said. “Absolutely. Of course.”

Last month, Tesla said the National Highway Traffic Safety Administration was investigating the accident in which one person died while driving in a 2015 Tesla Model S that was in autopilot mode.

You can watch a recording of today’s Gigafactory event below.