Pokémon Go has captured our collective imagination. It also looks to have captured a big chunk of our free time — time that Facebook and Netflix used to own.

It is absolutely insane how much of a stranglehold these two juggernauts have had on our free time — which makes it all the more incredible to see how a small app like Pokémon Go can grab so much of it away from them in such a short amount of time.

Let’s dive into the statistics.

Netflix has become the goliath of entertainment. In April it was reported that Netflix has over 81 million paying subscribers worldwide, just over half of which are in the U.S.

The last time Netflix reported on actual time usage was in its review of 2015, in which it said users spent 42.5 billion hours watching shows on its service. If you average that out by subscribers at that time, that is 1 hour, 33 minutes per day of streaming. This doesn’t account for shared Netflix accounts, but it’s still a staggering amount. That’s 10 hours and 21 minutes a week, or about 1 and a quarter workdays.

Needless to say, Netflix has almost reached the point where it’s as much a part of the daily routine as eating supper.

Facebook is a different animal altogether. It’s easily the biggest of the three in comparison, but that doesn’t mean users average more total time on the service.

First of all, Facebook accounts tower over Netflix and Pokémon Go significantly. With over 1.65 billion active Facebook users, nothing else even comes close. Another staggering aspect to this is that 54% of all those users only access it on mobile.

However, when you look at the average use per day, Netflix has the advantage. Globally, people spend just over 50 minutes a day on Facebook’s suite of apps, which includes Facebook, Instagram, and Messenger. So for a week, that’s 5 hours, 50 minutes, or close to three-quarters of a full day’s work.

Now Pokémon Go has been live for less than a month, so the numbers are certainly not quite to the level of Netflix and Facebook yet. But they’re still impressive.

So far, Pokémon Go’s peak day saw a total of 25 million users. On an average day there are around 20 million users. With the launch of the game in Japan and other countries, we’ll have to see how these numbers inflate. It has been reported that Niantic wants to bring the game to 200 markets around the world, which will definitely see massive increases in daily users.

The average usage amount is the really important part. According to this Forbes article, a new report gathered from 7Park Data shows that Pokémon Go users spend an average of 75 minutes a day on the app. In contrast, the Facebook app is only getting around 35 minutes per day. That’s 8 hours, 45 minutes a week, or about one full workday, with some change.

Having studied economics in college, I think of this time exchange in terms of opportunity cost. What could be done with a resource if you didn’t spend it on something else? In this case, what would people be doing with their time if they didn’t choose to spend it on Pokémon Go? My guess is that a surprising number of Pokémon Masters would say they would be spending that time watching Netflix or browsing Facebook. But is it enough to really cause a dent in their market share of free time?

Android reports that in Canada, a country that has had the game for even less time than the US, nearly 30% of Pokémon Go users were skipping their day-to-day activities to catch Pokémon. These activities would include anything from school to work to sleep to (you guessed it) Netflix and Facebook.

In an attempt to get a good feel for this, I decided to run my own survey that contains two questions:

I had everyone I know share it on social media and also put some promotion budget behind it, just until I got a semi-decent data set of a hundred responses. 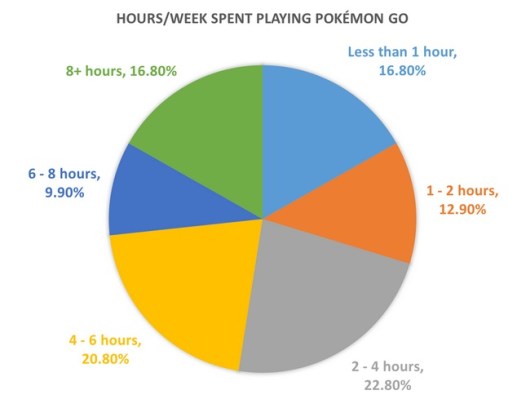 If you would like to see the survey, and the live results, feel free to respond to it here.

As you can see, the average time spent in my data set was a bit smaller than what was reported in the 7Park Data report, but not by much. I cut my responses off at 8+ hours, as I was comparing that to spending a full workday out catching Pokémon. However, there were still 47.5% of users who spent at least 4 hours a week playing.

Then the interesting part: 65% of these players would have spent their time watching Netflix, and 53.5% of Pokémon trainers would have been browsing their Facebook newsfeeds for at least part of that time. Those are HUGE percentages!

If we take those same percentages and apply them to the Pokémon Go user base as a whole, that means 65% and 53.5%, respectively, of 20 million people are skipping at least part of their usual Netflix and Facebook time to play Pokémon Go every day.

So yes, Pokémon Go is daring to do battle with the big players. What remains to be seen is if it can keep up the momentum, especially as it launches the game to the rest of the world. How will this impact Netflix and Facebook in the long run? We’ll have to see.

Who has the advantage?

Clearly, the established champions have an overall advantage. Pokémon Go has its work cut out for it to really remain any sort of challenge in the long run against the media giants. But each party has at least one major advantage.

Netflix’s advantage lies in how interesting it continues to be to its users. A ton of that interest stems from dozens of original and highly entertaining projects that are constantly being released. And this content-generating engine is only getting started. You can find the list of new and returning shows for 2016 here. But the company is also spending a budget of $6 billion on original content this year, much of which will come to fruition in 2017.

This massive and constant injection of new and exciting shows will only continue to intrigue viewers, and will continue to spark interest for a long time after Pokémon Go completes its global launch. It also continues to have an advantage over Facebook on that front, as Facebook can only be as interesting as its users make it.

In this way, Netflix is really it’s own biggest competitor. If it continues to put out some of the best entertainment anywhere, it wins. If it starts producing less-interesting or inconsistent shows, it could really shoot itself in the foot.

Facebook and Pokémon Go have similar positives, with Facebook’s just being more entrenched and proven. Both have enormous social impact, bringing people together in ways that hadn’t been possible before. Both also have a huge advertising bonus. Facebook’s ads are definitely much more custom and targeted, but you better believe Google will find a way to make that happen in Pokémon Go as well.

The beauty of Facebook is how passively it exists in everyday life. It can be used between appointments, with a quick check during a work break, or even just at a glance as you’re walking with your mobile device. This is a passiveness that doesn’t exist nearly as well with either Netflix or Pokémon Go, which require considerable more attention and effort. Because of how easy it is to use, EVERYONE uses it.

Pokémon Go has a few major advantages. One of these is that it gets people out and about, which is something that millions of people have always made resolutions to do but never had the motivation to actually follow through on. Another is that it’s something that can be worked at and provides a sense of accomplishment, which is another huge motivating factor. However, both of these advantages have their limits.

Pokémon Go’s biggest advantage is that it’s on the cutting edge — and is just getting started. Its new (albeit basic) augmented reality component is fresh and exciting, leaving everyone to wonder what’s next. Pokémon Go is in a position to continue to make big waves and push the boundaries of what’s possible in video games and in augmented reality in general. Backed by a brand that has continued to add to itself over the years, there is still a lot of Pokémon material to go through, and the game continues to expand into new markets. This growth and innovation won’t stop for quite awhile and might be the foundation upon which tons of other opportunities emerge.

I don’t think Pokémon Go as it is now will continue to make as big a splash as it has, but Niantic could take it anywhere from here. Netflix and Facebook have mostly already created their identity, and their direction is clear. What Niantic and Google do with Pokémon Go, its technology, and the hype around it will determine the mark it makes on everyday life, and whether it will continue to control so much user time.

However this plays out, it’s been pretty cool to watch as a small, glitchy app takes the attention away from giants like Netflix and Facebook.