The dark theme should be particularly welcome to those who use their devices late into the night and really don’t need any more bright light shining in their eyes than necessary. 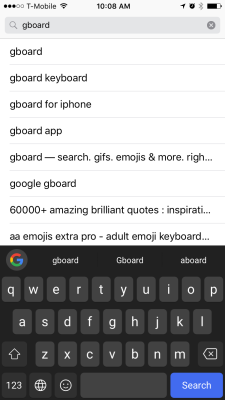 But also, Google is now letting users create customize backgrounds in Gboard. Once you’ve selected a photo from your camera roll, you can adjust the percentage of black overlay for the photo, and then choose whether you want to use key borders. Google brought similar functionality to its default Google Keyboard for Android last month.

One difference between Gboard and Google Keyboard for Android, though, is that you can create as many customized background keyboards as you want. And then you can delete the ones you don’t want anymore.

This is the first substantial update to Gboard since Google introduced it in May. Unlike the default iOS keyboard, this one contains integrated Google web search and GIF search, and you can swipe from key to key to spell out words, rather than peck on individual keys, which may be more time-consuming for some people.

Google has been providing dark themes in more and more of its apps, including Google Maps, YouTube Music, and YouTube Gaming. Meanwhile, Apple has added a default dark theme to its Clock app in iOS 10.