At this writing, Pokémon Go has been downloaded 75 million times worldwide and had broken records on Apple’s App Store and Google Play.

It’s safe to say that with Pokémon Go, augmented reality (AR) has gone mainstream. For those who follow the technology, this has been a long time coming. Blippar, an AR app, has been on the market since 2011. Yelp tried to push AR with its Monocle feature in 2014. And of course, there was Google Glass’s well-publicized failure. All carried potential, but none really took hold of people’s imaginations.

Pokémon Go’s success shows that AR wasn’t merely a fever dream among software engineers. It turns out that people really are ready for AR, if presented the right way.

The ability to code information layers into real, physical environments has applications well beyond the world of gaming. Augmented reality could help you identify your car in a sea of others in a parking lot. Hold up your phone and you might be able to see your Uber car on approach. While remodeling or decorating your home, you could visualize different materials or interior designs and see them overlaid onto your current patterns. Dating apps could benefit, letting you spot a current match on the other side of a bar. And, of course, AR could blanket the world in advertising, turning every surface into a potential billboard. 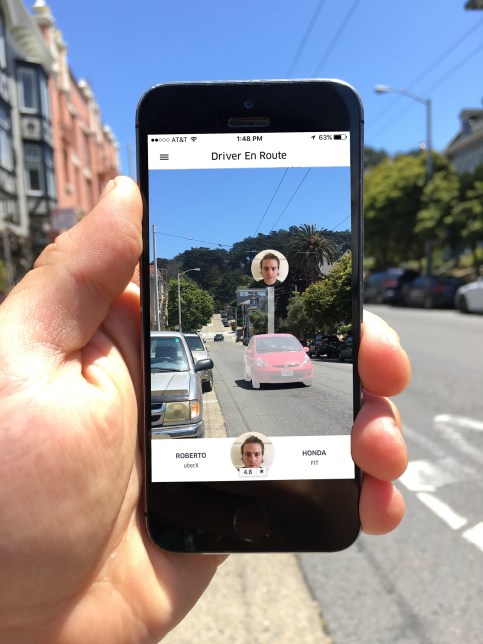 Above: AR could show you details of your Uber car on its arrival.

Most exciting are perhaps the types of educational applications that AR could make possible. It could bring history to life. Imagine visiting the Coliseum or the Parthenon in it’s full glory. Content and concepts can be unlocked in visual ways for all types of learners.

Unfortunately, those types of applications are still a ways off. That’s because effective AR depends on precision in location-based technology that the technology itself doesn’t yet support.

A 2014 study by the Mobile Marketing Association, which tracks location data accuracy to improve ad performance, found that only ⅓ of location-based ad requests were accurate to within 50-100 meters of the stated location. Up to 60% of ad requests contain some form of location data. Of these requests, less than ⅓ are accurate to within 50-100 meters of the stated location. And while the volume of location data is rapidly increasing, its accuracy is actually declining, according to research from Thinknear by Telenav, which specializes in location-targeted advertising.

Pokémon Go uses your smartphone’s position to interact with static locations on a static map. And for now, that’s where AR is kind of stuck — using your phone’s approximate location to trigger an experience within a static 100 meter field of interactive space. Achieving greater detail — or even further, interacting between two moving objects — requires a level of location data accuracy that isn’t available to marketers, developers, or businesses.

AR has a bright future in the lives of everyday mobile apps, and Pokémon Go has made great strides in consumer awareness and adoption. But the future of AR is very much tied to the accuracy of location data, and no rapid influx of venture capital or sudden rush of consumer interest can advance that on its own.

Improvements to location accuracy will come from a variety of simultaneous developments. Uber, for one, is investing in better mapping, which could improve the landscape considerably. But other advancements will also help: greater Wi-Fi availability, innovations in sensor hardware, improved broadband speeds, modifications to operating systems that make it easier for developers to use location data, and developers continuing to evolve best practices for how to use it. It’s hard to pin down one factor that can lead the rest.

One thing is for sure, though: It will get better. And when it does, augmented reality will finally enjoy the renaissance that Pokémon Go has foreshadowed.