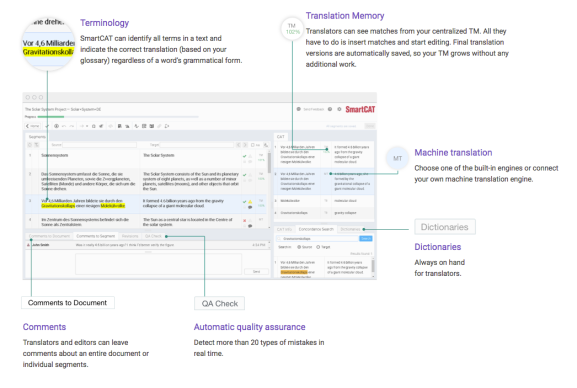 SmartCAT, developer of a cloud platform for translation automation, has spun off from Abbyy, the large Russian software publisher that had developed the project so far. The startup has secured $2.8 million from RedSeed — a Russian fund launched last year — to support its international development and has established its headquarters in Milpitas, California.

The project started in early 2013 with financing from Abbyy and SmartCAT founders — who together injected some $6 million into the startup, the Abbyy press service told East-West Digital News.

Skolkovo, the international tech hub under completion on the outskirts of Moscow, also supported the project in its early stage funding.

“We started developing SmartCAT as an in-house Abbyy project to provide Abbyy LS with a tool to automate translation management and to quickly scale a team to perform various projects,” explained Ivan Smolnikov, SmartCAT founder and former CEO of Abbyy Language Solutions (Abbyy LS), in an interview with the Russian media.

“At the very beginning, it was decided that the platform would be applied to solve not only our in-house tasks, but to serve the needs of the rest of the market players, namely translators, translation agencies, and customer companies. In 2015, the beta-version of the product started attracting an ever-growing audience to eventually reach dozens of thousands of translators and some 1,000 companies from 100 countries by the end of the year. Therefore, we decided to launch SmartCAT as an independent company to grow internationally,” Smolnikov said.

Supporting 70 languages and enabling access to 60,000 professional translators and editors, SmartCAT allows its users to translate “twice as fast” and increase quality “by 30 percent and more.”

Every month, users translate around 100 million words on the platform. SmartCAT covers financial workflows, acting as a hub between end customers and the vendors and freelancers engaged in a project, in exchange for a 10 percent commission fee.

RedSeed was founded by Ilya Shirokov, a prominent internet entrepreneur and former DST executive, to invest in internet companies in Russia and neighboring countries. Among the fund’s other portfolio companies is Profi.ru, a Russian-language freelancer marketplace.