This week we look at bots to automate activism, gamify task reminders, connect with people near you on Facebook Messenger, and more. 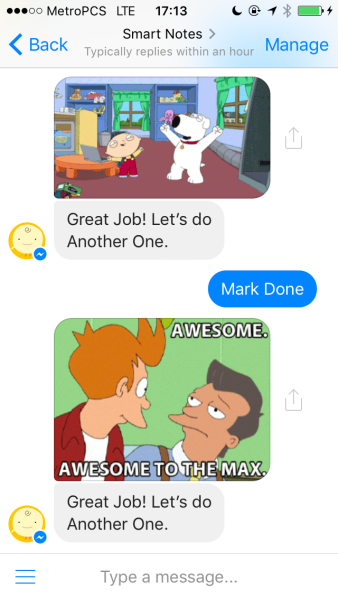 A big part of watching the proliferation of bots occur is watching bot creators remake the App Store. Smart Notes, which helps record notes and To Do list items, might be one example of a function that works better as a bot.

Each fulfilled task comes with a GIF celebration. As minor as that may seem, I’d do pretty much anything for a solid GIF, and the surprise of a new GIF after you complete a task can feel like the gamification of your To Do list. Done right, this seems like a great reinforcement mechanism.

Problems encountered while using Smart Notes: There’s only five or six GIFs so far, so the surprise doesn’t last very long. Also, a task reminder as simple as “Aug. 31 at 5 p.m.” was misunderstood, so maybe this one isn’t as far along as you’d hope. Smart Notes is new, it’s absolutely no Todo or Wunderlist, but the concept seems sound, and it’s going to be fun watching Smart Notes evolve the visual reward you receive after the completion of a task.

On Twitter, Stay Woke bot is the brainchild of Black Lives Matter activist Deray McKesson and tech co-op Free Train. The bot was first introduced last summer but came back into the news last week after reports of its new role advocating for gun control.

Stay Woke bot periodically sends words of encouragement, followed by the name of an African-American celebrity known for their talents or strength — names like Beyoncé, 2Pac, Fetty Wapp, and Stephen Curry.

@Liamtrty0 You are fueled by family to relentlessly pursue your dream, you embody Stephen Curry and we're honored to be on your team.

Send Stay Woke your state name and it will reply with a tweet that includes the name of U.S. senators and simple instructions on how to take action for gun control, as demonstrated by this Real Future article. At the time this story was published, Stay Woke bot did not reply with a tweet.

Stay Woke bot was Feel Train’s first project, one its creators admit can fall short. The bot wants to reduce the amount of repetitive, time-consuming tasks activists have to deal with. While the ambition to automate activism is honorable, it seems like the sort of project that could be a lot more interesting with a human-bot combination than with a bot alone. Stay Woke is available to download and customize on GitHub for any cause. 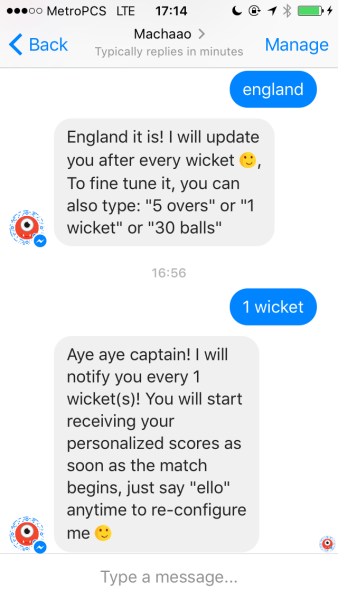 I may be unable to name a single professional cricket team but I know that cricket is consistently ranked among the most popular sports on the planet and that games can last for days. That’s probably why the bot has more than 100,000 users.

In the contest of bots versus apps, asynchronous push notifications are excellent for updates and scores. Machaao can be customized to follow scores, your favorite team, a schedule, and major changes based on your preferences. The bot’s makers want to add cricket trivia in the future. 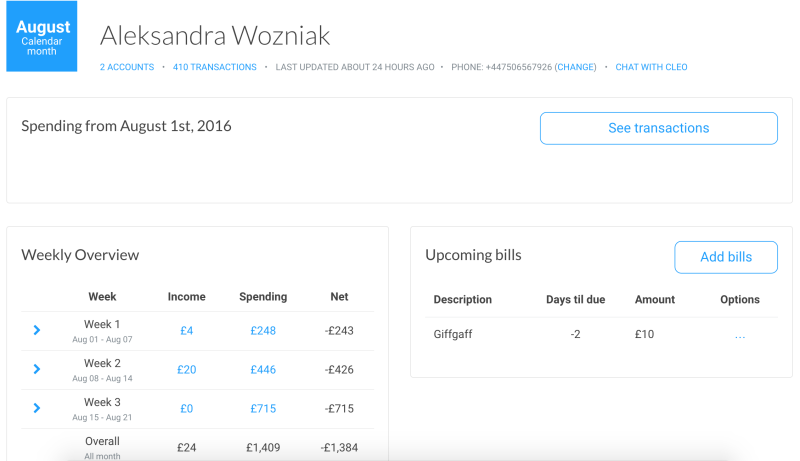 Above: Screenshot of the Cleo dashboard.

Based in London,  financial assistant Cleo joins a field of personal assistants that want to help you manage your personal finances. Different from some of the other bots in this space, Cleo has an online dashboard that tracks upcoming bills, week-by-week spending, and a breakdown of spending based on category. Seems pretty simple. “Simple” might be a bad word in other businesses but its nearly always a good thing with bots.

This bot is invite-only today. Go to meetcleo.com for an invite. 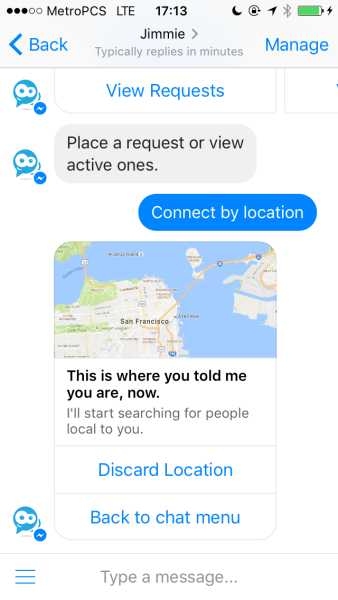 There are a fair number of bots that can either connect anonymous users anywhere in the world or help people who need advice or empathy. But since Messenger makes no effort to connect users in chat rooms, there’s probably room for more bots that do this. Friends, please meet Jimmie.

Jimmie connects you with another person who wants to talk about problems with alcohol or drugs, loneliness, relationship issues, or, on a lighter note, the Olympic Games in Rio.

Unlike Koko and Crisis Text Line, Jimmie gives no guidance to people who want to be a good listener or offer advice, and unlike the aforementioned services, Jimmie can connect you with people based on location.

Unfortunately, a test of this feature found no users near me in San Francisco. Maybe this one needs more time to find a larger audience.

Honorable mentions: On the pop culture/celebrity end of the bot ecosystem spectrum, Katy Perry has a bot to sell you her latest perfume, and DOM the Pizza Bot from Domino’s is just a few days old.

How was your experience using these bots? Know any bots we should be writing about? Ping Khari Johnson on Twitter and let me know.