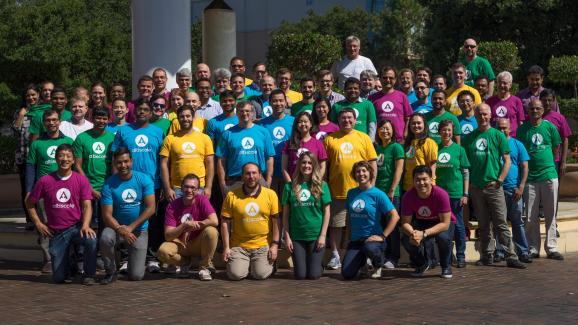 Enterprise software company SAP is acquiring Altiscale, a startup that offers a cloud-based version of the Hadoop open source software for storing, processing, and analyzing lots of different kinds of data, VentureBeat has learned. News of the deal should be announced in the next few weeks.

The deal could be valued above $125 million. The investors are slated to receive three to four times as much money as they have put in, a source familiar with the matter told VentureBeat. The startup has raised at least $42 million in venture capital, including a $30 million round announced in December 2014. Investors include Accel Partners, AME Cloud Ventures, Northgate, General Catalyst Partners, Sequoia Capital, and Wildcat Venture Partners.

SAP has taken steps to enhance its cloud software portfolio. This deal gives SAP one of the best known providers in the category called Hadoop as a service. Altiscale’s founder and chief executive, Raymie Stata, sold his company Stata Labs to Yahoo in 2004 and worked on the deployment of the Hadoop software within Yahoo. Stata and his team could be useful for SAP as competitors like IBM and Microsoft put a higher priority on cloud.

Altiscale’s competitors include Qubole and Xplenty. Amazon Web Services (AWS), the top public cloud infrastructure provider, also offers a distribution of Hadoop. In addition to a cloud implementation of Hadoop, Altiscale also provides a cloud version of Apache Spark, a faster, more modern alternative to Hadoop, which relies on the MapReduce framework — and that means it goes up against Databricks, the startup that has popularized Spark and offers Spark in the cloud.

The promise of running this software in the cloud is that companies don’t need to add lots of new servers, storage, and networking infrastructure in data centers to take advantage of it and employ people who are well versed in dealing with the software.

In March Altiscale introduced the Insight Cloud service, which enables business-intelligence tools like Tableau to hook into and query data from Hadoop and Spark clusters.

Altiscale started in 2012 and is based in Palo Alto, California. It was initially called VertiCloud. The company grew to more than 90 employees, although several employees have left this year. Customers include Devicescape, Glu Mobile, MarketShare, and ShareThis.

Update on September 9: SAP announced its Altiscale acquisition during a town hall meeting for employees in the Bay Area on September 6; tweets from the SAP Silicon Valley account show Altiscale employees onstage at the event alongside SAP executive board member Bernd Leukert.

Update on September 21: The German business newspaper Handelsblatt reported that Leukert talked about the acquisition on September 20 at the annual conference of the German SAP user group Deutschsprachige SAP-Anwendergruppe (DSAG).