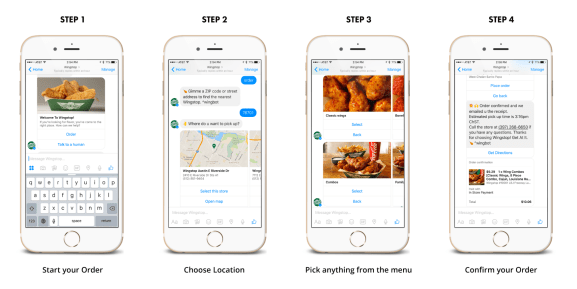 Convenience is a cornerstone of any effective commerce strategy. How quickly and seamlessly we can satisfy the end consumer’s needs through digital commerce is critical to overall success. If we can do it better, with a more genuine and easy-to-understand experience than the other guys, then we win. If not, then we leave ourselves vulnerable in the hyper-competitive digital marketplace. If you need an example, just look to the meteoric rise of services like Uber and Lyft and the impact they’ve had on the stagnating transportation industry.

In the restaurant space, this means we have to continually innovate to meet our customers wherever they are and broaden the channels through which they can order our food.

Restaurant and retail ecommerce channels traditionally consist of a desktop website, a mobile website, and a couple of native apps for the major smartphone platforms. From there, the formula is fairly commonplace: Launch with a good UX in these channels, layer in strong digital marketing, maintain a healthy pipeline of features and offerings, measure your conversions, then continually iterate on that formula to keep the needle moving in the right direction.

Based purely on the numbers, this works. According to Forrester, ecommerce captured over $330 billion in the U.S. in 2015. They also forecast a continued 10 percent compound annual growth rate for ecommerce in the U.S., meaning by 2020, digital sales in the U.S. will surpass $500 billion. Half a trillion. And those dollars are up for grabs.

Along with massive growth, however, comes overcrowding in the digital marketplace. Thousands of brands are competing for space on the coveted phone home screen. It’s an area the size of your hand, an icon the size of your fingertip. And consumers value their smartphone screen real estate — there’s only so much space to go around.

Restaurant brands have it particularly tough when compared to top-of-mind apps like Facebook, Netflix, Pandora, email, photos, and videos. The space occupied by daily-use apps makes it increasingly difficult for a less frequently used food-ordering app to earn that prized spot on the home screen. That doesn’t mean mobile apps don’t have a solid place in ecommerce strategy; rather, it just reinforces that brands must continue to find innovative, additive ways to fuel the growth of their digital ecosystems.

At Wingstop, we’ve turned our attention to being conversational with our customers via the personal communication lines they already have on their mobile devices. This empowers our customers to interact with us according to their own preferences. By offering message-based or chat-based ordering channels, we’ve widened the top of our ecommerce funnel for the convenience of our customers. This not only drives transactions, it also helps establish trust with our customers that Wingstop will meet them where they are.

Facebook is calling the shift toward chat an “evolution of conversation,” and they presented a multitude of statistics earlier this month to support that assessment. The one that stands out the most? In July, the company surpassed one billion active users on Facebook Messenger. The rise of this and other chat-based platforms, like Slack, is a clear indication that the most convenient way of communicating is informal conversation and chat. The rise of chat as a transitory typed digital medium mirrors the succinctness of a quick phone conversation, as opposed to a carefully crafted email or formal meeting.

Wingstop is starting to have conversations with our customers where they are and via whatever channel is most convenient for them — whether that is Facebook Messenger, Twitter, SMS, or even verbally via Amazon’s smart audio device, the Echo. Wingstop provides FAQs and an ordering system in the bot, which is what millennials are demanding.

Expanding our digital ecosystem into chat-based and message-based technology helps us meet consumer demand when they need it. They simply message us via the various platforms they are already using to tell us they want to order food. Our bot — Wingbot — can quickly help a customer with a reorder. Wingbot also asks where they want to pick it up and how they want to pay and places their order for them.

Conversational commerce is a promising channel for driving growth in our digital business, and we’re excited to be on the leading edge of it.