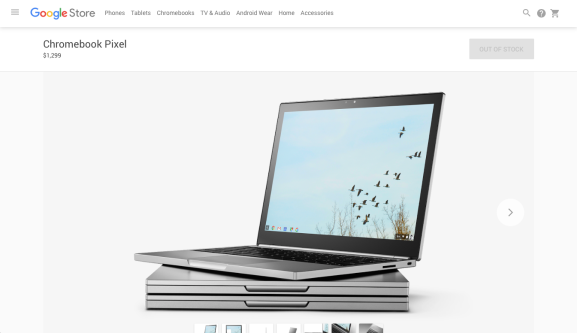 The Chromebook Pixel 2 on the Google Store.

The Chromebook Pixel 2 — the second generation of Google’s first-party Chromebook Pixel laptop running Chrome OS, and the fanciest Chromebook to date — has gone out of stock on the Google Store, and it’s no longer available from Best Buy, either. It turns out that Google has chosen to discontinue the product.

The $1,299 computer became available in February 2015 alongside a $999 version that was discontinued in April.

“We’re committed to the Pixel program but we don’t have plans to restock the Pixel 2,” a Google spokesperson told VentureBeat in an email.

One feature that distinguished the Pixel 2 — and its predecessor, the 2013 Pixel — from other Chromebooks was its touchscreen. It’s something that people will likely want in a Chromebook in the months and years to come now that Google is bringing the Play Store to Chrome OS, which makes it possible to run Android apps on Chromebooks.

A job description that surfaced earlier this year suggests that Google is working on a new Chromebook Pixel.

But for now, people can still buy the Pixel C Android tablet, which is available with an optional pairing keyboard and was developed by the same team that came up with the Chromebook Pixel.

Google has not disclosed sales figures for its Pixel devices.