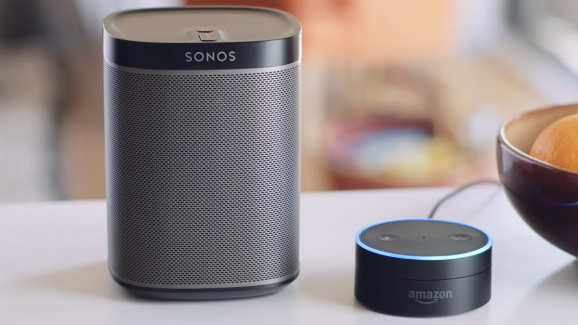 Sonos' Play 1 Speaker, pictured with Amazon's Echo Dot, at a 2016 event announcing a partnership between the two companies.

Amazon’s voice assistant Alexa is coming to Sonos speakers in 2017, and you — a Sonos owner, an Echo beta tester, or maybe both — are naturally curious:  “How will it work?” “Do I need new speakers!?” “What does this mean???”

Everything’s OK — we have some answers now.

While Sonos left a few details in the dark ahead of the 2017 launch, here’s a list of everything we know so far.

Sonos is partnering with Amazon because it believes voice assistants like Alexa represent the future of how people will listen to music at home.

Sonos says it will add Alexa support to all existing speakers via a free software update sometime in the year 2017. We’ve heard hints of an “early 2017” release, but a company spokesperson wouldn’t say exactly when the public release will arrive.

How will it work?

Can I try it early?

Sonos plans to release a “private beta” in 2016, but the company hasn’t shared how many people will get it and when. Sonos also wouldn’t tell us how you, dear reader, can sign up. Good luck!

“It will be a pretty small pool this year,” said Sonos partnerships and product exec Ryan Taylor.

Update December 29, 2016: When pressed for details on the beta, a Sonos spokesperson added, “Our engineering teams are making excellent progress. As we announced in August, the Sonos and Alexa integration will be broadly available publicly in 2017.”

What will I need to control Sonos via voice?

Minimum: One Sonos speaker and one Amazon Echo device or Fire TV.

Can I use the speakers I already own?

Yes! According to a Sonos spokesperson [emphasis ours]:

Voice control for Sonos will be available as a free software update that will work with existing Sonos products and Alexa-enabled devices.

Do I have to buy Amazon’s Echo or Fire TV?

Yes. Sonos and Amazon aren’t putting Alexa inside Sonos hardware yet and Sonos declined to say if future Sonos speakers will ship with Alexa and built-in microphones.

Doesn’t the Play 5 have two microphones?

Yes! But according to Sonos, those currently unused microphones won’t ever be used to enable Alexa. They aren’t “far-field voice capable” and were originally added to work with Sonos’ Trueplay tech. The company decided later to exclusively use its app to tune speakers, according to Taylor.

Can I plug an Echo into my Play 5?

You can plug an Echo Dot into a Play 5 via line-in, but you won’t be able to control other speakers or groups of speakers. Other missing features include Sonos-specific voice commands and integration with Sonos’ app. There are also services that Sonos supports that Alexa does not, like Apple Music.

Will Sonos release hardware with Alexa built in?

Sonos won’t say. According to Taylor, “We have a long term strategic collaboration with Amazon … I can’t comment on more. There’s a lot of work to do.”

“Ugh.” Oh, hey, sorry, here you go: Alexa is Amazon’s voice-controlled personal assistant. It’s like Siri and Google Now. You can find it inside Amazon’s Echo devices, its Fire TV streaming box, and in third-party gadgets like this fridge speaker.

Integrating with existing Alexa APIs apparently won’t work, in part because of Sonos’ multi-room functionality. According to Taylor:

What we’re doing is building more than what exists today. There’s the AVS SDK, the Alexa Skills SDK — we’re actually building on top of both of those and pushing both of our platforms forward together, which is why there’s this joint development effort. There’s not really a defined way to control multiple zones from a single Echo device today.

“This is not an Alexa skill,” a spokesperson for Sonos later clarified. (Thanks @markcwebster)

“We definitely see a future where there’s options for voice control,” Taylor told VentureBeat. He added:

Just like we do with iOS, and Android, and desktop — and multiple music services — we want to be able to interface with multiple assistants over time. We don’t have anything to announce there, but the way we think about that world is very similar to the way we think about smartphone platforms … and we’re going to bring it to market to consumers as it becomes available.

Can I control Sonos via the Alexa app?

No matter what, you’ll need an Echo device to use Alexa with Sonos next year. But you may need the apps to set everything up, according to a Sonos spokesperson:

The current plan is that during setup you may need to authorize music services with both apps, then simply use commands to play and control, but the goal is to make the process even simpler and we will always work to improve the experience over time.

Can I pick a default music service like Spotify?

Yes, you’ll be able to set a default music service like Spotify, a Sonos spokesperson told VentureBeat. “When we launch, at minimum, we will support the current lineup of music services that are compatible with Alexa,” the spokesperson added. (Thanks: @Peter)

Sonos won’t say. A company spokesperson told us, “We’ll have more details to share on the experience with Sonos and Alexa in 2017.” (Thanks @rxlowry)

Can I use Amazon’s Echo as a second Sonos speaker?

Sonos won’t say if an Echo can double as a second Sonos speaker — “We’ll have more details to share on the experience with Sonos and Alexa in 2017.” (Thanks anonymous)