I’ve not been a fan of the smartwatch, partially because it lacked the design flair of traditional analog watches. Samsung knows about that issue. In fact, the electronics manufacturer believes that’s why consumers new to this category have shied away. That’s why the company on Wednesday unveiled the byproduct of its research: the Samsung Gear S3.

Available in Classic and Frontier models, the Gear S3 offers a premium look that’s not only for casual experiences, but also is rugged enough for outdoor activities such as biking, running, and climbing. “It’s the best of design, but no compromise on functionality,” a Samsung spokesperson told VentureBeat. While both versions show updated designs, there is a difference between them: The Classic is limited to Bluetooth connectivity, while the Frontier supports that and LTE. Both have Wi-Fi capabilities.

Pricing as well as a preorder date have not been revealed for the Gear S3. However, since these two models are more on the luxury end, you might expect this to run a bit more than what you’d normally pay for previous editions of the Gear smartwatch, which recently was $299.99. 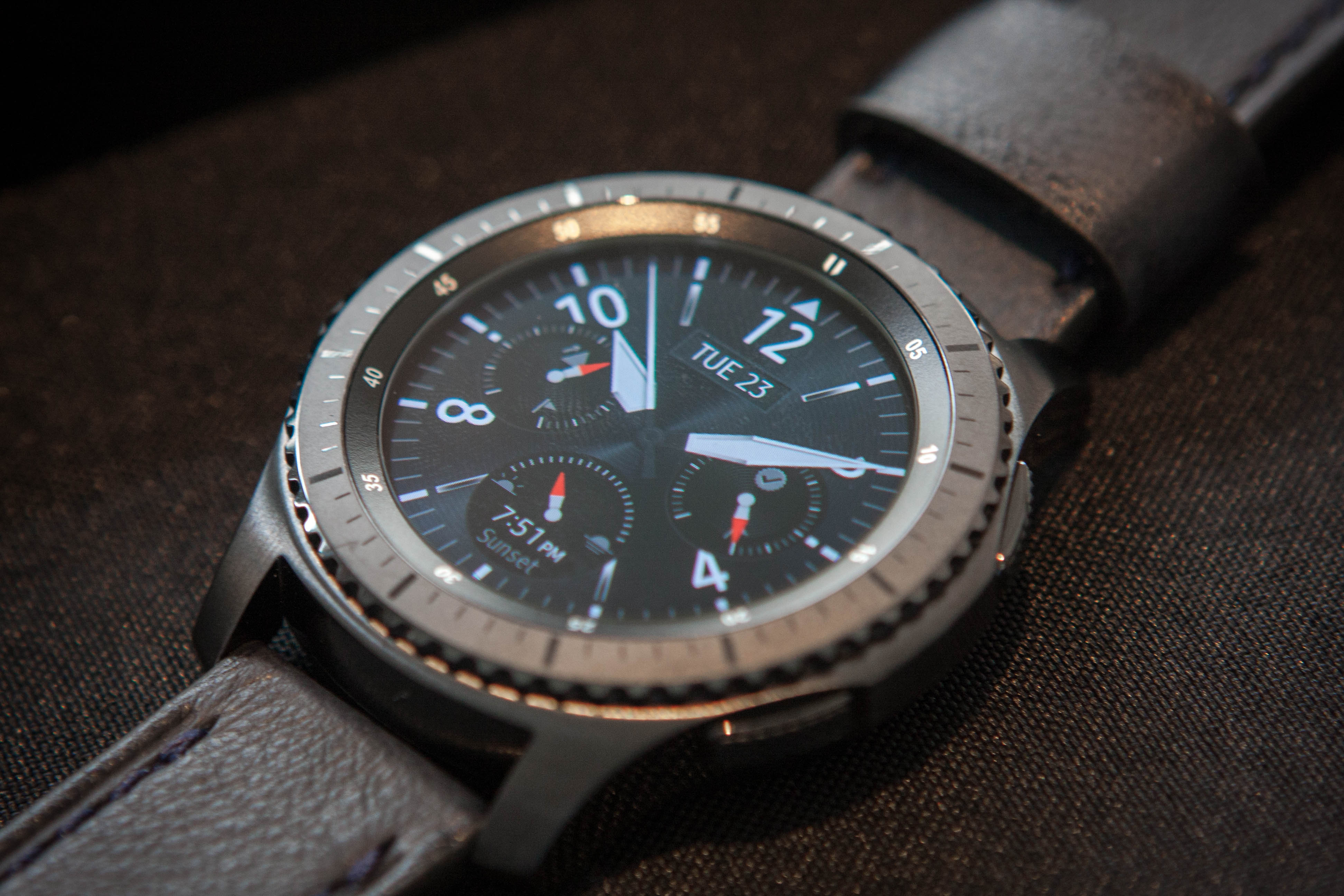 Samsung has pulled out all the stops to make its newest smartwatch shine. It has a 1.3-inch super AMOLED full circular display with a 360×360 resolution (278 dpi) that supports a variety of watch faces, something the company said was the most downloaded category. The device also supports 16 million colors through its Always On display, compared to just 8 colors on its predecessor, the Gear S2. The Gear S3 comes equipped with a circular bezel that can be used to accept or reject phone calls or calendar notifications. Sensitivity on the display has been enhanced to work even if you’re using gloves. 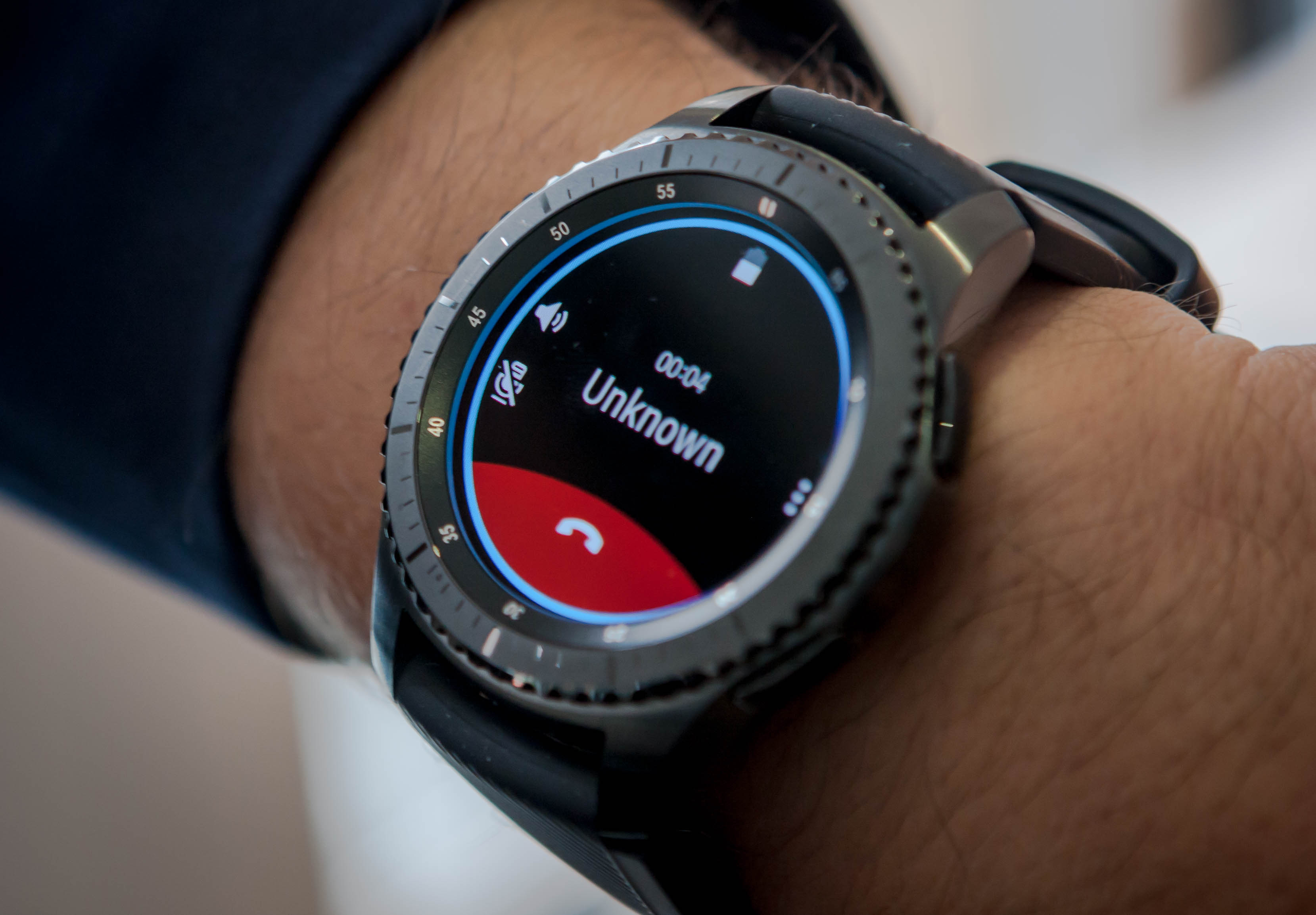 Above: Taking a phone call on the Samsung Gear S3.

There’s also a built-in speaker that lets you talk directly into your watch so if you get a phone call, you can answer it like you’re Dick Tracy or Michael Knight from Knight Rider. Through its partnership with Spotify, Samsung supports streaming music through the Gear S3 using Wi-Fi or LTE.

The dimensions of the watches have changed slightly, with the Classic spec’ed at 46 x 49 x 12.9 mm. The Frontier weights a bit more than the Classic, at 62 grams versus 57 grams.

For those who exercise or do physical activities and find carrying around a phone unwelcoming, the Gear S3 Frontier comes with LTE support, making it one of the first to offer this capability. Previous Samsung smartwatches featured 3G service. The hope is that Gear S3 Frontier wearers will go out jogging, biking, mountain climbing, and swimming without their phone in tow. 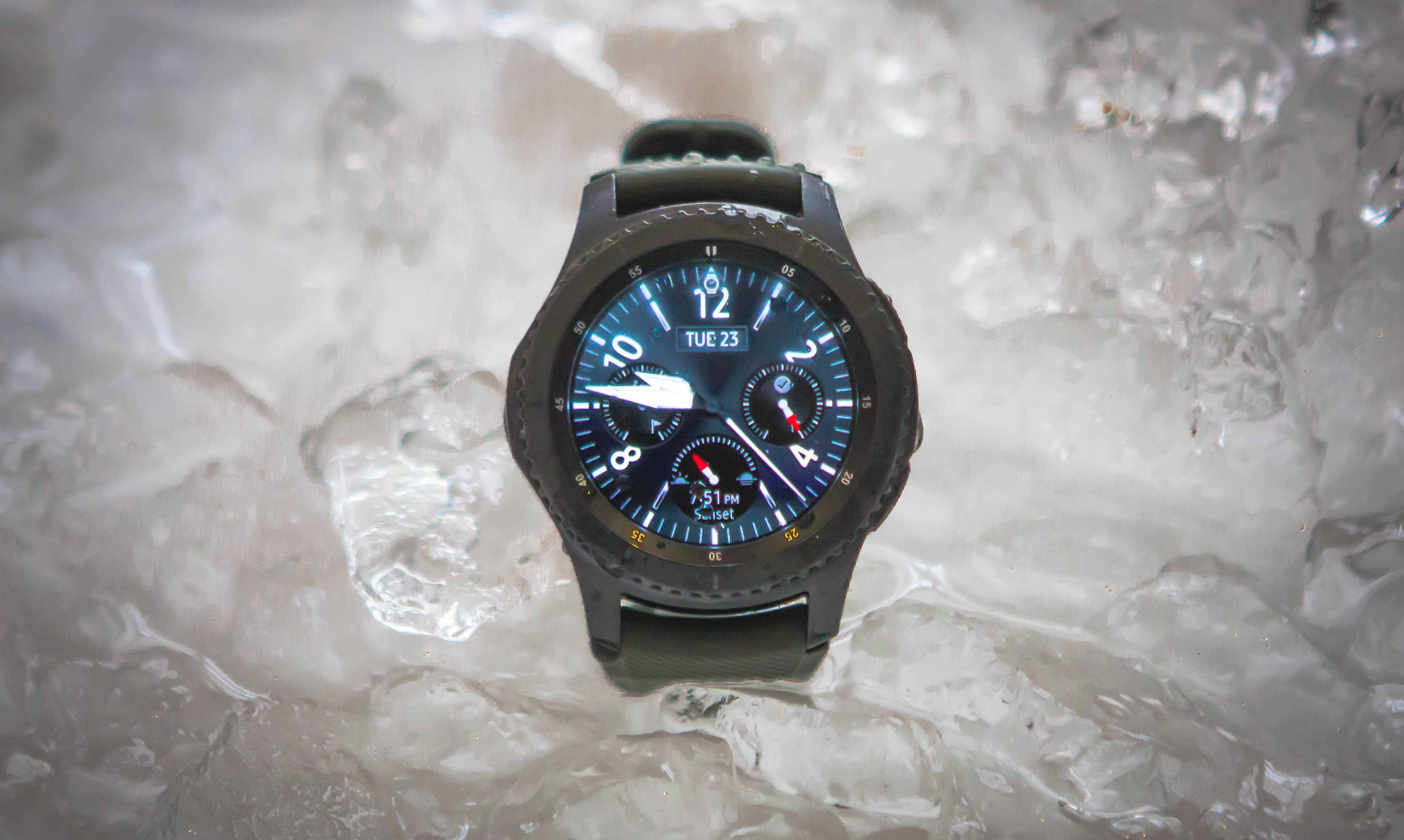 Both versions of the Gear S3 carry with it the protections that have become synonymous with Samsung’s Galaxy phone lineup, including having a IP68 rating so it’s dust and water resistant (up to 10 feet for 30 minutes), and is scratch resistant thanks to the Corning Gorilla Glass SR+ technology, which was made specifically for smartwatches. Because it wants people to use its smartwatches in extreme conditions, Samsung has even made the Gear S3 military-grade durable, meaning that it’s really strong, protected against accidental damage, shock and dust resistant, able to withstand varying high and low temperatures, and operates in altitudes of up to 15,000 feet.

Personal safety has also been addressed, with the inclusion of a barometer to notify you if it’s about to rain, GPS tracking, speedometer, and SOS, which you can use to notify friends and family if you’re in an emergency by simply triple-tapping on the screen to activate.

Both Gear S3 Classic and Frontier come with a 380 mAh battery, which is estimated to last up to four days. It does have a power-saving mode that means that even if it the battery life gets to 5 percent, there will be enough power so you can tell the time. By comparison, the Gear S2 has a 250 mAh battery for its Bluetooth model and 300 mAh for 3G. 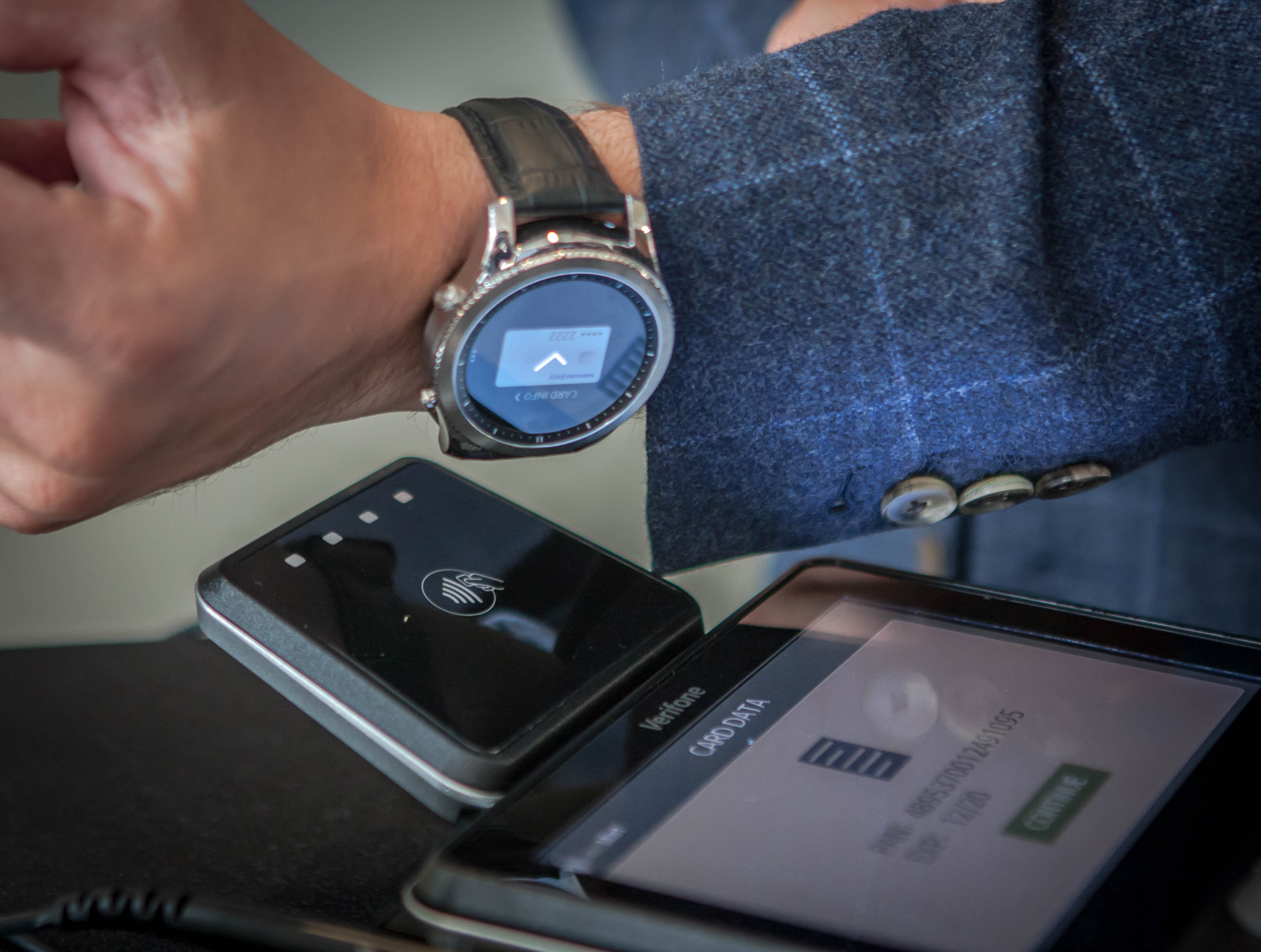 Above: Using Samsung Pay with the Gear S3 smartwatch.

Samsung Pay also comes installed on the Gear S3 so you can pay without needing to take out your phone — if you have the LTE version, you can leave your mobile device at home and pay with your smartwatch. Just hold the back button on the Gear S3, set up Samsung Pay, add your card, and then use it to pay at any payment terminal. Samsung said that the information is stored as tokens on the devices and protected using Samsung Knox. It has not only NFC support but also MST technology, so it should work on 90 percent of terminals in the U.S., according to the company.

Like previous Gear smartwatches, the S3 comes with the Tizen operating system installed. While there are hardware and software improvements to the latest model, all apps are compatible with the S3, but Samsung added that it’s going to release an updated SDK in the future. The company said that some of the apps already leveraging the Gear S3 capabilities include Spotify (streaming music through the device), ADT (offering a premium service with a call center), Nest (dial in different profiles for your home, control temperatures, adjust fans), BMW (functionality built in through Bluetooth), and Uber (addition of a widget to summon a car to your location using Google Maps and quicker access to Uber Pool). 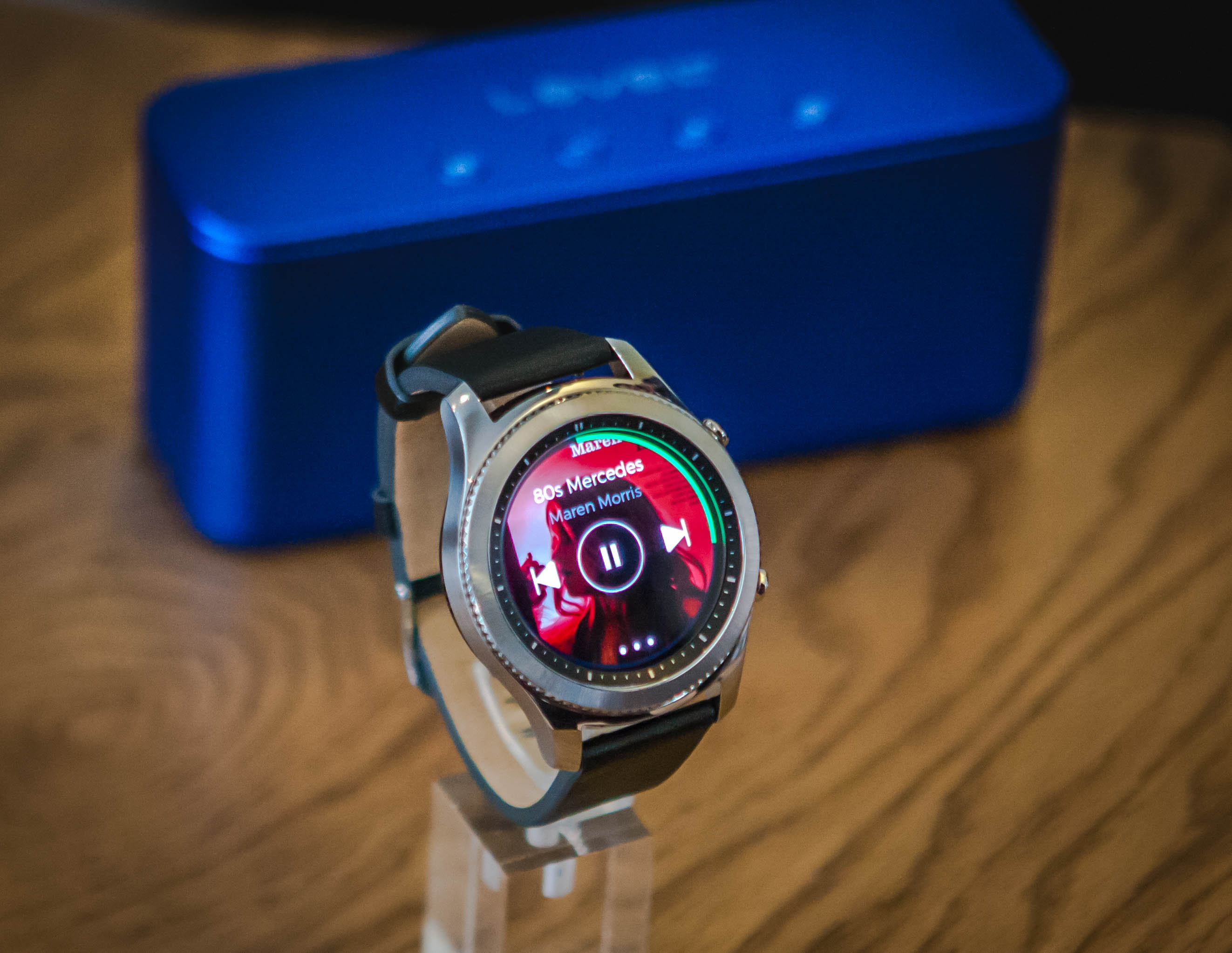 Above: Playing Spotify music through the Samsung Gear S3 smartwatch.

And if you’re curious, the Gear S3 supports the same wireless charging technology of previous models so you won’t need new adapters or chargers. It also comes with a 22 millimeter wrist strap in a variety of colors — but if you don’t like what Samsung offers, you can find another brand that’s the same size and use it, such as Google’s Mode wristbands.

Having a smartwatch is a good way for people to monitor their activities while exercising, but there’s also an audience of people possibly interested in using it to help them get through the day. Those latter users are more concerned about the design — while previous iterations looked good, they didn’t measure up to luxury analog watches.

Samsung hasn’t disclosed which carriers will power the Gear S3, but it’s likely that the major ones in the U.S. will support it. If the Gear S2 is any indication, it’ll be available on Verizon, T-Mobile, AT&T, and U.S. Cellular.

Gallery: A closer look at the Samsung Gear S3 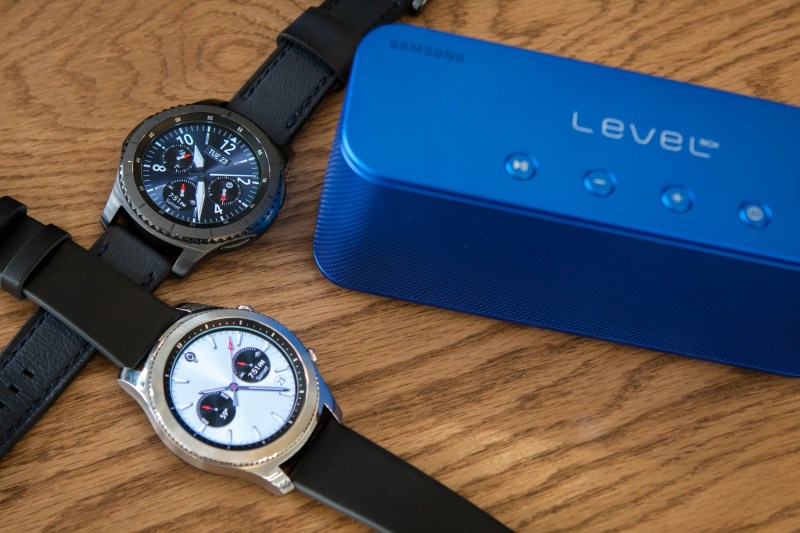 Updated at 10:34 a.m. Pacific on Wednesday: Following the unveiling, AT&T announced that it will offer the 4G LTE-compatible Samsung Gear S3 Frontier and the smartwatch will include the carrier’s NumberSync feature, which allows phone calls and text messages to be sent and received using the same number as your primary smartphone. It did not reveal pricing.