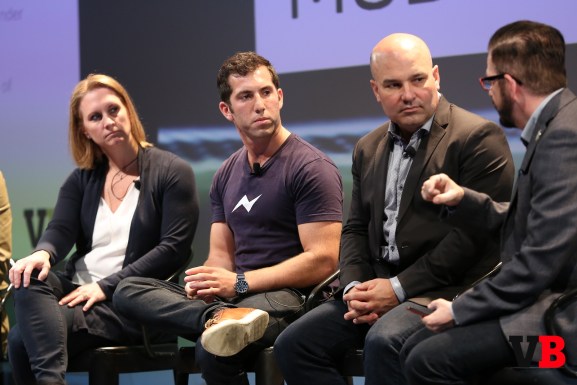 With all the chatter and hype that surround bots, artificial intelligence, and conversational commerce, it can be hard to remember that there’s very little percolating today on chat platforms (with their billions of users) that didn’t exist a year ago.

Since CEO Mark Zuckerberg announced that Facebook would open its platform to bot makers, businesses, and the rest of the world, Facebook has been part of what some refer to as the chat platform “arms race,” as platforms rush to add features and attract developers. Facebook has added a menu, buttons, cards, and rich media to Messenger to accommodate bots. More than 18,000 bots have been made, and Messenger has surpassed one billion monthly active users.

Last week, VentureBeat went to Facebook offices in Menlo Park, Calif. to check in with Facebook Messenger product manager Seth Rosenberg. We talked about his first impressions of the Messenger bot ecosystem, how Facebook measures bot performance, and why Facebook hasn’t created a bot store.

This interview has been edited for brevity and clarity.

VentureBeat: You’re product manager of a platform used by more than a billion people. That’s an incredible potential for impact. Since you started at Messenger, do any particular moments come to mind for you that demonstrate the impact of the work you’re doing?

Seth Rosenberg: On a personal level, my family is spread around the world — my brother is in London, and my dad and sister are in Canada. We have a family group thread to stay in touch. This was especially valuable when my mom was battling breast cancer. Messenger helped add a little humor to tough situations through stickers and GIFs and helped make us feel closer.

Another rewarding experience for me is meeting and working with developers and entrepreneurs who are innovating and creating new services on top of the tools we offer — like the team behind Trim, a company that helps people manage their personal finances, or my friend who is working on a women’s health service that can be delivered with Messenger. The scale of what we do is humbling, and I feel grateful to be a part of it.

VB: Have you seen any initial trends in the bot ecosystem? Do any categories come up more than others?

Rosenberg: There’ve been a lot of cool travel bots, maybe because it works really well on mobile, you know Skyscanner, Hipmunk, Kayak. There’ve been a lot of media experiences, like the NBA and TechCrunch, a lot of hybrid-like app extensions, app replacement-customer service combined. That’s kind of like the KLM example. Then there’s a lot of kind of fun and entertaining ones, whether it’s trivia games or Icon8, that are good consumer experiences.

VB: What are Messenger’s key performance indicators (KPIs)? What metrics does Messenger follow when you look at a bot’s performance?

Rosenberg: So [there’s] retention, engagement, all the classic kinds of consumer metrics that we look at to just get a read for how valuable these experiences are. Does it impact the overall Messenger experience? Are [users] coming back and using Messenger more because they find more utility in using these bots?

Then we also care about making sure that developers are successful, and one of the key metrics there is just — for the really good ones — what’s the reach they can achieve? I think we announced a few case studies of Call of Duty bot where they had a cool combination in their game. They upsell “now you can talk to the captain” as sort of an extension of the game on Messenger, and I think we announced there were about six million messages sent [in its first 24 hours].

VB: So your Cisco Sparks and Slacks of the world focus exclusively on enterprise. The narrative I’ve heard and the bots I’ve seen a lot from Messenger thus far mostly focus on business-to-consumer chat, but are there enterprise bots on Messenger? Is that something that might increase with, for example, a Facebook at Work?

Rosenberg: Yeah that hasn’t been a big area that I’ve seen on the platform yet, but Messenger’s strength is it’s…over a billion users and more of a consumer platform. But I wouldn’t rule that out based on things I’ve seen. It’s not a use case we’re currently focused on.

Again, part of the original vision for this is how do we make Messenger the most useful, most engaging communication platform on your phone and [one] that includes not just talking to people but also businesses? And that’s kind of our core strength, but, again, the platform is relatively flexible, as you know. That’s the nice thing about this open platform. We’ve been able to empower so many entrepreneurs who are willing to experiment in this space, and we have to grow together, so, yeah, we’re not opposed to any good use cases that come out.

VB: How do people find bots today? Like if I want to find the range of different bots available, how do you even do that? How do you start?

Rosenberg: In Messenger, the easiest way to do it is through search, and we have featured bots in search. And then for whatever bot you’re looking for, in my case, like, Kayak…it’s a brand I know and it’s, like, OK I want to use it on my phone, so I just search for Kayak. We also have a ton of tools that we’ve made available for developers to promote their bots. So we have Messenger codes where they can put their codes on a website, or an email, or printed material. They have links, like short links, inbound lead links — they can use Facebook and [their] news feed to get the word out there.

They also like web plugins. They’re a really good way of getting their audience to use the bot so that’s like the KLM example where you’re going through the checkout flow, and you have a check box — “Get updates on Messenger” — and it sends you a message. After that, if they want to re-engage with KLM, now they know that it’s available. So there are a few different examples.

VB: Does Messenger want to continue to have discoverability through these different means or is there a bot store coming at some point?

Rosenberg: Our number one priority was to just give [the platform] to developers and help them to create great experiences and help them to promote the bots wherever it makes sense. Then the next step is — once we do have a wide range of great experiences, that’s when we can start surfacing them more in front of people in contextual ways. So, yeah, it’s definitely something we care about and we’ll keep investing in.

VB: Ha, you could do that. Thanks for your time.