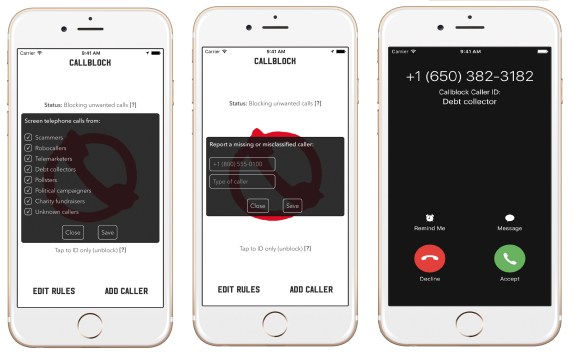 App development agency Rocketship today announced Callblock, an app for iOS 10 that will let you block calls from telemarketers. The launch comes a day before Apple holds an event in San Francisco where it’s expected to unveil new iPhones and announce plans to roll out iOS 10 to all users.

Rocketship previously developed the Adblock Fast app for iOS, and the company sees Callblock as a sort of extension of that app.

“We built on our experience filtering online advertisers to compile, classify, and apply what we think is the world’s biggest directory of telemarketers, with millions of entries from almost every country in the world,” Rocketship founder and chief executive Brian Kennish wrote in a blog post.

Callblock allows users to allow or block calls from scammers, robocallers, telemarketers, debt collectors, pollsters, political campaigners, charity fundraisers, and unknown callers. It’s possible to get a caller ID alert for incoming calls from telemarketers instead, if you’d prefer that. The app draws on a directory of telemarketers with more than 2 million entries and is regularly updated to reflect the latest information.

The app isn’t available today, but it will be when iOS 10 is released. Early access is available for free. After it’s released, the app “will likely cost $0.99 for monthly subscriptions and be discounted for longer plans,” Rocketship says on its website.

Rocketship started last year and has offices in Palo Alto and San Francisco.