The Amazon Echo is finally available to buy outside the U.S., as the internet giant revealed to a packed audience in London that the voice-activated speaker is coming to the U.K. and Germany, starting today.

A spokesperson confirmed that the Echo Tap will also be launching outside the U.S. at some point, but no time frame was given.

Following an invite-only period that kicked off almost two years ago, Amazon launched the $180 Echo in the U.S. in July 2015, and the product line has been generally well-received. In March this year, Amazon introduced two cheaper versions to the mix, the Amazon Tap and the Echo Dot.

In its simplest form, the Echo is a cylindrical, Wi-Fi-connected speaker that serves as an “always-on” assistant. For example, you can ask questions about the weather, traffic, or other information that can be easily searched on the web.

But more than that, the device embraces the Internet of Things (IoT) by making it possible to control home appliances with your voice. Indeed, to leverage the full power of the unit you probably need to invest in additional connected products, such as the Belkin WeMo Switch or the WeMo Insight Switch and Light Switch. Elsewhere, the Hue A19, Lux, BR30, Bloom, and LightStrip are also supported by the Echo to help you control the lights in your home by issuing vocal commands, always preceded by “Hey, Alexa.”

Alexa, the cloud-based “brain” and voice that powers the Echo, is also open to third-party developers who can give Alexa more abilities using the Alexa Skills Kit. It basically helps Amazon and the Echo reach scale quickly by integrating with services that millions of people use.

To date, Alexa has more than 3,000 skills under its belt, and a number of local partners were announced at the event in London that kicked off its European launch. Partners include myriad smart-home companies, such as Tado, Honeywell, and Hive. 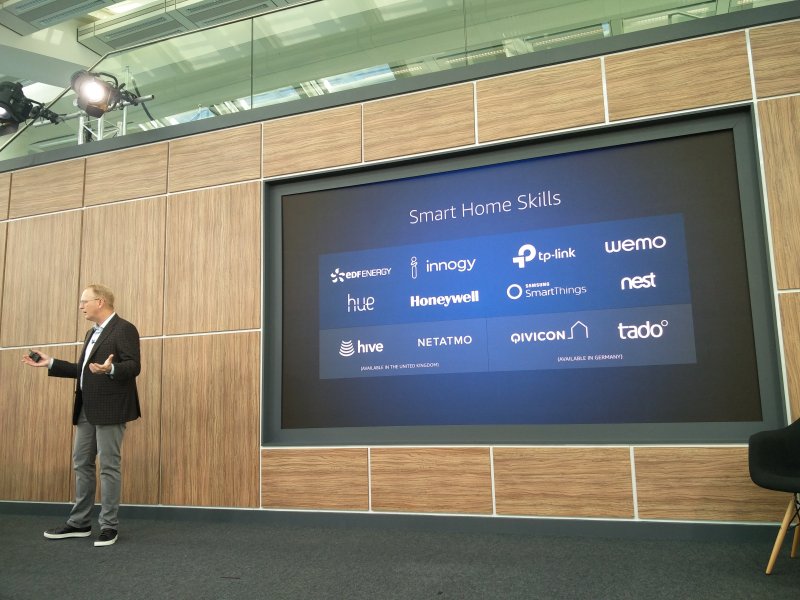 True to form, Amazon has been slow to bring the Echo to new markets, as it has been with most of its new product launches. But with the Echo, which relies on an ability to recognize voices, the delay in going global is certainly understandable — accents and colloquialisms can make things a bit tricky.

Localization includes being able to tailor answers to the location of the user. As an example, “Alexa, how do you spell ‘colour / color'” will garner a different response depending on whether you’re in the U.K. or the U.S.

Much has changed in the smart assistant hardware realm since the Echo went to market in the U.S., with Google recently unveiling its Echo-competitor, called Home, and Samsung seemingly working on a similar device (though Samsung’s appears to be at a much earlier development stage).

But the Amazon Echo’s expansion into Europe is a notable evolution for a fledgling product line that has shown some promise but has yet to reach real scale. Being able to buy this product line in more markets can only help that cause.