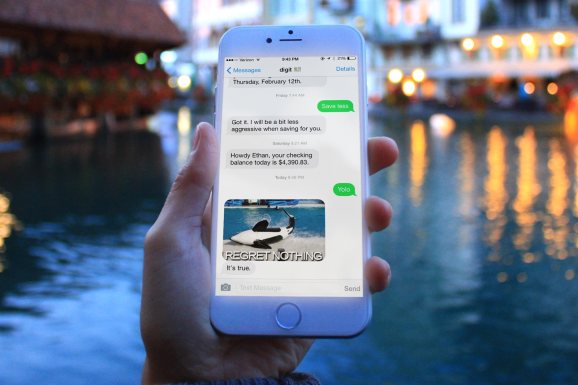 The bot Digit has saved $230 million for its users in the past 18 months, founder and CEO Ethan Bloch told an audience of more than 200 at a “Leaders of Chatbots” discussion at LinkedIn Tuesday. The event was put together by Leade.rs, which hosts monthly conversations with influential tech insiders.

The way Digit saves money for people is really simple: Connect your bank account to Digit, and the bot will follow your spending habits and take out an amount small enough so you don’t feel its absence. The money is then set aside in a separate bank account. Digit savings accounts are currently supported at more than 2,500 FDIC-insured banks and credit unions in the United States.

“The actual savings process is entirely automated. You don’t set a transfer, you don’t tell it when to save, when not to save, it is an entirely autonomous savings bot,” Bloch said.

Typical savings deposits range from $5 to $50. No savings over $150 are withdrawn from a user’s account. If Digit overdraws your checking account, you get paid back. Digit started on SMS and is now available with iOS and Android apps, with a Messenger bot coming soon.

Digit is part of a field of personal finance and savings bots that have saved people millions of dollars.

Trim on Messenger lets people ask questions about their own finances and and cancels unwanted subscriptions. PennyCat helps people find coupons for more than 100,000 stores, and Bond learns your goals and then automates saving money.

“This is the idea of technology on your side, technology fighting for you, and it’s a really beautiful concept,” said Phil Libin, who asked the questions in the Q&A session.

Inspiration to create Digit comes from a mix of science fiction and modern financial institutions’ concern with making money for themselves instead of your saving money, Bloch said. Some of the inspiration for Digit, which he calls a sidekick instead of a personal assistant or bot, comes from the Ender’s Game series, particularly a character named Jane.

“There’s actually a short story of how she comes about. She actually surfaces to (get) Ender to do his taxes because he’s been traveling at light speed for hundreds of years and owes billions of dollars in back taxes,” Bloch said. “This is someone who saved the human race and can’t do his taxes, which I think is where we’re at today for all of us.”

Some banks may be trying to be evil, but there are friendly bankers out there. There’s a system that reinforces an unhealthy status quo where banks fail to look out for your best interest and try to shake you down for cash, Bloch said.

“To be fair, we can sit here and we talk about how evil financial institutions are and all these banks,” he said. “We can do that, but I think a lot of it is just these legacy systems and decisions and not just technical systems but human systems over time that have created this really f*cked up financial status quo where we are forced to make super complex decisions, read disclosures with fine print, what is going on — like, I barely have time to bring my kids to school, much less read this fine print, and yet that is the default for us today.”

To give Digit users more confidence, they created an app — but daily updates are still sent via SMS. “Because we deal with people’s money, we realized that people want to see it, and when we just text people, they’re like ‘OK so this works, but where’s my money?’,” Bloch said.

“We found that with building a native app where you can just see it, it creates this paradigm where they can start associating their money in the cap icon, and it creates a sense of more trust and security,” he said.

When a customer wants their money back in their checking account, they send Digit a text message and it’s transferred back the next business day.

Formerly named Omni, Digit was founded in 2013 by Bloch, Michael Murray, Todd Larsen, and Chris Wilson, and is based in San Francisco.