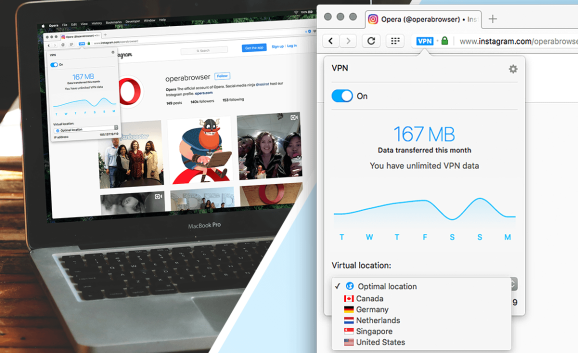 To activate the VPN, head to Settings (Windows) or Preferences (Mac), select Privacy and Security, and turn on the VPN option. The VPN was first unveiled back in April as a beta feature in the developer version, but now, it seems, it’s ready for prime time. “If people knew how the internet truly works, I believe they all would use a VPN,” said Krystian Kolondra, SVP of Opera browser for computers. “By making our browser VPN free and easy to use, we hope to make it an essential tool, just as the lock and key is to your house.”

The feature is a direct result of Opera’s acquisition of VPN company SurfEasy last March, and the two firms first integrated their respective technologies in September with version 32 of the Opera browser — however, users were prompted to install the SurfEasy extension. This represents the first of the major browsers to include a VPN as a standard feature.

One of the selling points of the Opera VPN is that it’s completely free and unlimited. There are many other third-party providers, such as TunnelBear, that provide VPN add-ons for browsers like Opera, but they often come with a limited amount of data and charge a fee to unlock unlimited access.

One downside to the Opera VPN is that it has limited server locations, meaning you can only “pretend” to be in the U.S., Canada, Germany, Singapore, and the Netherlands.

Opera does promise a 256-bit AES encrypted connection, however, and says neither Opera nor SurfEasy store any information about a user’s browsing history. “We know that people are concerned about their privacy online and that the interest for VPN is increasing,” added Kolondra. “However, two major obstacles are blocking people from using it: VPNs are too complicated to use, and they require a monthly subscription. Opera resolves both issues by introducing its free and easy-to-use service right into the browser.”