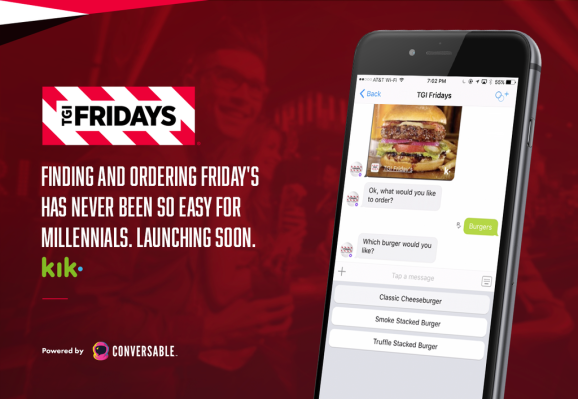 TGI Fridays fans can now use chat platforms to find a restaurant — and, in some areas, make reservations — as multiple bots launch today.

“Looking ahead to fall 2016, Fridays will work with Conversable to expand its online reservations capabilities and also offer online orders via social media channels, including Facebook, Twitter [Direct Message], and Kik,” said Conversable, maker of the TGI Fridays bot, in a statement Tuesday.

Food delivery has emerged as a focus for Conversable, which makes bots for corporate brands.

Since its launch in June, Austin-based Conversable has made delivery bots for Wingstop and Pizza Hut and a recipe bot for Whole Foods. In late August, Conversable partnered with Olo to bring chat-based lunch ordering to more people.

Conversable was created in 2014. Its bot creation platform launched in June after raising about $2 million in angel funding.