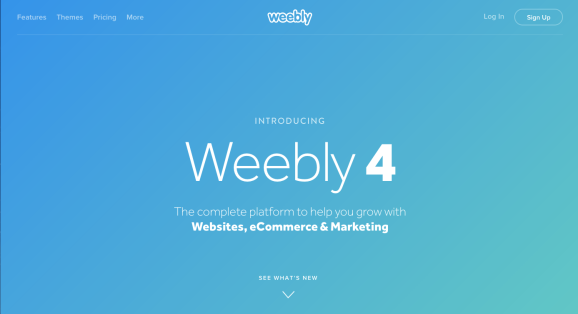 Weebly launched in 2007, at a time when businesses wanted an easy, drag-and-drop, “what you see is what you get” (WYSIWYG) approach to websites. But the space was crowded, and it found itself going up against Wix and Squarespace, as well as Tumblr, WordPress, Facebook, and services from hosting providers like GoDaddy, 1&1, and Web.com.

Time seems to have been on Weebly’s side, however, as it now has 40 million entrepreneurs using its website builder and its ecommerce marketplace. Not one to rest on its laurels, however, the company is launching the fourth generation of its platform today. Weebly has not only evolved its online stores to rival Shopify’s, this offering also includes an email marketing module developed in-house.

The goal, according to Weebly chief executive David Rusenko, is to let entrepreneurs focus on what they love doing instead of spending countless hours trying to figure out how to optimize their online presence.

While websites may not be the most disruptive technology to come out of Silicon Valley, entrepreneurs outside the tech bubble are increasingly enamored of its potential. It’s easy to think that businesses are moving toward social networks like Facebook, Google, and Twitter, or publishing platforms such as Tumblr and WordPress, but Rusenko calls some of those “trends that have come and gone.” Websites offer a place on the internet that entrepreneurs can call their own and give them complete access to their data — no “walled gardens.”

Weebly said that the average small business uses four different online platforms every day. And setting up a website requires more effort today, with business owners needing to set up a responsive ecommerce store and master social media, marketing, and search engine optimization. They also need to integrate accounting software and figure out shipping and taxes. This can be overwhelming. “People were spending more time figuring out technology than their own business,” Rusenko explained. 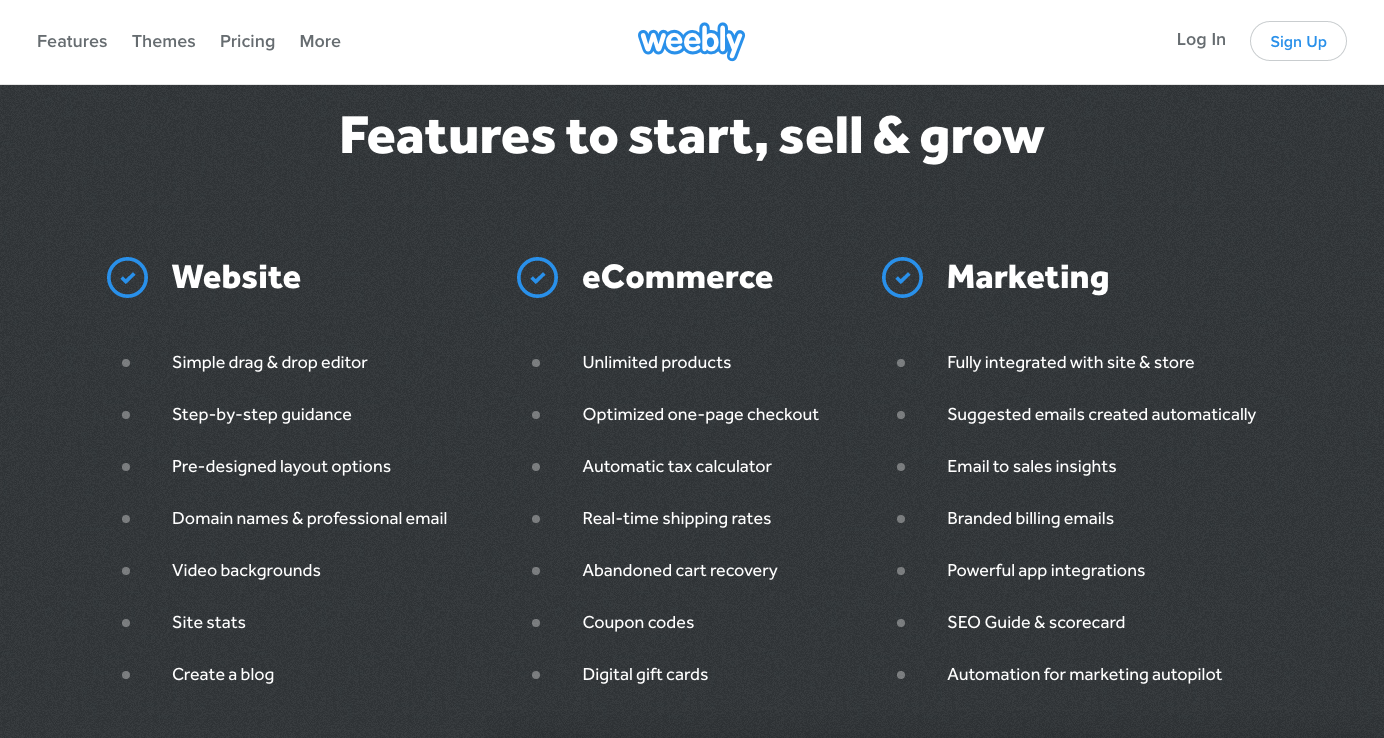 This is where Weebly 4 comes in, as it promises to give entrepreneurs the necessary tools to “start, grow, and succeed online.” From initially helping businesses plant their flag on a little online plot, to enabling transactions for goods and services, Weebly has created a revenue-generating foundation. However, the next step is to provide tools that will bring in traffic and customers, which is where Weebly’s email marketing and intelligence offering comes into play.

Using a homegrown email marketing product powered by its Promote offering, Weebly is giving customers the capabilities of MailChimp with the customization controls they’ve come to expect when editing a website. Triggered emails include the basics, such as abandoned cart messages and confirmation of orders received, gift cards sent, and items cancelled. The product also includes smart grouping, which is essentially targeting emails to specific demographics, like customers who haven’t purchased anything in the last 30 days. 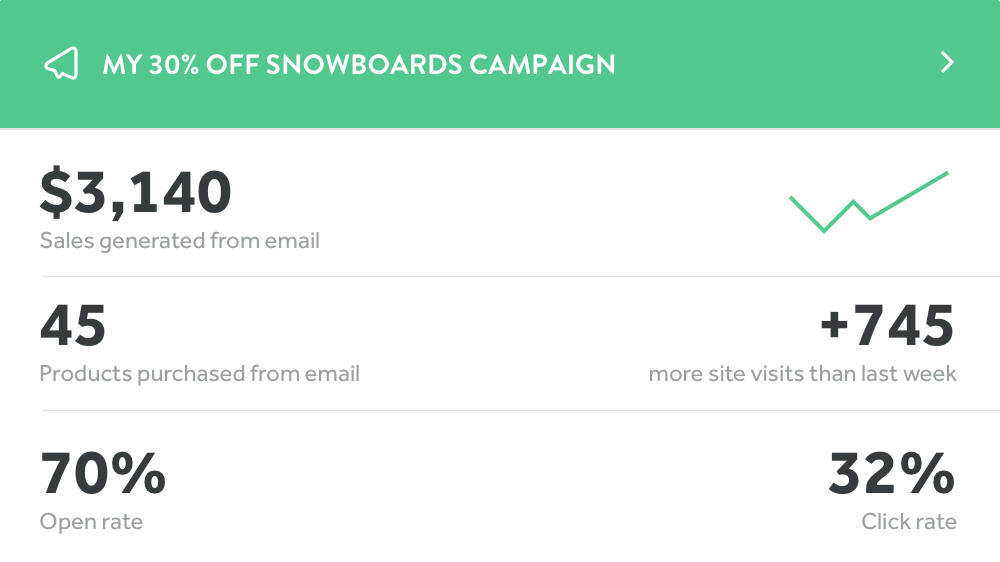 And Weebly’s intelligence algorithm — not to be confused with artificial intelligence — will also make recommendations about emails that entrepreneurs should send. These might include automated campaigns in which monthly communications are mailed to frequent customers, emails delivered on customers’ birthdays, or messages in response to a change in the business’ Net Promoter Score (NPS). For coupons or sales, Weebly’s system will display a prompt asking if you’d like to send an email to customers notifying them of the promotion.

Rusenko assures businesses that the system, which was developed in-house, is in compliance with all regulations, including CAN-SPAM and best practices, and that the company has worked with Internet Service Providers to whitelist its domain.

Full funnel analytics are part of the program, so you’ll know which emails have been opened, bounced, converted to sales, and more. 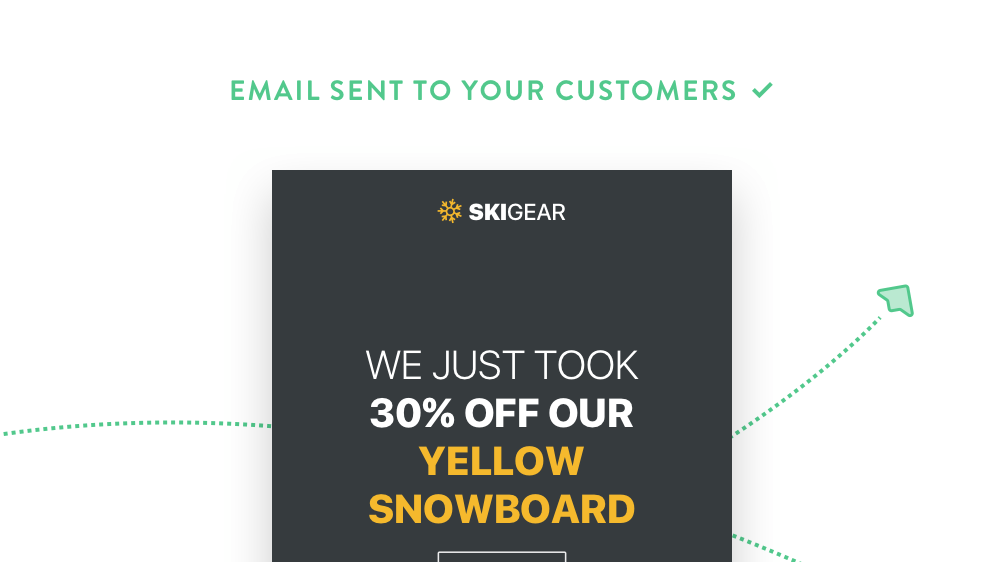 Above: Example of a smart email powered through Weebly 4.

Beyond email marketing, Weebly has revamped its ecommerce product with features that’ll bring it on par with Shopify and other marketplace solutions. And Weebly now provides greater control around customizing the storefront experience. Without needing a developer, entrepreneurs can easily add products, categories, and other details with a drag-and-drop process, all in real time. Previously, Weebly’s ecommerce service was limited to static designs and minor customization capabilities.

Administrators are also able to create gift cards, shipping, and labels, and to automate the delivery mechanism. By using the business’s UPS, DHL, FedEx, and U.S. Postal Service accounts, entrepreneurs can set up a shipping engine to provide accurate rates during the checkout process. “It’s great for small businesses to have this,” Rusenko said. 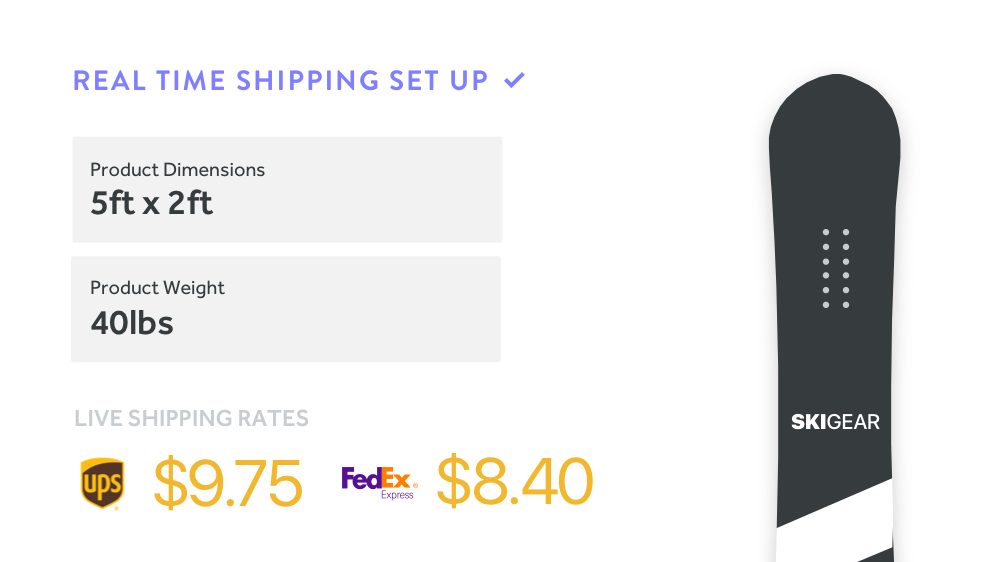 As anyone who’s done it knows, setting up shop online can be complicated, especially when dealing with multiple locations, currencies, shipping, and taxes. All of these make it very difficult to scale businesses, but Weebly believes it has found something that works. What makes it more meaningful for entrepreneurs is that everything is managed under one platform.

One of the final major updates is an enhanced dashboard that administrators have access to when logged into Weebly. If entrepreneurs want a service the company doesn’t have, they’ll likely be able to find a solution in the Weebly app store. And, unlike before, those apps are going to be more in line with whatever Weebly displays on the dashboard.

When you have one of the 200 third-party apps in Weebly’s app store installed for your site, an admin module will appear on the dashboard. It can show you statistics around how many contact form entries you have, the number of blog comments you’ve received, and more.

This is the first step in Weebly’s evolution to be more than just a website creation site, and there could be more updates down the road — such as tools centered around advertising, social media marketing, search engine optimization, and more. With the platform collecting enough data about its customers, we might also see the rise of a CRM offering that’s geared toward small- and medium-sized businesses, Weebly’s target audience.

As Weebly’s success has proved, websites aren’t dead yet. Rusenko revealed that every month, 325 million people visit a site or store powered by the platform — that means half of the U.S. population visits a Weebly-enabled site.

“With Weebly 4, we are helping people conquer the hurdle of getting found online and reaching new customers,” Rusenko said. “Right now, the business of running a business is a real hassle, and our ultimate goal is to make it much easier for our customers, saving them time, helping them grow and be successful, and ultimately, helping them focus more on doing what they love.”